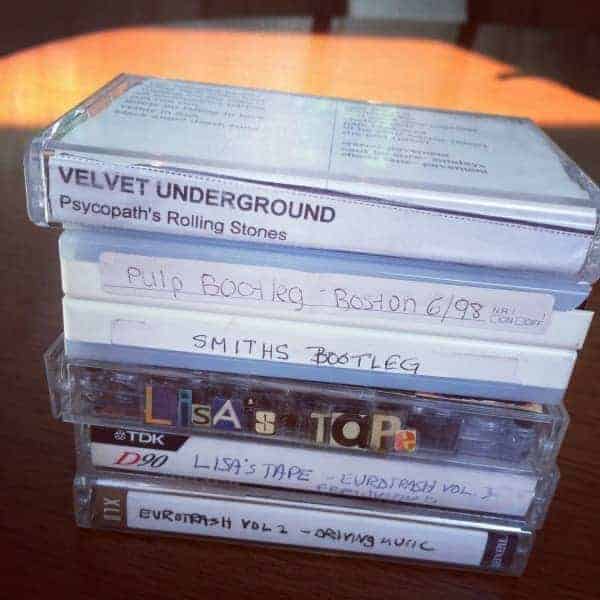 Music has always been a big part of my life. The interests section of my AOL profile (remember those?) in the late 1990s was crammed full of bands, and it was a big thing my husband and I bonded over when we first become friends in college. One of our first conversations went something like, “Have you listened to Pulp?” “Of course! Different Class was one of the greatest albums of the ’90s.” When we first started dating, he introduced me to The Get Up Kids. Later, I took him to a Decemberists concert after hearing them on WFUV, Fordham University’s amazing radio station, and he was hooked. The only thing I miss about commuting to work is flipping on WFUV each morning to hear their eclectic selection. Of course I can listen online, but a lot of my work day involves making and taking phone calls, which is hard to do with music playing in the background.

While the untimely death of David Bowie this week got me thinking about how important music is to me, I had been meaning to write this post for a while (by the way, one of my knitting friends wrote a nice piece on her recollections of Bowie during her work as a music publicist). Knitting may have surpassed certain bands for what I would call the main “interest” in my life, but there are still ways to combine knitting and music.

A while back, I created a knitting playlist on Spotify. I think it might have been prompted by a conversation started by Ridgely of Astral Bath, who had mentioned something in the Yarn Hoars group on Ravelry about a Rhinebeck playlist. (Incidentally, the Astral Bath Ravelry group has a fantastic music discussion thread.) I dug up every knitting- and yarn-related song I could think of, and also found a band called Yarn, which is actually pretty good, when I searched the music app. Here’s the playlist — it’s a work in progress, so definitely comment on this post with any suggestions. I’ve been meaning to hook up my laptop and play it over the PA system at the Rhinebeck Trunk Show, but kept getting sidetracked. Maybe — especially if I can get more than an hour of music — this will be the year. 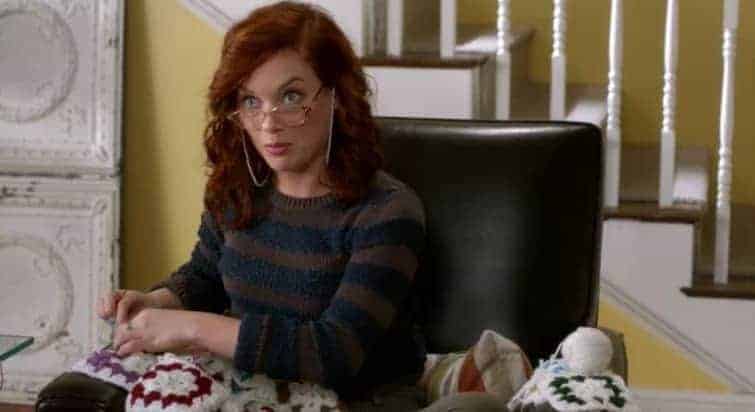 A scene from the recent “knitting” circle episode of ABC’s Suburgatory.

I’ve been a fan of ABC’s Suburgatory since it debuted in 2011. The sitcom is about a single dad (played by Jeremy Sisto — you may remember him as Elton in Clueless) who’s raised his teenage daughter Tessa in Manhattan, but decides to move them to the suburbs to get away from the city’s “bad influences.” It mocks the pampered and self-involved lives of people in the fictional New York town of Chatswin. Tessa (Jane Levy) has an edgy, “indie” sensibility — she loves obscure films, is passionate about certain causes and sees right through everyone’s fake, materialistic personalities.

I was kinda bummed when I heard Thursday night’s episode was going to end up being the series finale, since the show got the axe after only three seasons (I pretty much expected it, though, and reserved most of my disappointment for NBC getting rid of Community). The description of the episode in the onscreen cable guide, “Tessa joins a knitting circle,” did pique my interest. If anyone could make knitting look cool it would be Tessa, I naively thought.

(OK, I’m not sure when the above video was changed from a clip of Suburgatory to a clip from Modern Family… Thanks, ABC.)

What followed was perhaps the worst, most poorly-researched portrayal of knitting in pop culture that I’ve ever seen. It was bad enough that Tessa’s “knitting” circle was a stereotypical group of grey-haired old ladies joking about hip replacements and, um, lack of moisture. But then she started referring to the group as a quilting circle and calling it a “sewing sisterhood” when what they were doing was clearly crochet. At the end of the episode, when Tessa referred to her “crochet needles,” I completely lost it.

I know I shouldn’t expect much from a network sitcom, but when writers on shows like Mad Men do tons of work to make sure that everything is period appropriate (I wrote a story last year about how they went so far as to get photos and scans of a Connecticut phone book from the 1960s to create a prop that was on screen for maybe two seconds) you would hope that a craft that has millions of passionate participants, including many in the coveted 18- to 49-year-old demo, wouldn’t get such a hatchet job.

For a show that got so many aspects of suburban life right, it got knitting — and crafting in general — so wrong.