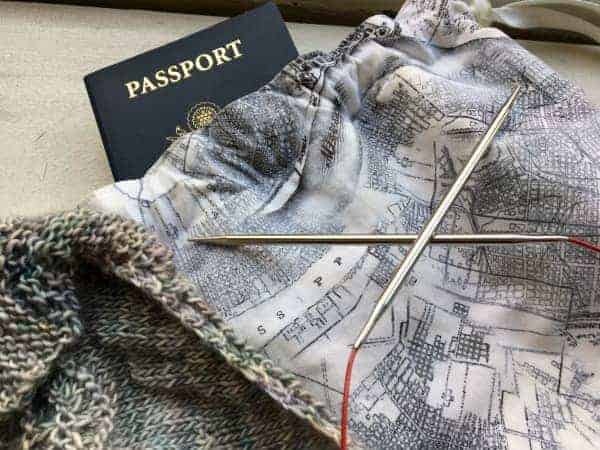 June gave me a bit of a whirlwind travel schedule, between a road trip to Block Island, a bus trip down to Washington, DC, for TNNA, and flight to Colorado to celebrate a milestone family birthday. If those trips had anything in common, it was that my knitting was a constant companion.

Summer travel is an excellent way to make a dent in your WIP pile. Here are some tips I’ve learned along the way:

Yes, you can bring your needles in your carry-on luggage.

At least when flying within, or out of, the U.S. I have even heard of fellow knitters bringing super pointy Signature Needles along on domestic flights. However, different countries have different rules. When I flew home from Australia in 2013, the pair of small, blunt-tipped children’s scissors I bought just to take on the plane, with a blade shorter than 4 inches, and which got through security in New York, were confiscated.

I’ve never had a problem taking my metal ChiaoGoo RED Lace circular needles even on international flights. However, if you’re worried about your pricey Addis or Sigs being confiscated for whatever reason, take some bamboo circulars to be on the safe side. If you’re really worried, I’ve also heard fellow knitters recommend bringing straight needles or interchangeable tips in a pencil case, and a self-addressed stamped envelope to mail back needles if they’re not allowed in your carry-on luggage. Another common tip is to bring a package of dental floss to cut yarn in place of scissors or a thread cutter (which is always prohibited). And, of course, slip a lifeline into those complicated lace projects. And speaking of lace…

When it comes to travel knitting, garter and stockinette are my friends. I’m not sure about you, but there’s nothing like getting frustrated with a pattern when your GPS is acting up in the car, or you’re sitting in a cramped airplane seat next to someone who needs to use the bathroom every 20 minutes and the thimble-sized bag of snack mix just wasn’t enough of a snack and OH MY GOD I AM NOT PAYING $10 FOR CHEESE AND CRACKERS.

I did make an exception to that rule during the trip to Colorado when I started the lace edging of my Flying Fish shawl, but I also made sure to pack my chevron striped scarf, just in case.

You also don’t want a project with a lot of different color changes (think mini skeins) because you will not be happy if one of those roll away, especially on a plane.

Take pictures of your patterns.

I’ve learned the hard way that as much as you think you’ve memorized your pattern, there will be that moment when you need to refer to the PDF and… there’s no cell service or Wi-Fi. When I start a pattern, I make it a habit of taking a screenshot of it on my iPhone (by hitting the home and sleep/power button at the same time) so I can easily refer to it even if I don’t have access to the Internet. Printing the pattern works, too, but getting a screenshot is the best option if you want to go paperless.

I actually sort of look forward to plane rides and long car trips because of the time available to me to knit. Hopefully this will help you prepare for one of your upcoming trips! 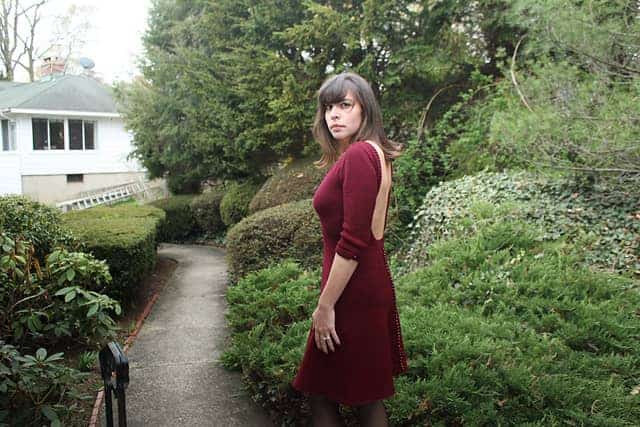 This lack of alternating is not immediately noticeable, but read on.

Ed.’s note: When I knit a garment with hand-dyed yarn, I often waste a lot of time hemming and hawing before ultimately deciding to alternate. The one time I didn’t, with my Urban, it turned out beautifully, but I did consult with Expert Sweater Knitter Yelena Dasher before making that decision. So, I decided to again turn to Yelena, this time asking her to share some advice on when to alternate. Turns out, she has some experience to back up her advice. I think even her sweater “disasters” still look pretty awesome, but if you’re going to play with hand-dyed fire, you should definitely read this first.

Nothing is as decadent as laziness. Think about it: lying on the beach with a stack of guilty pleasure magazines or books, leaving the dishes until the next morning to enjoy another glass of wine and something on TV, not alternating your hand-dyed yarn because how bad could it be…?

Wait. One of these things is not like the other. Crusty dishes? Meh. Slight sunburn and a suspicion that you need $1,000 worth of new, must-have makeup and skincare products because the article said so? You’ll likely come to your senses before you remember your credit card number. But failure to alternate will likely leave you with a garment you won’t frog, but won’t wear. Because, holy wow, the sleeves really are a different color from the body and yes, everyone can tell that you changed skeins right where your hips start.

But do I always practice what I preach? Obviously not or this would be an incredibly boring, preachy post. I have selected some of my favorite cock-ups for your amusement and, I hope, edification. 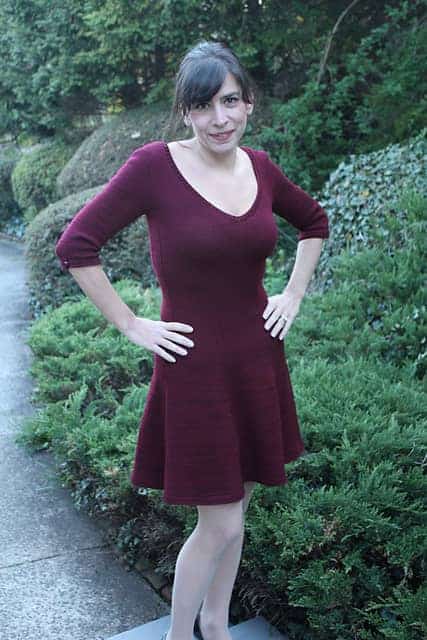 Exhibit A: Trapzius. From far away we do not have a problem. Truly we don’t. I would argue that up close, while there is a problem, it is a manageable one and does not distract from my enjoyment of this dress. I had two skeins that had been purchased together and the third I got from a destash. In the hanks, they did look different, but not hugely different. However, once fully into the bodice, having not alternated, I wound the other two skeins and realized the outlier was an outlier. OK, I wasn’t going to start from scratch, so when the first skein was exhausted, I alternated with the other two for the rest of the body and sleeves. And if you zoom in on the photos you can see there is a more variegated vibe to the body from my hip bones down and the sleeves from the underarms down. End of the world? No. Should I have been better about alternating the outlier skein from the beginning? Yup.

Exhibit B: In The Red. This is another example of shoulda, woulda, but hey it’s not so bad. Even a cursory look at this sweater will reveal that I didn’t alternate. That’s why there’s both pooling and a much lighter shade of wine running through my midsection. The difference is that I bought this lot of yarn at the same time proving that there are no guarantees in the hand-dyed world. Whether vagaries of the dye job, or accidental combining of different “lots” (and I’ve put lots in quotation marks because I know hand-dyers don’t have traditional lots, but I trust you all know what I mean), there is a strong chance that your skeins will not be uniform even if you bought them at the same time from the same place. 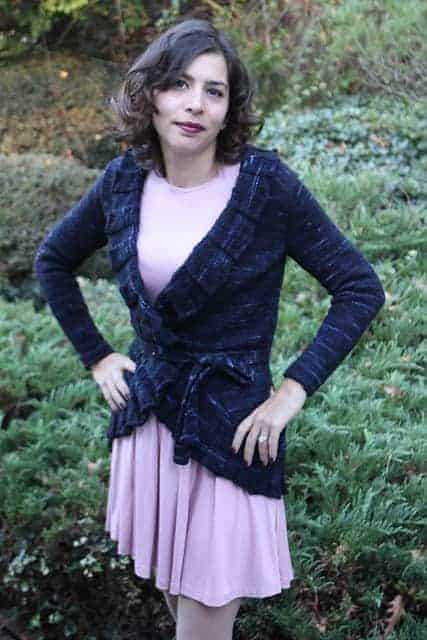 Exhibit C: Agrippina. Now we’re cooking with gas — Terrible mismatched gas. The thing is, I DID alternate on this one. Sort of. I had gotten four skeins beautifully matched in a destash and then ordered two more from the website. I begged for super dark skeins so that they’d match what I already had, but what arrived was… well… less dark. Fine, I thought, this thing has a belt and a big ruffle, I’ll use the lighter stuff there since I definitely don’t want light bits running through the entire sweater. This is, by the way, another tactic. I don’t swear by it, but other people do, and it is true that some stitch patterns obscure a mismatched skein better than others. But in my case, nothing was going to save this. I should have given up. But instead I knit an entire sweater with that huge ruffle. And where is that sweater now? Destashed. Someone else didn’t mind what drove me nuts. So that was a lucky break. Next time, I’ll just find a different project for the four matching skeins.

Exhibit D: The Boots Required It. I’m guessing I don’t have to point anything out to you on this dress. The good news is, I have a partial skein that is more like the rest of the dress so I can rip out the silly areas and repair. The bad news is I made this dress two years ago and haven’t gotten around to fixing it…

Have I had lucky breaks where I haven’t alternated and everything has turned out peachy? Absolutely. But I enter into those arrangements knowing full well it is likely to bite me in the butt down the road. I have found that if I wind all the skeins I plan on using first, I can get a better idea of what they look like (or conversely, merely unwinding the hanks and looking at them next to one another can show if variances in color are uniform skein to skein, or if one skein is completely not like the others), and that some dyers are more likely to have consistency in a single order (the two skeins I had bought for the burgundy dress would have been 100% fine without alternating, it was the third skein from a wholly different update that required me to alternate), but if want to be assured that my project will be uniform in colors throughout, I suck it up and alternate.

So please, I implore you, think long and hard before you choose not to alternate with hand-dyed yarns. Sometimes the fates will be kind to you, but sometimes they will be very very, very unkind — and usually when you are so far along in your project that you’d rather bin it than start over (or at least that’s how it goes for me). And if you happen to see me wearing the navy dress and it still looks like this, remind me to fix it as soon as I go home.

If you want to ogle even more of Yelena’s fabulous sweaters, please go her knitting/fashion blog, Le Pull Juste.

What’s your philosophy an alternating skeins? Share in the comments.