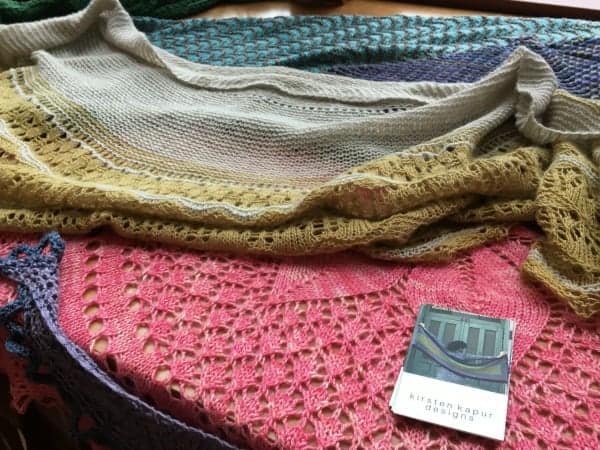 Kirsten Kapur is one of those designers who consistently impresses me. I marvel at her use of texture and color, particularly her color combinations. While I’ve knit only three of her more than 250 simple and elegant patterns, I have several more in my favorites. So, when I heard that Kirsten, a fellow New Yorker, had been invited by Paola Vanzo, the owner of mYak, to give a talk on her design inspirations over tea and knitting in the West Village, I RSVPd faster than you could say yarn.

The event took place in the library of the Trace Foundation, a nonprofit that promotes Tibetan culture where Paola is managing director, and which houses an appointment-only pop-up shop for her yarn line. It was through her work in Tibet that Paola came to create mYak in 2011, working with a cooperative of nomads from the Tibetan Plateau to harvest and mill the super soft, Cashmere-like yarn from the underbelly of the baby yaks that they herd. It’s a story that deserves its own blog post.

Kirsten recently collaborated with Paola on two designs using mYak yarn: The Wave Hill brioche cowl, named for the estate and public gardens in Riverdale in the Bronx, and a lacy two-color shawl called Acorns and Arches, crafted with colors created using a natural mushroom dye. The two patterns set the scene for Kirsten’s inspirations, essentially knitted interpretations of the natural world. 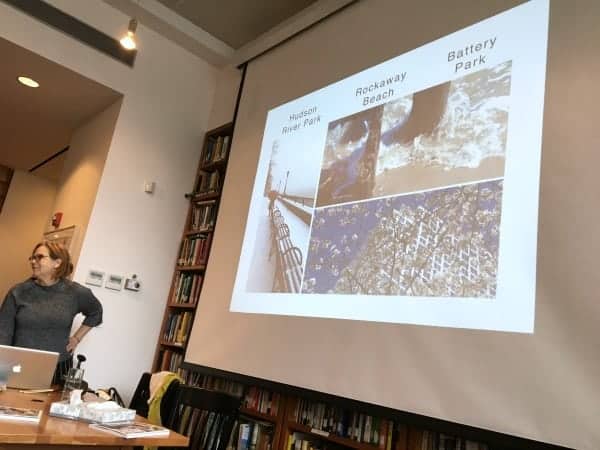 Before becoming a knitting pattern designer a decade ago, Kirsten worked as an apparel and textile designer in the garment industry in New York City, where she also lives. While the city may not seem like an immediately obvious place to get natural inspiration, there’s plenty.

“In this city we have some pretty amazing places we can go,” Kirsten said. “We have some fabulous parks, like the New York Botanical Garden, Central Park. I go to these places and find inspiration for color, texture, obviously the shapes of the plants.”

She also uses the Brooklyn Botanic Garden (near me!), Hudson River Park, Rockaway Beach in Queens — particularly in winter — and the aforementioned Wave Hill. After taking photos, Kirsten returns home and starts playing around with the yarn in her healthy stash, drawing on the colors from her images of flowers and leaves, water and animals — even seaweed. 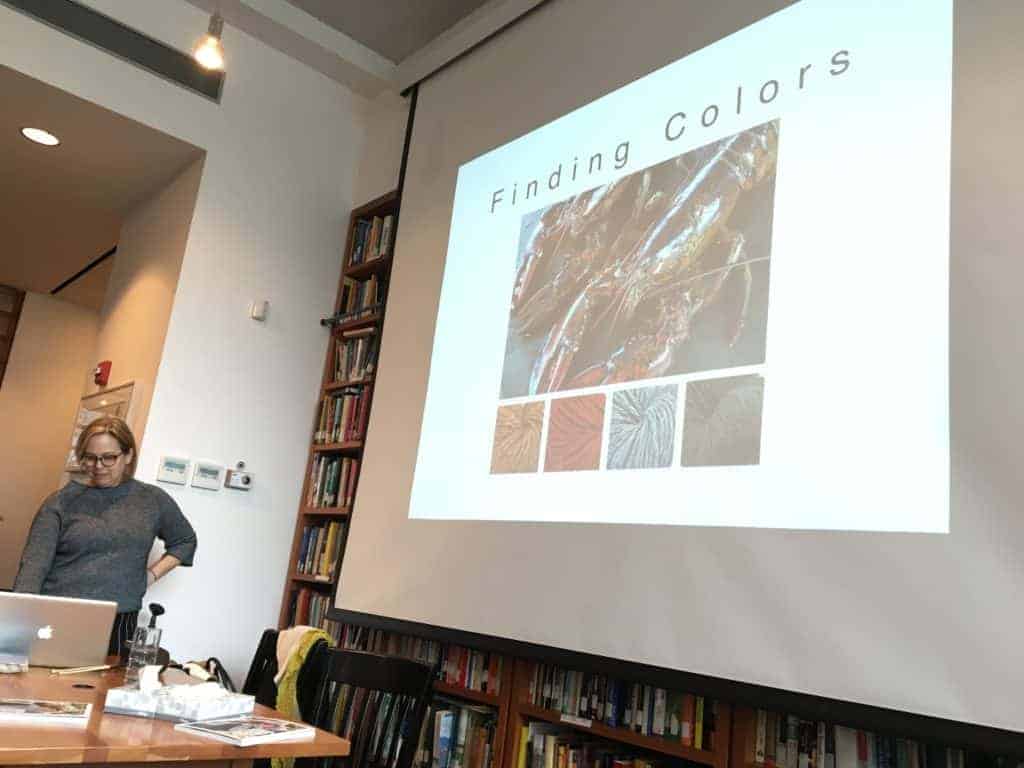 Kirsten then pores over stitch dictionaries and then plays around with charting software, making the patterns work for the look she’s trying to achieve. A lot of her design work also happens once the yarn gets on the needles, with changes made when stitch patterns aren’t working. 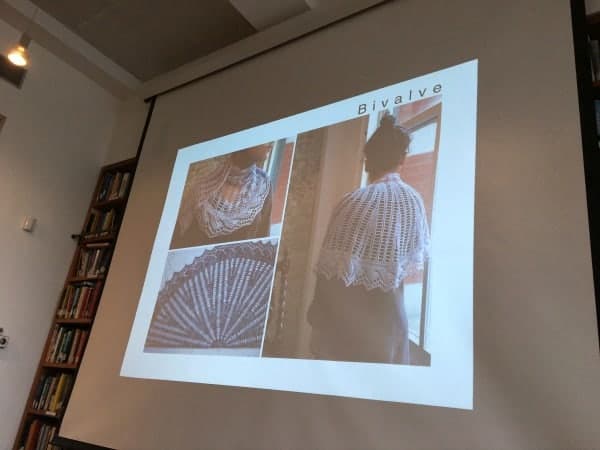 While some of Kirsten’s design names are obvious, many are particularly clever. Her Reynard Socks, for example, are named for the fox character in fables, and feature a fox-like lace pattern when viewed upside down. Cladonia, one of Kirsten’s best-known patterns, is named for the lichen on a rock she photographed it on.

The photographs are also what draws me to Kirsten’s patterns, and she recounted what it took to capture this view of A View From the Hill, on Rockaway Beach on a freezing, windy January afternoon. 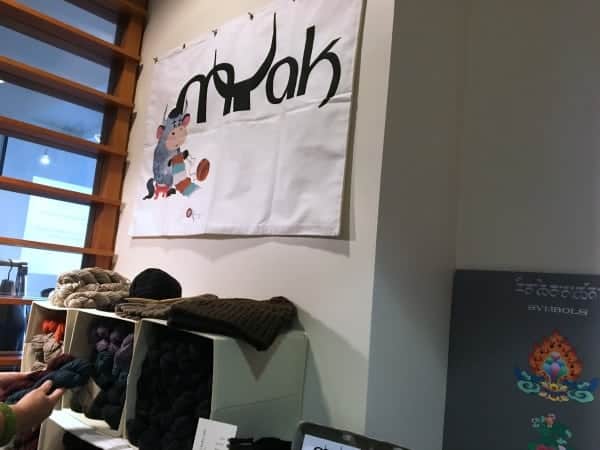 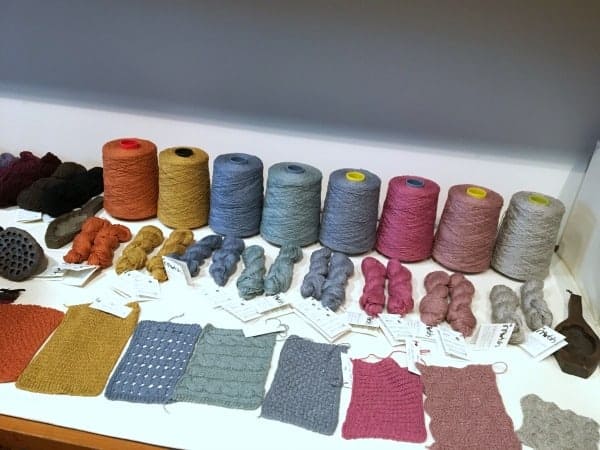 After Kirsten’s talk, and after we finished up our tea and pastries, there was also the opportunity to shop the mYak pop-up, which had such a beautiful display. 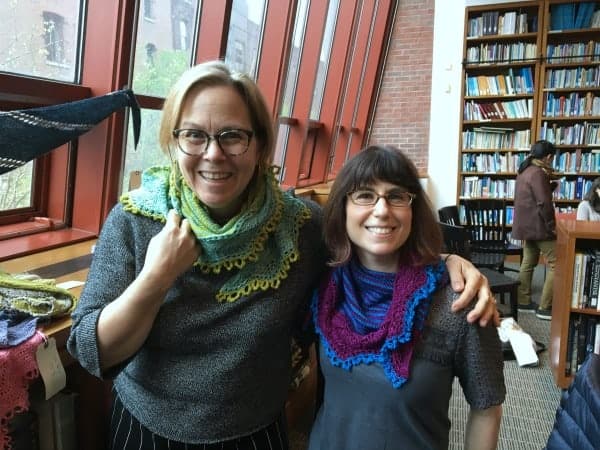 Of course I wore my own Cladonia to the event and Kirsten was nice enough to pose for a photo with me while wearing the sample!