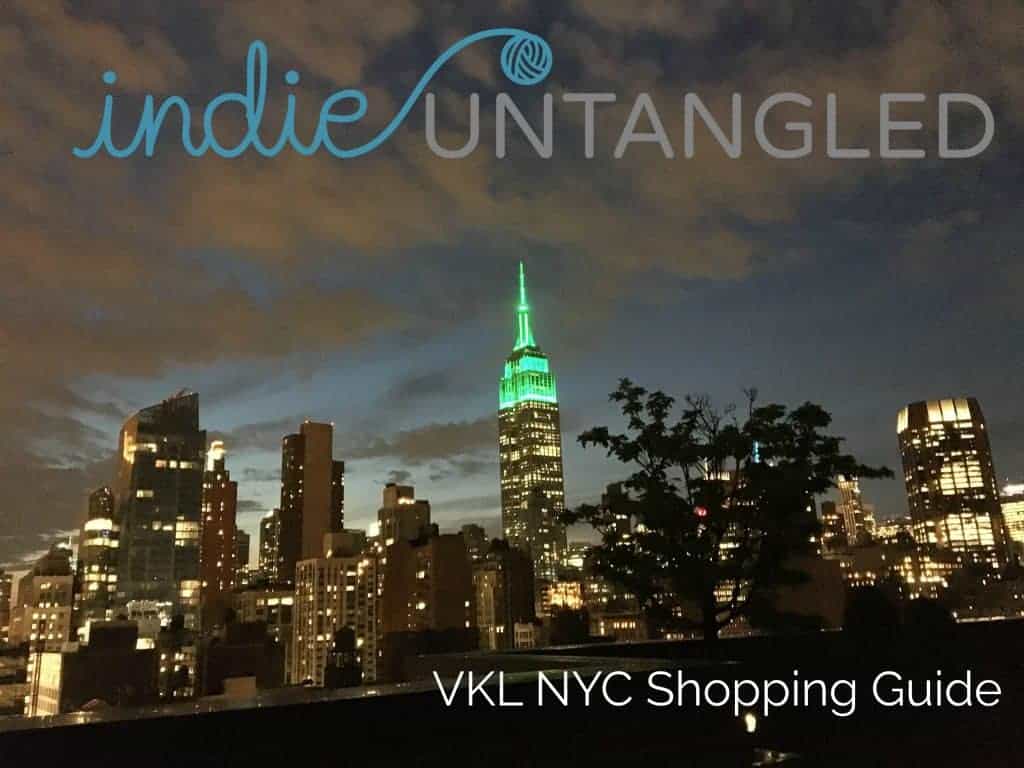 I’ve been attending Vogue Knitting Live in NYC regularly for the last several years, and each year I’ve seen more and more indie dyers and makers in the marketplace. VKL NYC 2018 is shaping up to be one of the indie-est years in recent memory, with a huge selection of dyers and makers, many of them local, scattered over the two floors at the Marriott Marquis in Times Square from January 12-14.

To help prepare you for what I know will be a whirlwind weekend, I decided to create a special shopping guide to some of the Indie Untangled vendors at the show, with a sneak peek at the yarns and products they’ll be bringing.

I’ll be around all three days, taking classes with Melanie Berg, Clara Parkes, and Andrea Mowry, and doing some damage in the marketplace. If you see me, definitely come by and say Hi! 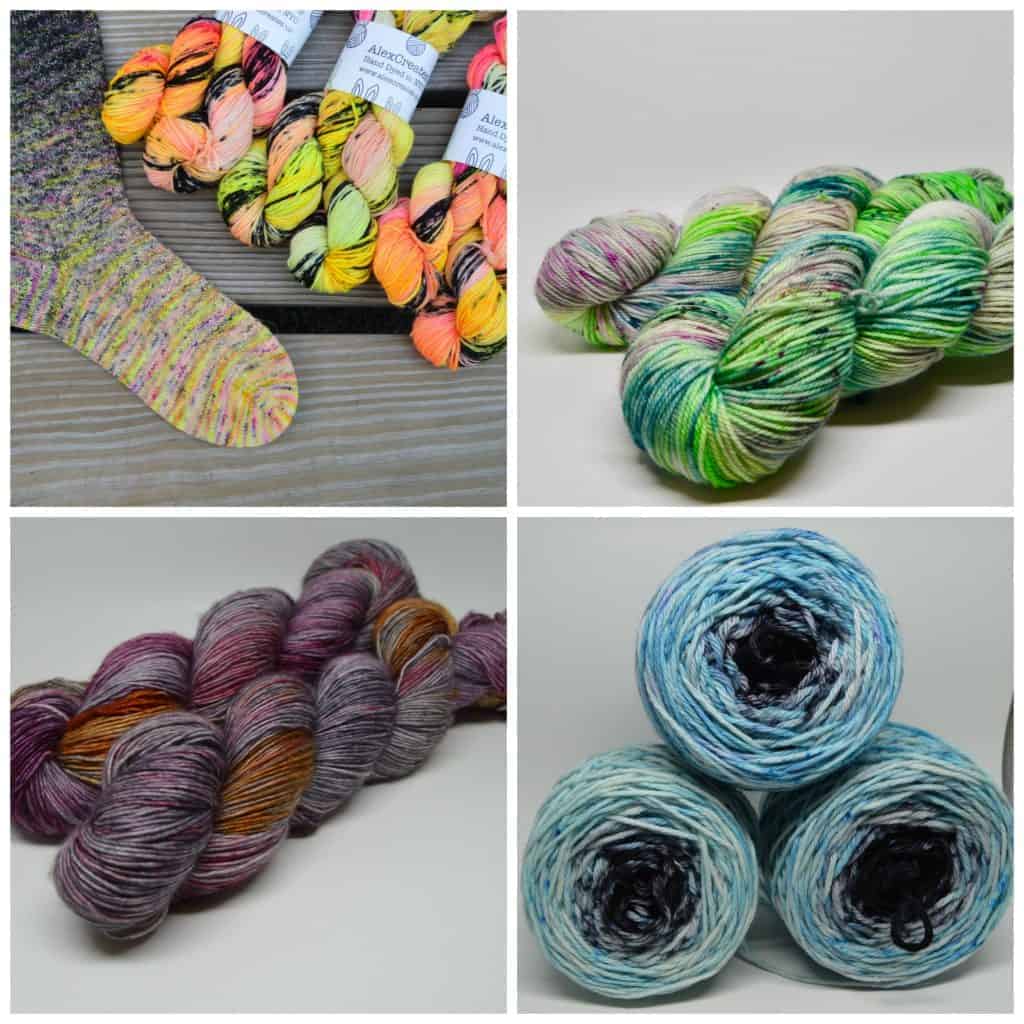 Alex is a NYC native, born and raised in Harlem. He taught himself to crochet at age 13 and opened his Etsy shop in 2011, and is known for his candy-colored gradient yarn.

Pictured clockwise from the top left are Ombre Sock yarn in Strawberry Lemonade, MCN in Disco Heaven, Ombre Targhee in Blue Bombsicle, and Single Ply Merino in Pennies from Heaven. 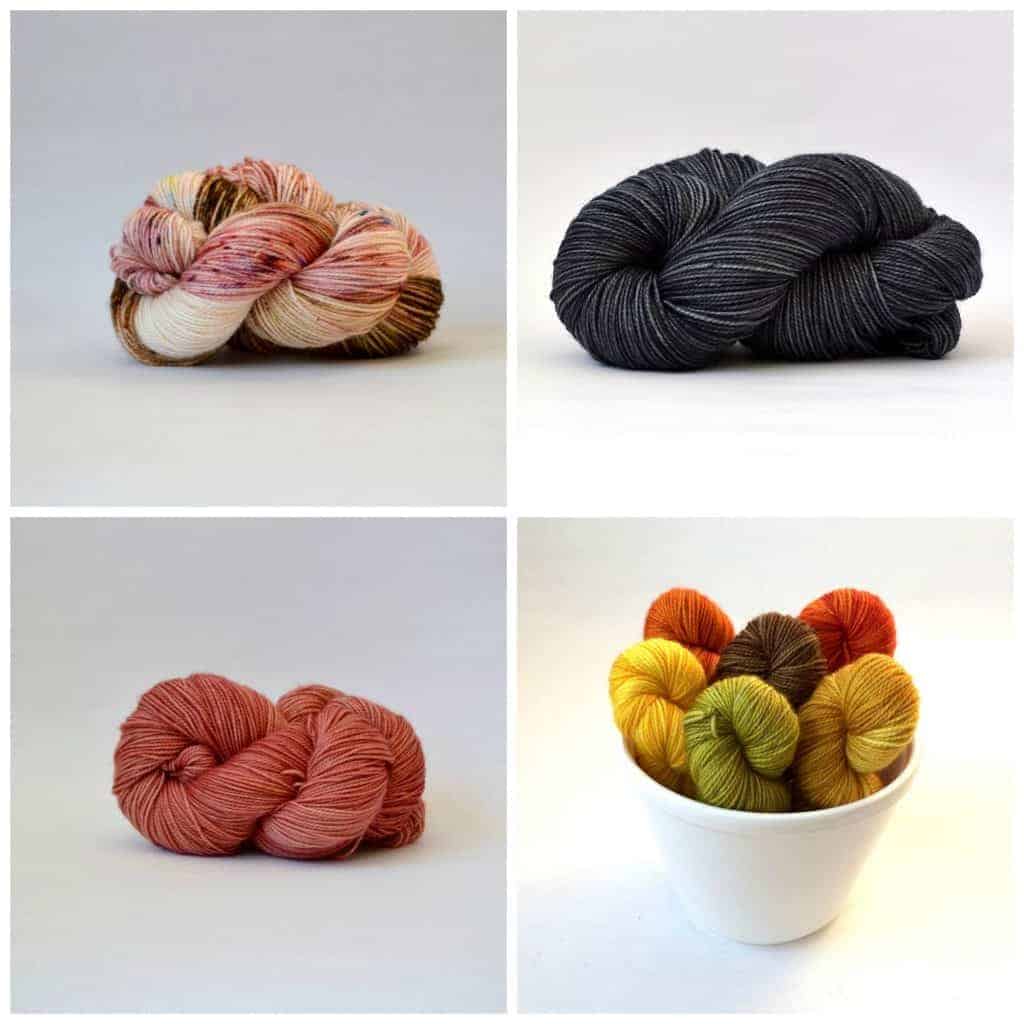 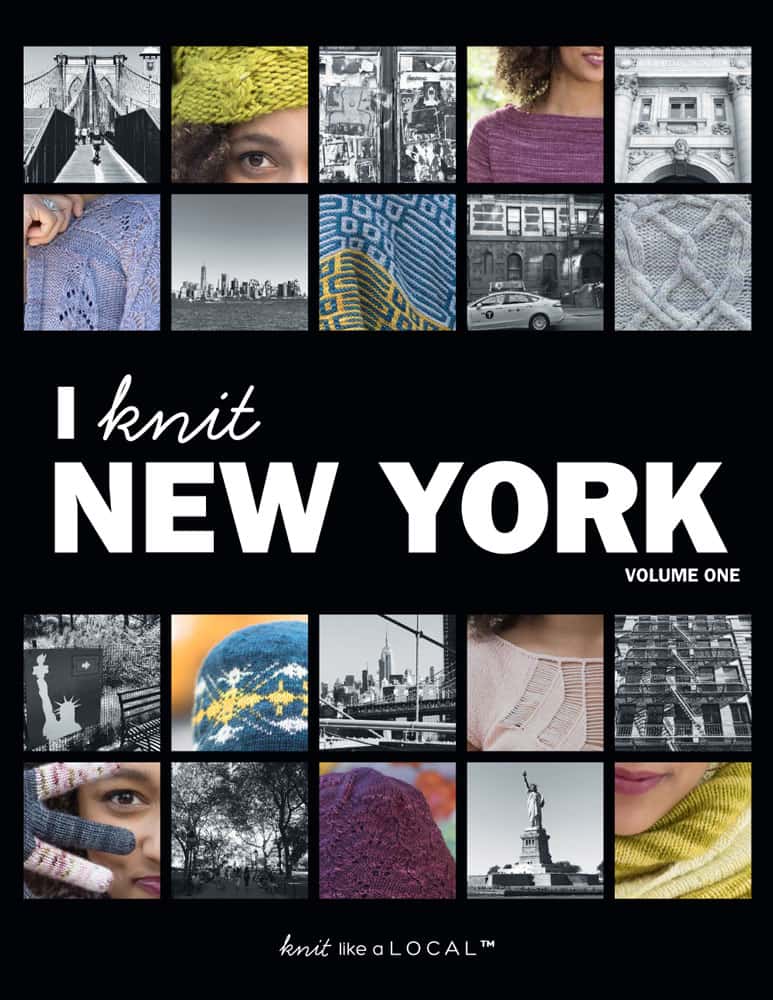 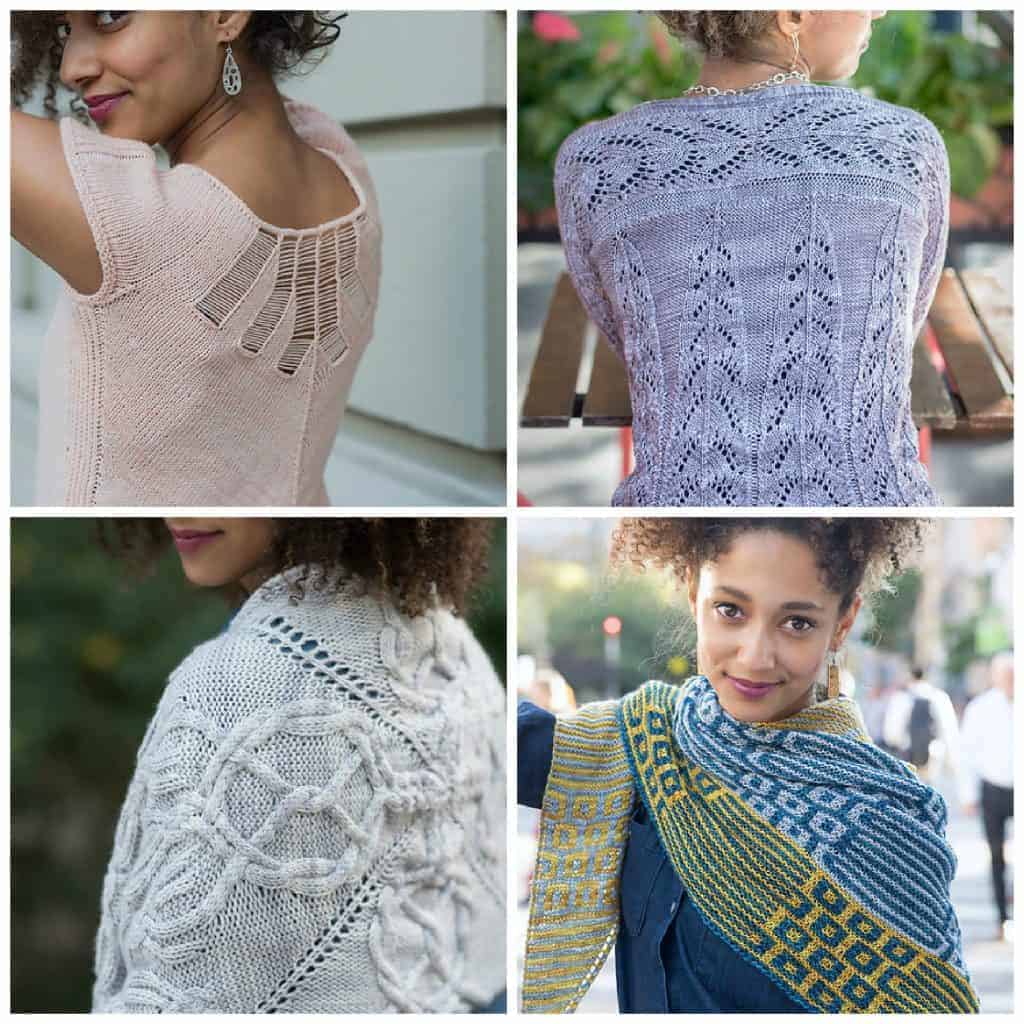 Alice, who is based in Maryland, is not only bringing her popular semisolid and speckled colorways, but is debuting the first installment of the Knit Like a Local series she has collaborated on with designer Kathleen Dames. I Knit NY includes 10 patterns by a team of local designers — including Brittney Bailey, Kirsten Kapur, Xandy Peters, and Lars Rains, along with Kathleen — inspired by New York City landmarks like Rockefeller Center and the clock at Grand Central Terminal, all made with Alice’s yarn. The book also includes a yarn store guide written by yours truly and an essay by Kay Gardiner of Mason Dixon Knitting. 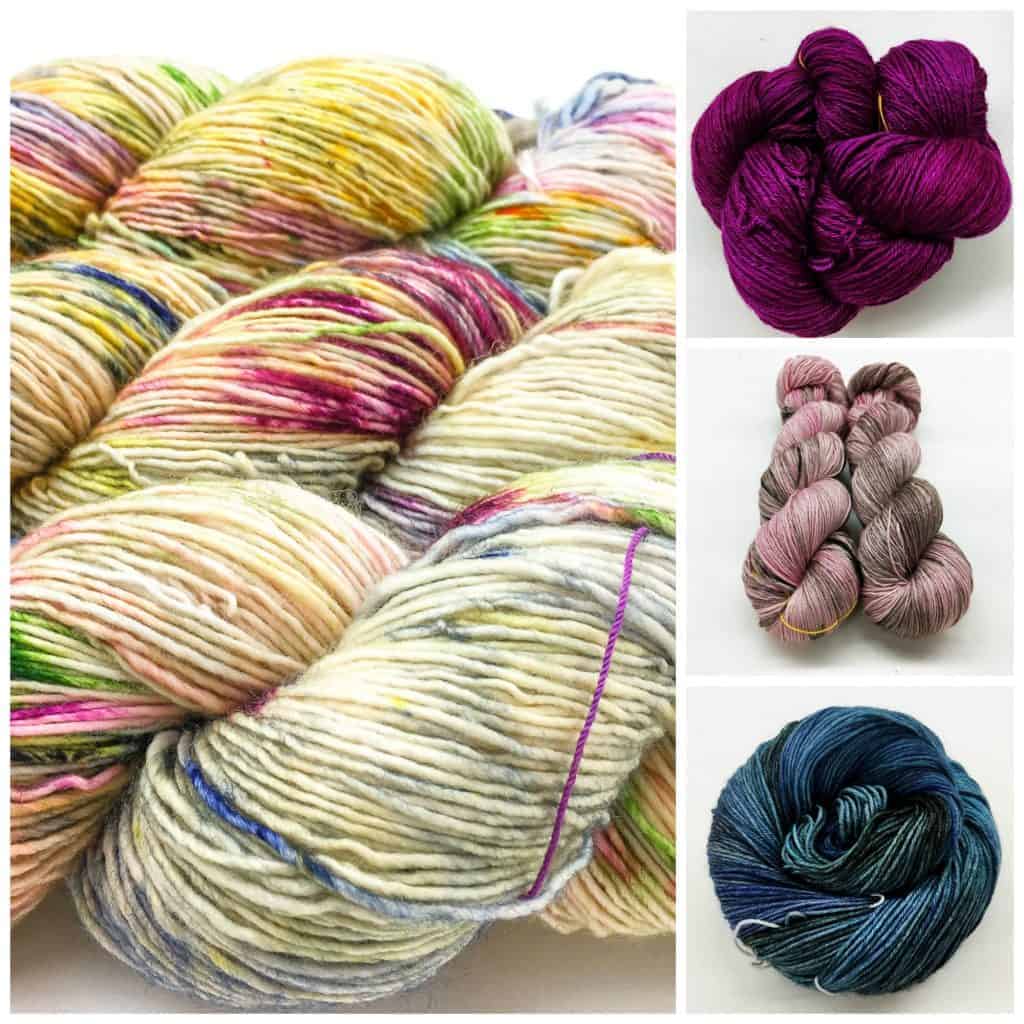 Also from Maryland, Kate and her crew are VKL veterans, and always bring a huge selection of colorful yarns to their massive booth.

Pictured above is their exclusive VKL colorway, Twilight Skate, along with, from top to bottom, the colorways Jocelyn, Springtime In Washington, and Denaili. 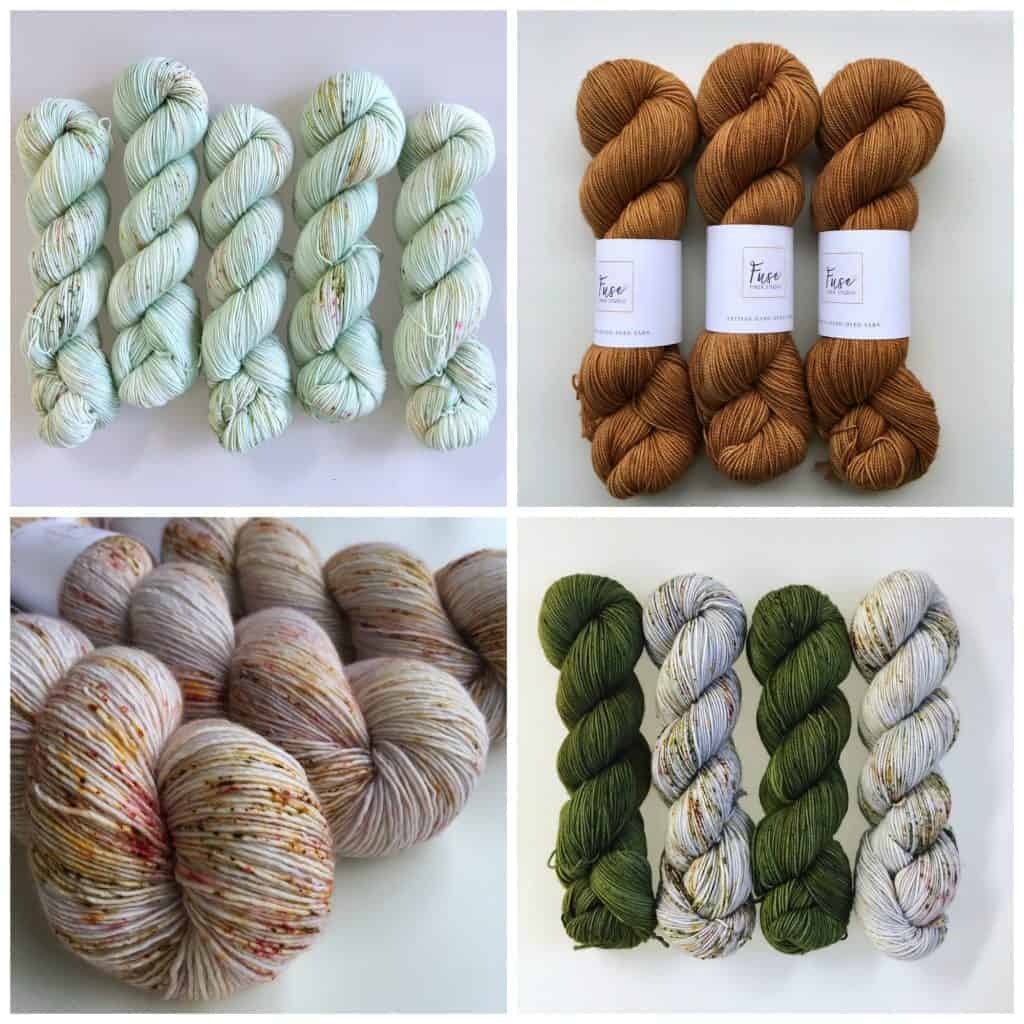 Rebecca launched her business after taking a dyeing class with Felcia Lo at last year’s VKL. This fast learner creates gorgeous colorways from a studio in northern Connecticut, housed in a factory that once manufactured safety fuses for mining. 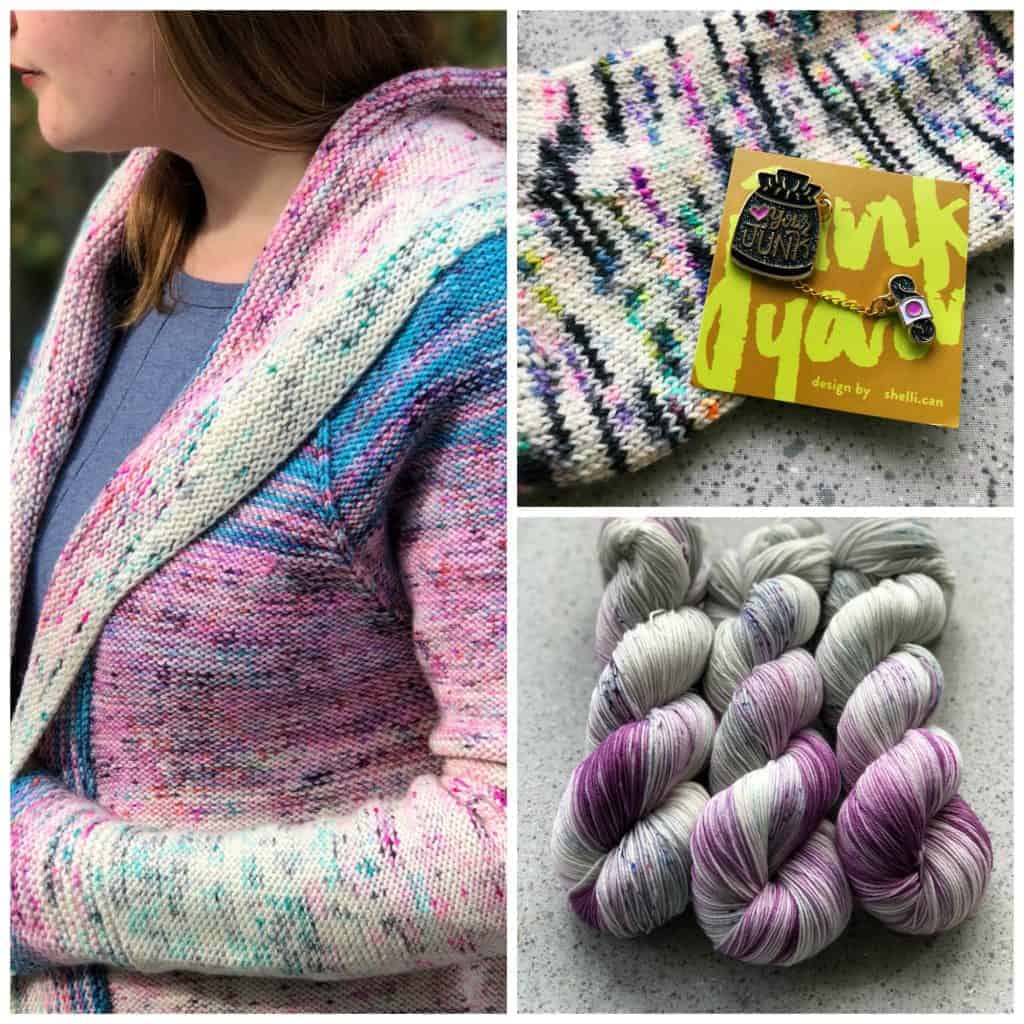 Kemper’s hand-dyed yarns are inspired by inspiring women, from actresses to activists.

Pictured above is Andrea Mowry’s Comfort Fade knit with Junkyarn DK (100% Superwash Merino) in the colorways Fleur, Lara, Dolly, and Diana. The top photo is of Holly Golightly, a VKL 2018 exclusive, and below that is the colorway Amilyn. 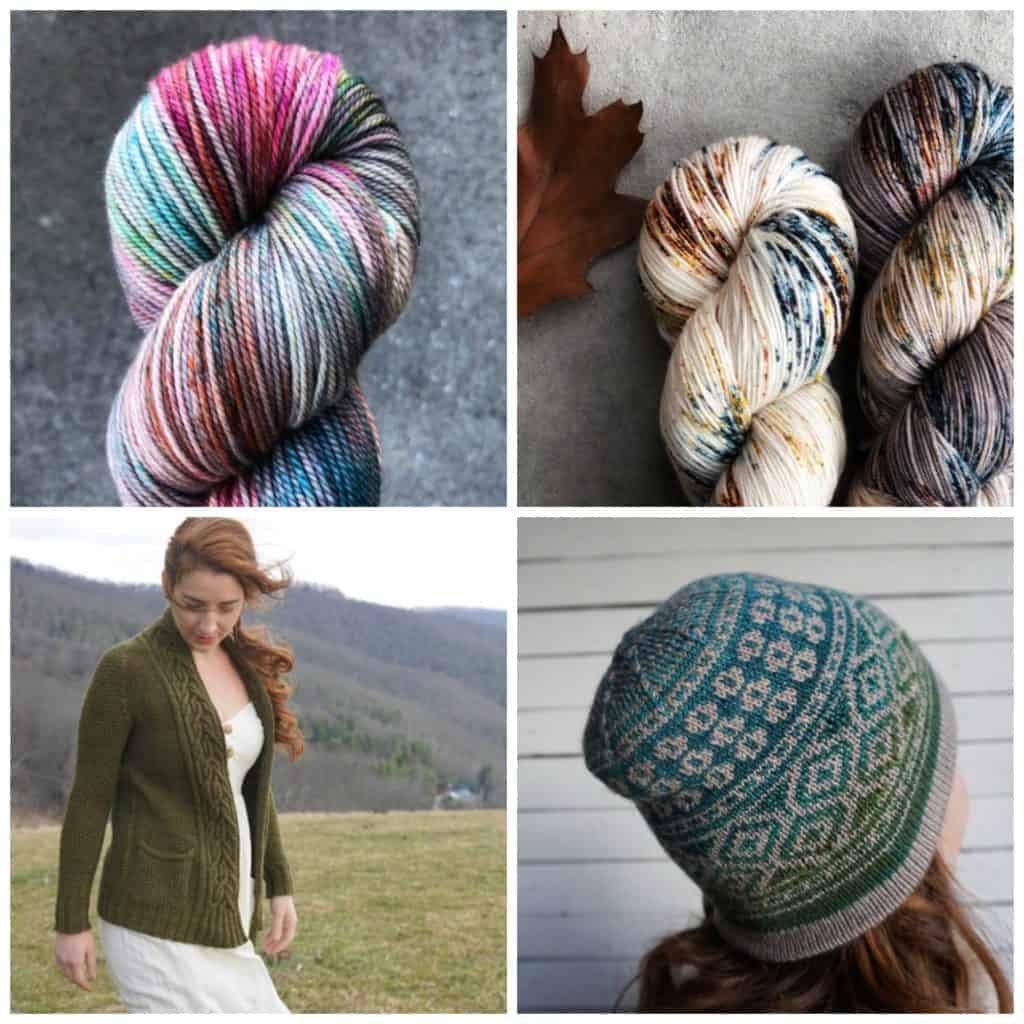 Not only does Dami, another dyer from Maryland, create lovely colorways, but she also collaborates with other popular yarn companies, including Spincycle Yarns from Washington State.

Pictured clockwise from the top left is 5 Pointz in Swanky DK, Paris Train and London Rain in Swanky Sock, the Stoirm cap in Swanky Sock Castaway and Spincycle Dyed in the Wool Family Jewels, and the Gailleann sweater in Domestic Worsted. Christina Danaee will be debuting both designs in the Magpie booth. 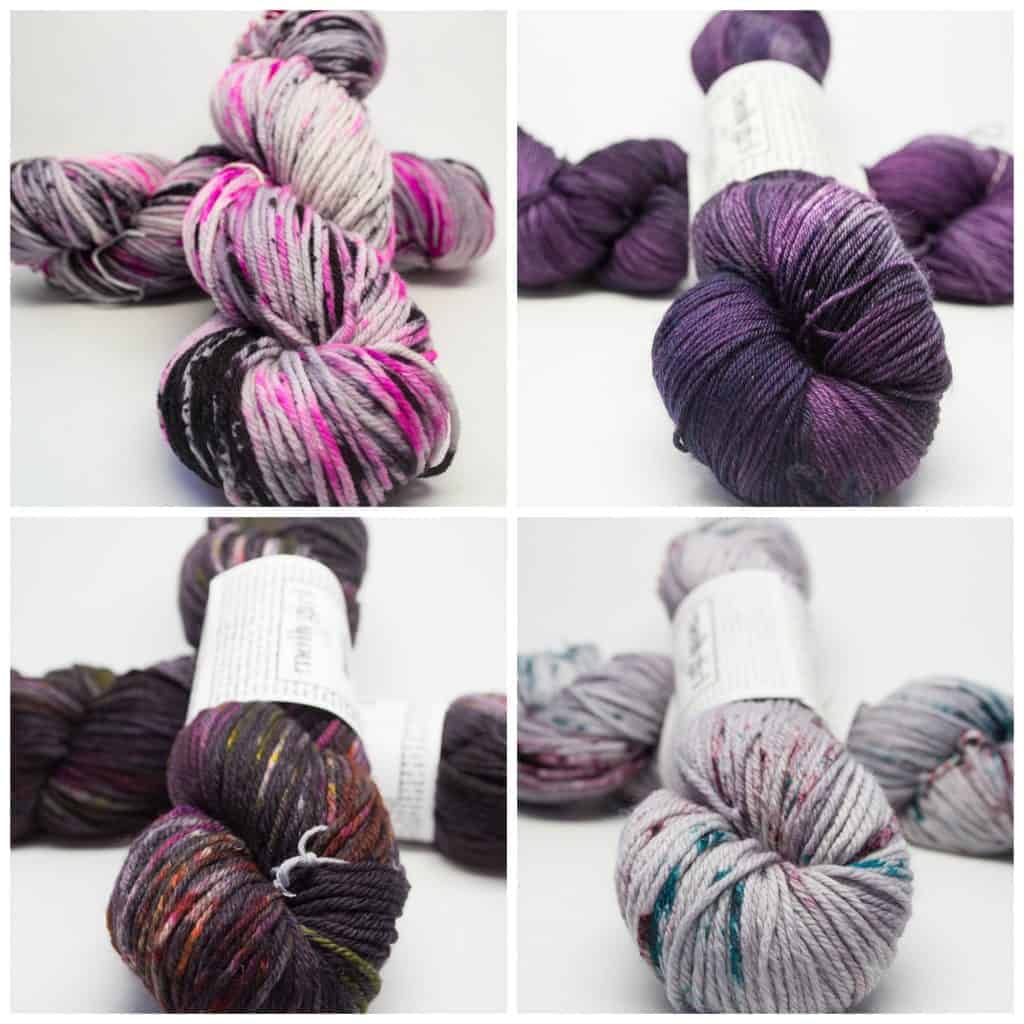 Based in New Jersey, Angela offers both colors and bases that take cues from pop and rock music.

Pictured clockwise from top left are Walk This Way, Rolling in the Deep, A Thousand Years, and Electric Love.

One Geek to Craft Them All 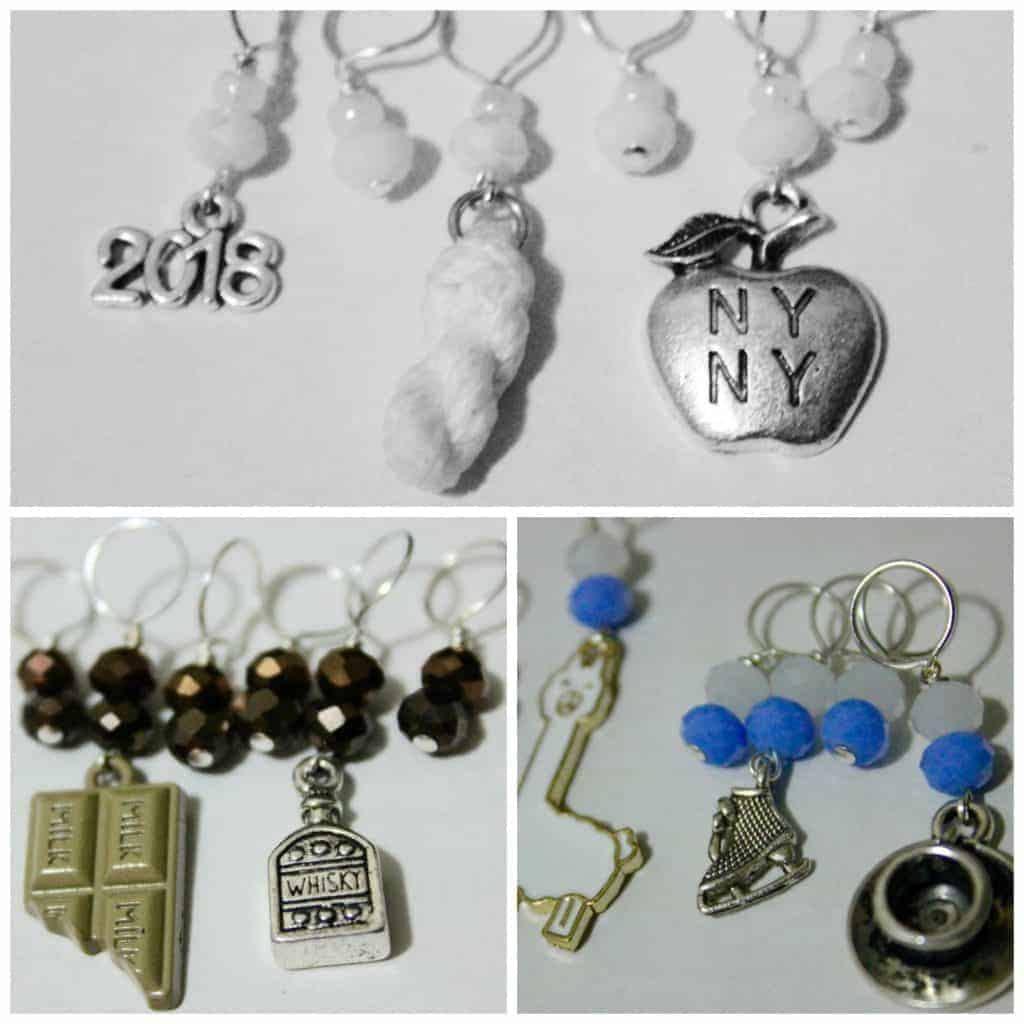 Marsha, who lives just a few blocks away from me in Brooklyn, crafts fun stitch markers with a geeky, pop culture spin (think Dr. Who and Harry Potter).

The above sets, which include a VKL exclusive, are just a small sampling of what she’ll be bringing. Marsha is sharing a booth with one of my favorite NYC LYSes, Woolyn, which will have store exclusive colorways from Asylum Fibers, MollyGirl and more. 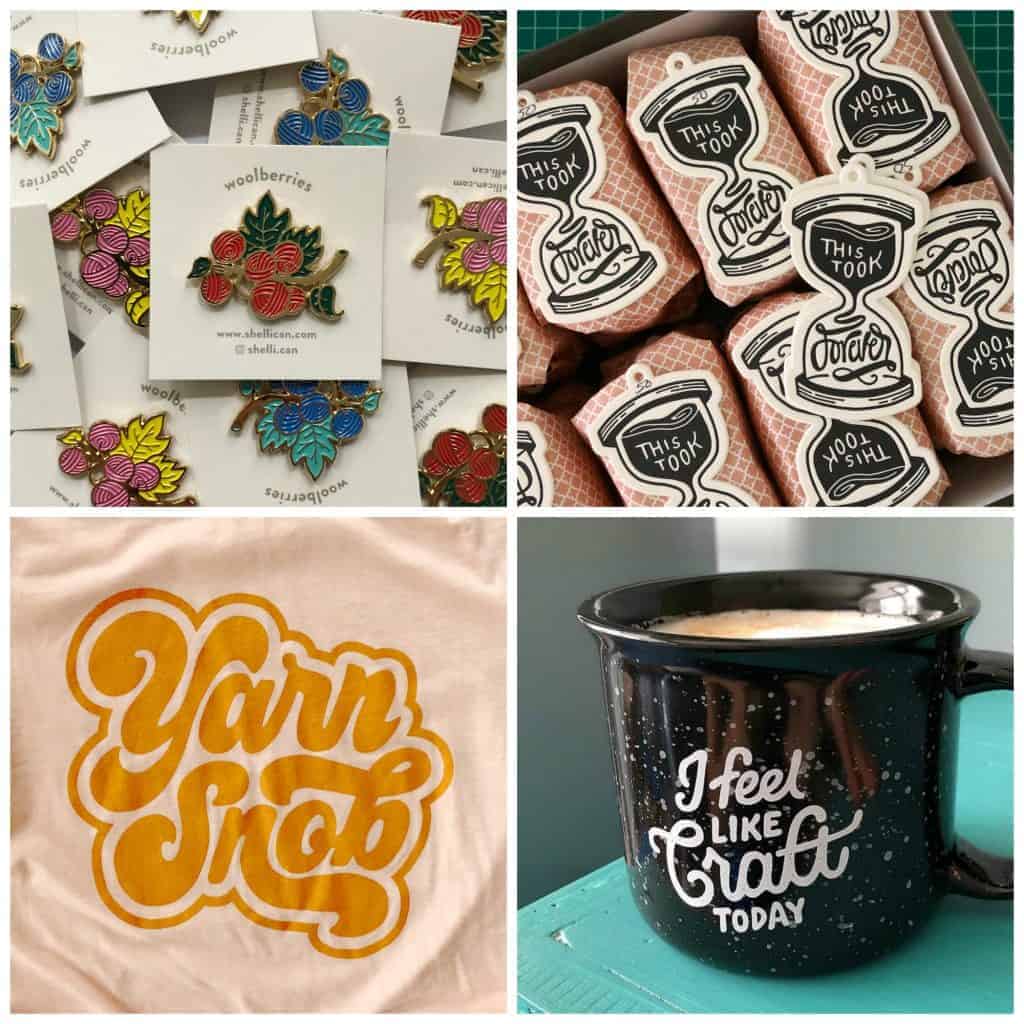 If you collect (or want to start to collect) knitting-related enamel pins, you need at least one from Shelli. Based in Alexandria, Virginia, Shelli also designs creative knitting-related accessories, like the gift tags, mug and t-shirt pictured above (I’ve already claimed a shirt in XS!). 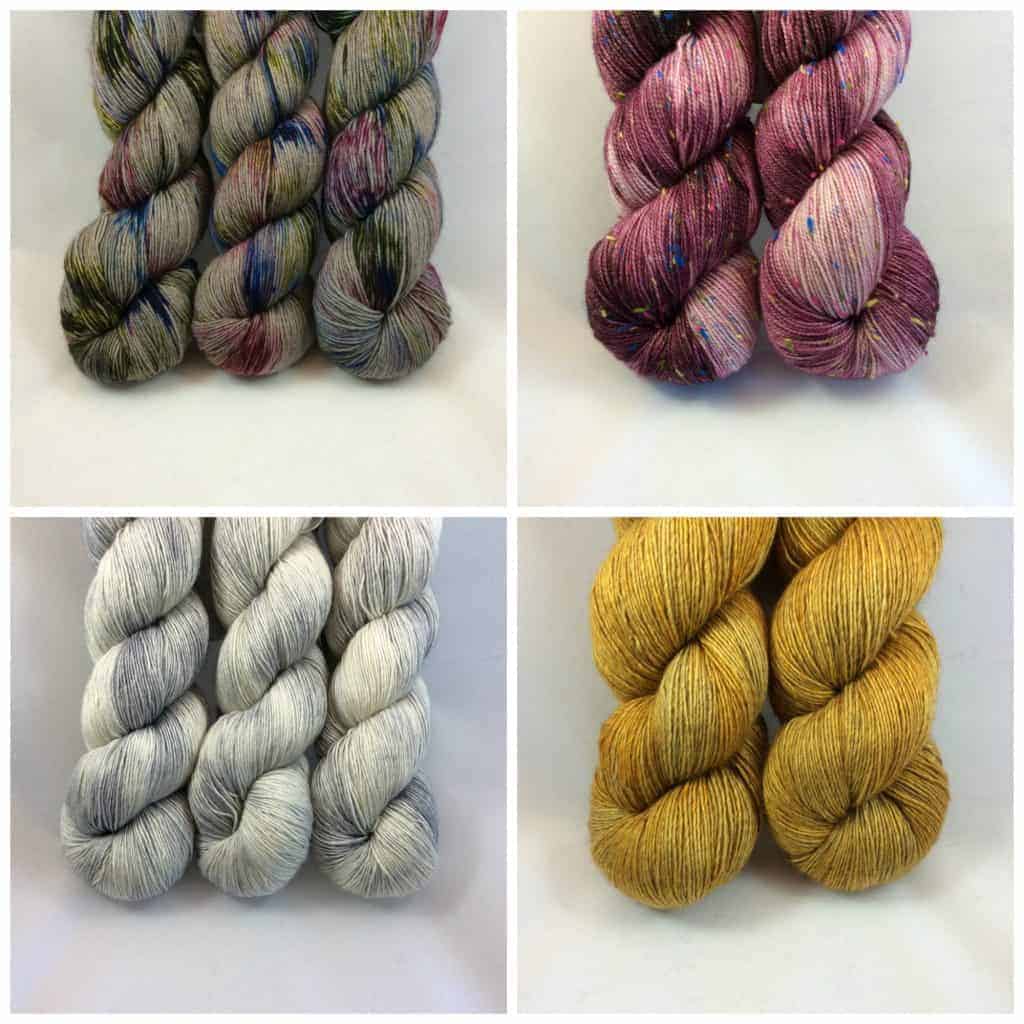 3 thoughts on “Your indie shopping guide to VKL NYC 2018”