Etsy doesn’t have much in common with China-based online marketplace Alibaba. Except that it does, with more and more mass-produced goods competing with products that are legitimately handmade. But you wouldn’t know it from this Fast Company feature on Etsy seller Alicia Shaffer of Three Bird Nest, who apparently makes $1 million a year selling knit socks and scarves.

Looking at the former, extremely click bait-y headline, I shouldn’t have been surprised by the story.

Knitting socks, scarves, and headbands doesn’t have much in common with performing orthopedic surgery or governing a country. But this crafty hobby earns mother-of-three Alicia Shaffer’s business $80,000 a month, in part via her Etsy shop—which adds up to an annual revenue of $960,000, she claims. That’s about as much as top orthopedic surgeons make, and more than twice as much as the United States president makes.

I’m not going to even get into a business magazine comparing annual gross revenue to a yearly salary. But, the writer somehow decided to paint the picture of a woman churning out lacy scarves and cabled boot toppers, and making big profits, and then buried this little nugget:

Not all the items are entirely handmade by Shaffer’s team—many, like the knitted legwarmers, socks, and gloves, are sourced wholesale from India. “We finish them here, adding lace trimmings and buttons,” Shaffer says. The profit margin from such imported items is 65%. 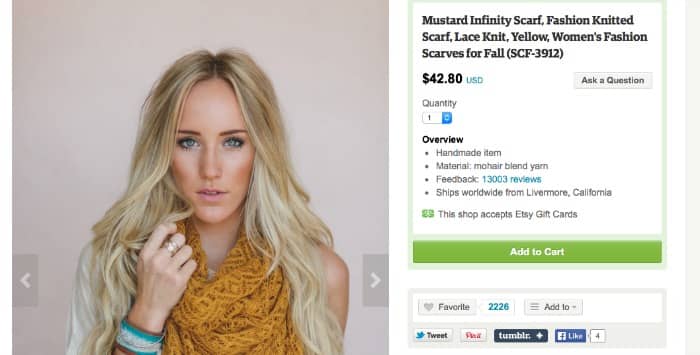 This has been the problem with Etsy since even before they decided to relax their rules on what’s considered handmade. People who actually produce things themselves — including dozens who are on the Indie Untangled Marketplace — are increasingly crowded out by sellers who buy items wholesale and pass them off as artisan made. Even if Shaffer was purchasing 100+ pairs of socks that were actually handknit in India, which could be possible, or was selling her own machine-knit designs, why isn’t she explicitly mentioning that in her listings? Obviously there’s a certain cache to being on Etsy, or else she would have completely decamped to her own website ages ago. And, another big question — is she really paying Etsy $35,000 a year in commission?

I really wish the writer of the Fast Company story had delved into this, instead of propagating a myth about making thousands of dollars selling hand knits (I could only imagine what the writer of the Yahoo story about insulting knitters would have to say about this). There’s also a ton of pretty good advice for selling on Etsy — which would probably come in handy if people actually selling what they knit didn’t have to compete against shops like Three Bird Nest.

Update on 8/26/15: I learned this morning via this blog post that Three Bird Nest was “taking a break” from Etsy, but it looks like, based on a press release, that the company has decided to leave for good:

The choice to leave Etsy’s marketplace wasn’t made lightly and took the company over a year to decide. “We want to focus on Three Bird Nest’s website growth and potentially explore other marketplaces that fit more in line with our core values as a company,” Shaffer continued, “Additionally one of our goals has always been to provide affordable bohemian fashion clothing and accessories to our customers which we now can realize by selling independantly.”

There’s so much to mull over about the changing face of handmade businesses and marketplaces. I’ve been thinking a lot about the upcoming launch of Amazon Handmade (could that be the marketplace that Alicia’s referring to?) and how that might impact the landscape. But instead of reading my musings, I encourage you to head over to While She Naps, where blogger and podcaster Abby Glassenberg is preparing for an interview with two Etsy executives. She’s looking for some input, and I’m sure she’ll get it!

198 thoughts on “Make $1M a year selling your ‘knitting,’ or How to be a successful Etsy importer”