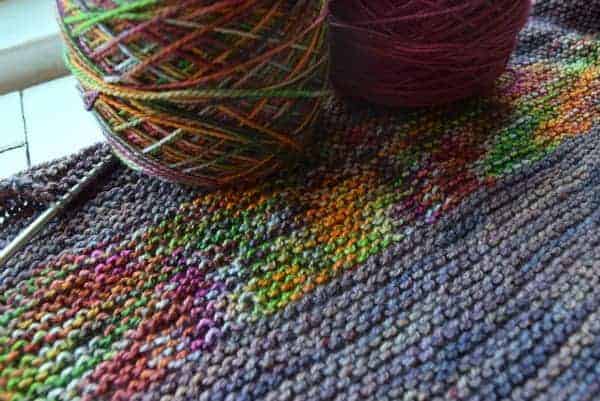 The start of my MKAL shawl with designer Casapinka.

This past weekend, as most of you know, the East Coast got hit with a monster blizzard that sent people lining up outside of grocery stores beforehand and clearing the shelves of bread (well, except for the seven grain baguette, which at least let me feel somewhat virtuous outside of the polenta, mushroom linguine and onion soup I cooked as my husband and I took refuge in our apartment). It was the ideal knitting situation, and I indulged, settling in on the couch to finish Season 2 of Gilmore Girls on Netflix.

I also got swept up in the fun of Casapinka’s mystery KAL, Welcome Back Garter, which kicked off last Thursday night. I’ve never done a MKAL before, but as I trust Bronwyn’s taste and wish I could knit pretty much all of her patterns, I decided to jump in. (It’s not too late if you want to participate!)

The shawl calls for three skeins in three different colors, with a suggestion to include one variegated colorway. I raided my stash and dug up some sock yarn from Tanis Fiber Arts that my mom brought back from Nova Scotia a few years ago in colors that I had requested. The yarn didn’t have a specific project attached, but I figured it could be called on if I needed a baby gift or finally started knitting socks. I then pulled out a skein of Roman Hills in the Bates/Downton Abbey-inspired colorway that I was drawn to when I discovered the dyer, Lisa Roman, at a BUST magazine holiday Craftacular ages ago. The combo got the approval of some knitters in the Casapinka Ravelry group, but Bronwyn cautioned me that a more “blendy” variegated colorway might be better. She was right, as the Roman Hills started working up a little stripier than I was hoping for, so I ended up switching to the skein of Rhinebeck Twilight from Sophie’s Toes that I had admired at the trunk show back in October and placed in my stash without a plan. So far, the shawl is looking great and I’m very excited to see what it becomes.

I love the color combinations that Miss Babs offers and I was very tempted to use one of them, but A. Blizzard and B. I really wanted to see what I could put together from my stash.

The experience gave me a revelation of sorts about the importance of acquiring those random skeins just because you’re drawn to them. I might be unique in that I tend to buy yarn for specific patterns I plan to knit (eventually…) because it helps temper my desire to buy All The Yarn. There is a bit of a drawback to that, because you might not have what you want on hand when a pattern comes out, and there’s a blizzard and you have to cast on RIGHT NOW. There’s definitely a balance you need to achieve if you don’t have an endless budget, space, or both. As long as you’re not racking up credit card debt, don’t feel too guilty about those impulse buys — you never know when you might “need” them.