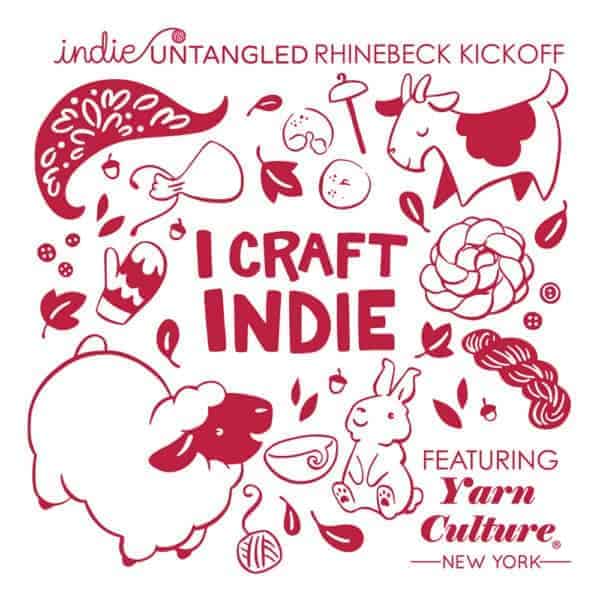 Since catching up on sleep after last year’s Rhinebeck weekend (which took a few days…) I have been very busy planning for this year’s kickoff event. My goal was to expand it a bit so I could make the shopping area bigger and also allow a few more new vendors to join us. I also decided to collaborate with an illustrator to create a design for the event that could be printed on souvenir tote bags (more on that in a bit). Well, everything has come together, so I am excited to announce that the third annual Rhinebeck Trunk Show will take place Friday, Oct. 14, 2016, from 5 to 8 p.m.! It will again be held at the Best Western Plus in Kingston, N.Y., and we’ve expanded into a third room. (Early shopping will begin at 4 p.m., though tickets sold out shortly after they went on sale last Friday.)

The full list of vendors is on the event page. I am thrilled to welcome several newcomers: Blissful Knits, ClayByLaura, Feel Good Yarn Company, A Hundred Ravens, MollyGirl Yarn, Spun Right Round, Voolenvine Yarns and The Woolen Rabbit. There will also be some newbies in the Indie Untangled booth, which will have a selection of yarn from Dark Harbour Yarn, Oink Pigments and Sincere Sheep, along with patterns from designer Jennifer Dassau, while Featured Sponsor Yarn Culture will be bringing yarn from Rosy Green Wool. Many of the vendors have some kits in the works that they will debut at the show, some of which you will be able to preorder beforehand via Indie Untangled.

Speaking of preorders, you now have the opportunity to purchase souvenir tote bags, screen printed with the illustration on the event page, to pick up at the show (and help support the work that goes into organizing it!). The illustration was created by Eloise Narrigan, a fellow knitter who you may know from her adorable bag designs for Ravelry. I reached out to Eloise a couple of months ago and explained what I was looking for — a collection of Rhinebeck-esque items, such as animals, fall leaves, skeins of yarn and apple cider donuts — and she executed my vision perfectly — and adorably.

So, get your Rhinebeck sweaters, shawls and shopping lists ready!

3 thoughts on “Save the date: The 3rd annual Rhinebeck Trunk Show is set for Oct. 14!”