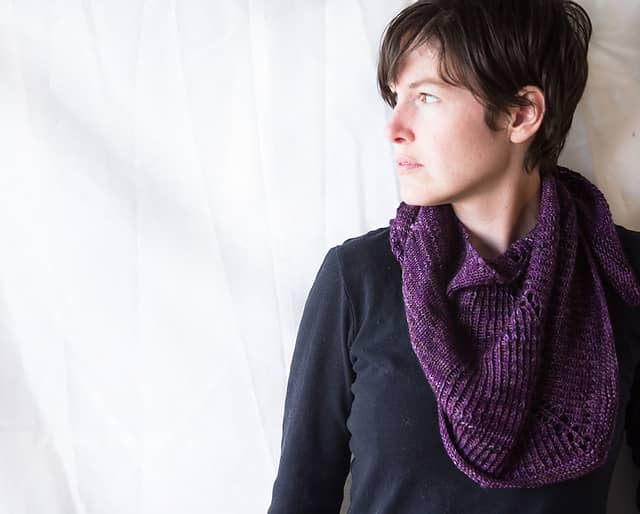 When Krista McCurdy of Pigeonroof Studios first posted photos of her GLOW colorways I was kind of in awe. I knew she dyed up some gorgeous colors, but I could tell even from the images on my laptop screen that these were special.

A while back, Krista came out with her “Luminosity” series of one-of-a-kind colorways. The GLOW yarns have similarly radiant hues, but they’re repeatable. I was curious about this special dyeing technique, which adds so much depth to the skeins, so I thought I would ask her to explain the process a bit. (You might also want to check out a great interview that Krista did a couple of years ago with Kate Ray over at Hello Knitty.)

Can you explain a little bit how dyeing for The Luminosity Project, and the subsequent GLOW colorways, is different from regular dyeing? Since you’re layering colors, do the skeins go through multiple “baths?”

So, in the repeatable colourways, for the semi-solids, I do mix solutions for them every time, but they are dyed in I guess you would call it an immersion technique — basically kettle dyed. Some of the colours just have one go in the dye-pot, others sometimes two and occasionally three (but that’s rare.) It’s a pretty streamlined process, not necessarily quick, but once the yarn is in the pot I can pop the lid on and do other things until it’s done. For the multi-colours, both fibre and yarn, I use the dye powders straight, and I have a pattern that I use for applying the colours. Those are still kettle dyed, but I guess you would call it low-immersion dyeing. I never know what to call it, since I just came up with it on my own—I never took any classes or tutorials.

Those are the repeatable colourways. Now, for the Luminosity colours, when I started doing those, it was a way for me to really play with colour and go where my visual sense took me. Low immersion kettle dyeing as well, but I would (and still do) combine mixed solutions and dry powder application. It is a layering process, and I don’t measure anything.

The Glow colourways came out of me feeling bored with my normal colourways. I really like coming up with new colours — the production aspect is my least favourite part of dyeing. The Luminosity colours always came out really well, so I started thinking about how I could combine my processes but be able to document the process so I could repeat them. With the GLOW colourways, the yarn does first get dyed a base colour, which differs from colourway to colourway, then the dye gets layered on. I have a set of very tiny measuring spoons which makes the documentation possible — those changed my life! I’m terrible at math, so I don’t weigh anything. This way I can write down how much dye to how many cups of water for the solutions. The powder application is just by my own touch — I’m pretty consistent after doing that technique for seven years. Again, it’s a layering process, and every layer is documented. Like with the multi-colours, I have a surface pattern that I use to know where to put the dyes.

How long does the dyeing process take?

Too long! Seriously, though, it’s an incredibly time consuming process. First the yarn gets dyed the base colour, which is probably the shortest part of the process. Once I start layering the colours, that can take up to an hour and a half, give or take some. Some colours are quicker than others. Each layer of dye has to strike before I can apply the next one, and since the yarns are dyed in batches of four (two pots, two skeins to each pot), it’s not a quick production process. I think it’s worth it though! 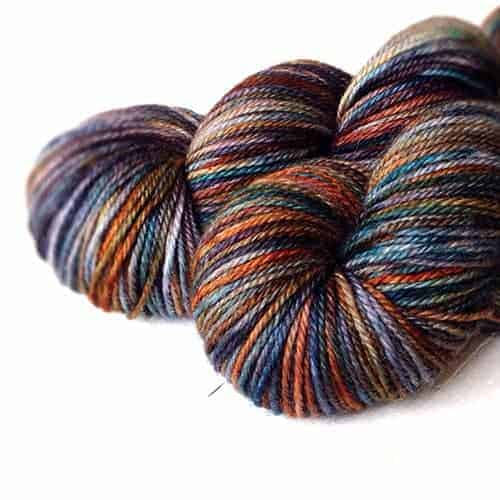 Which of the colorways are you most proud of? Were there any that were particularly challenging to create?

I’ve ended up being very fond of Railroad Stake, Meteorite, Ocean Waves, and Peacock. I’ve liked Peacock since the beginning, but for some reason it’s one of those colours that doesn’t sell as well as others. I’m probably the most proud of Meteorite.

Since I don’t start out with a clear vision of what the colourway will look like when it’s done, none of them were particularly challenging to create, it was more a matter of “how many more layers until this is done!” I’ll start with a general colour idea, like, Oh, I want to do something with blues, or greens, and then it goes from there, and as the colours are layered on, they tell me what the next one should be. It can be surprising — Railroad Stake and Meteorite (and Copper Mine, too, that was the launchpoint colourway for those two) are colourways that I still look at and think, “Really? I came up with those?” I don’t know exactly why they surprise me, but they feel very sophisticated to me….and I don’t usually feel like a very sophisticated dyer!

Have you completed any projects with the GLOW yarns?

So far I’ve knit a pair of mitts, an Herbivore in Lavendula and I’m in the process of making a Colonnade shawl in Bacchus Aran in Railroad Stake.

Probably the next project will be a garment, although there are a couple of shawl/scarves that are calling my name too. 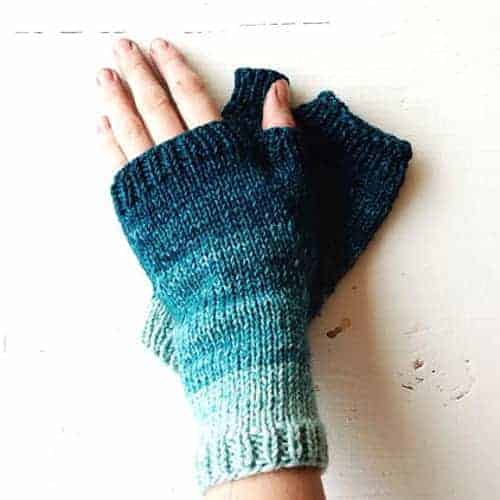 You recently published a pattern for your miniskein gradient sets. Do you plan to design more patterns?

I would like to! The main stumbling block for me pattern writing wise is that I don’t think in 3-D. Like, at all. When knitting something, it will usually take me halfway through (or even longer!) to understand what is going on. Until then, I’m knitting blind. Writing the pattern for a very simple pair of mitts took forever.

So yes, I do plan on it… but it’s going to be a very slow process! Finding time to swatch and make endless mistakes is tough as well—besides the dyeing, there’s so much admin work to do, including the photographing of the yarns, the processing of said photographs, the listing, the shipping… If only I didn’t need sleep!

You’ve worked as a letterpress printer. Are there any similarities between printing and dyeing?

They’re both very visual, requiring a good eye for both colour and detail. I also think they’re a skilled trade, and the only way to be any good at either of those are to do them a LOT. Even then, there is always more to learn, always more ways to improve.

I have to say, though, the dyeing is quite similar to the painting I used to do and the fine art printing I used to do — I have a BFA in printmaking. I went through a whole period of making monotypes (using many runs through the press) that looked like rust. (I unfortunately can’t find the best one of those.) My work utilized a lot of layers, just like my dyeing does. I’ve always had a good and unique sense of colour, though, which has been the biggest help to me. 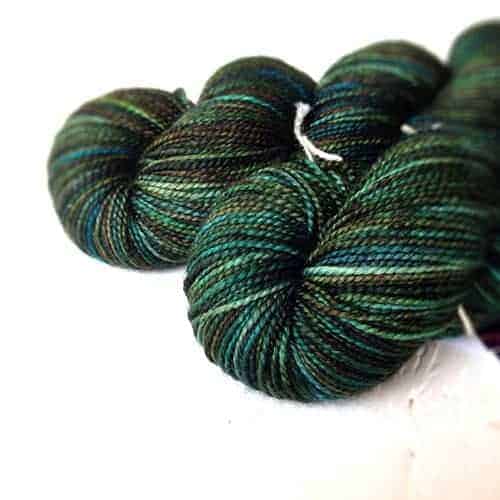 Krista has generously offered up a skein of her Silky High Twist Sock in the Peacock colorway to a lucky reader. To enter, comment and tell us what you would make with this beautiful skein. Pattern links are definitely welcome! You have until the end of the day my time on Sunday, Aug. 10, to comment. Good luck!

This giveaway is now closed