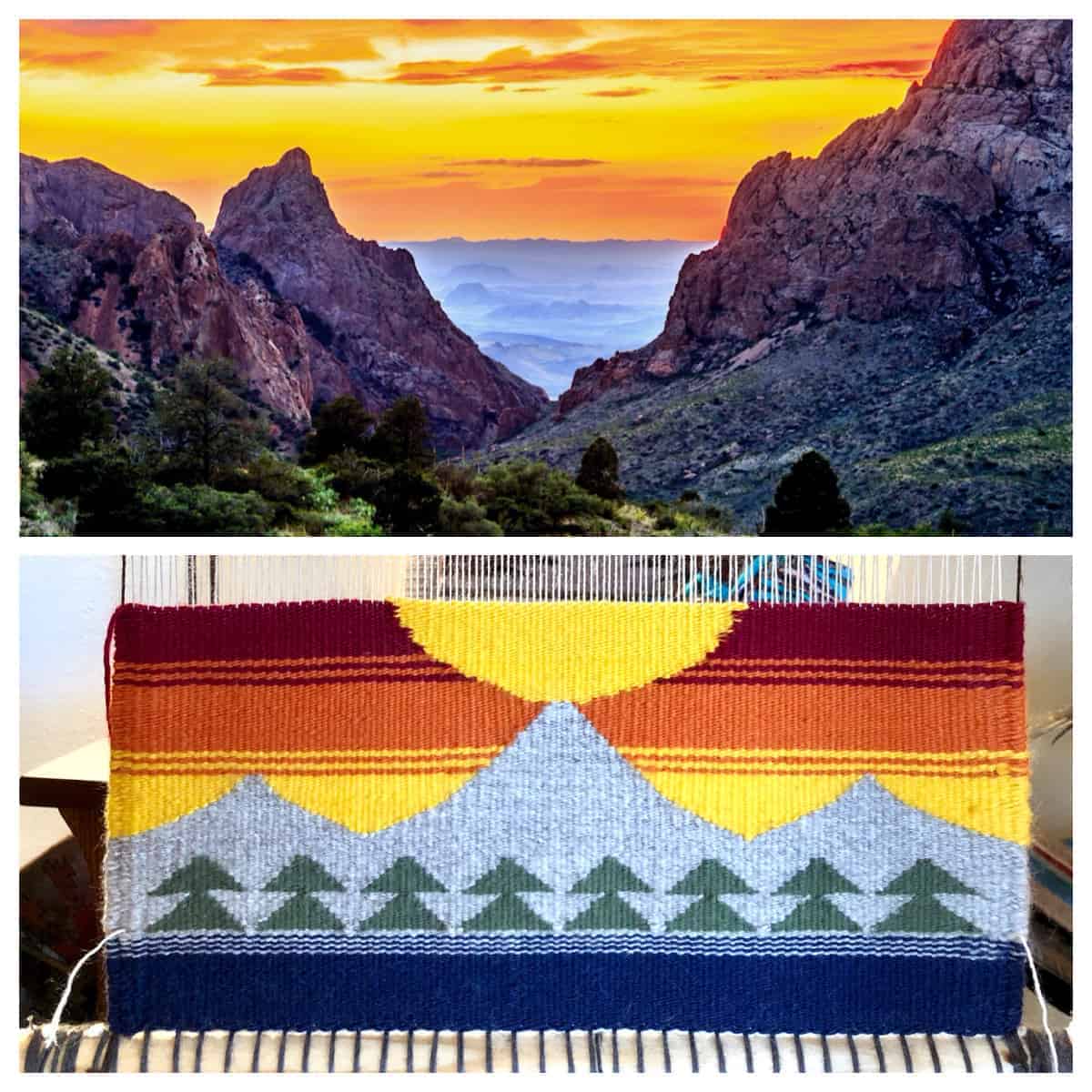 A few weeks ago, after Robin of Birch Hollow Fibers chose an inspiration photo for her installment of Knitting Our National Parks, I contacted the photographer to get permission to use the photo and send a use fee.

Through my text thread with Nina Mayer Ritchie — her husband, Eric, was the photographer for the Great Basin National Park photo that Robin picked, but they both take the stunning photos in her feed — I learned that there was a deeper connection to the fiber arts — and a fascinating story that the reporter in me had to tell.

Nina has been taking Navajo weaving lessons from Emily Malone of the Spider Rock Girls, a family that has been weaving rugs for four generations. Emily’s mother, Rose Yazzie, owns a Hogan, a traditional dwelling of the Navajo people, and has a flock of sheep that provides the wool for their pieces, which they sell (I’m planning to post an interview with Emily as well). Above is an in-progress rug that Nina is weaving inspired by a photo she took of sunset through the “Window” at Big Bend National Park in Texas.

Nina and Eric also have an impressive track record in the national parks, having visited 48 out of 62, some with their two young children. Both Nina and Eric are MedsPeds physicians (dual board certified in internal medicine and pediatrics), and they have been working over the last several months in Chinle, Arizona, the geographic center of the Navajo Nation, which for a period of time had the highest rate of COVID-19 cases per capita in the country. Eric is the chief medical officer of the Indian Health Service (IHS) hospital there and Nina works with the Johns Hopkins Center for American Indian Health as a public health doctor.

I spoke with Nina about learning Navajo weaving, her family’s parks visits and about the public health response to the coronavirus in the Navajo Nation. In addition to supporting the parks, 10% from the sales of Robin’s colorway will be donated to the NDN Collective COVID-19 Response Project. 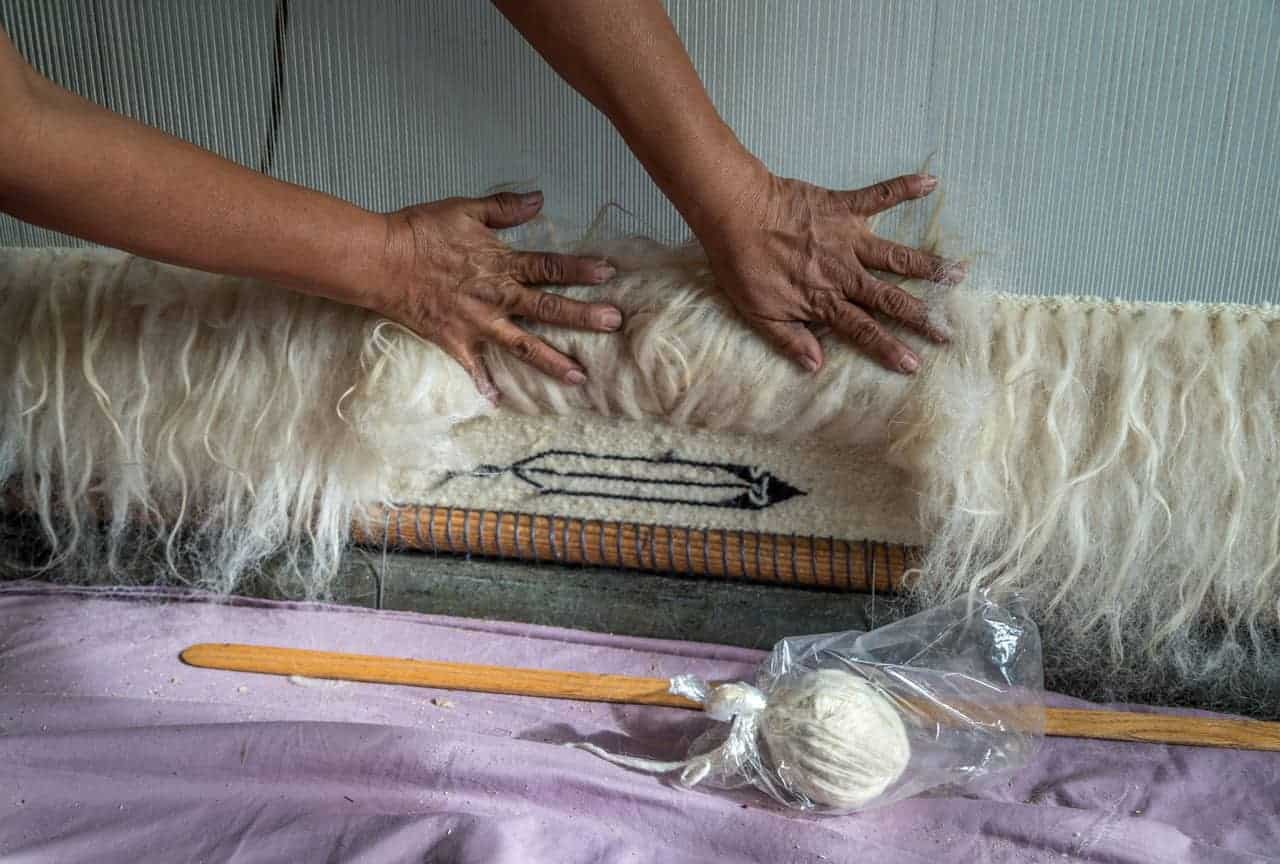 Tell me about your weaving lessons. Have you done any other fiber crafts (knitting, crochet or spinning)?

I started taking weaving lessons from a local weaver in March 2018. She is part of a family of weavers called the Spider Rock Girls. Her mother weaves and taught her, and then she taught her daughters. They live near Spider Rock in Canyon de Chelly. According to Navajo teachings, Spider Woman lives atop Spider Rock and bestowed the gift of weaving to the Navajo. The Spider Rock Girls keep their own herd of sheep and sheer them to spin the wool into yarn for weaving.

This weaver has been offering weaving lessons to a small group of us over the last few years. She made looms for all of us, and we would typically meet one to two times per month to weave and learn together. Now with COVID, that has been put on hold, but we each have our own loom at home and weave individually. I learned how to crochet with my Yiayia (grandmother) when I was a little girl, but weaving in the traditional Navajo way with a loom is completely different! 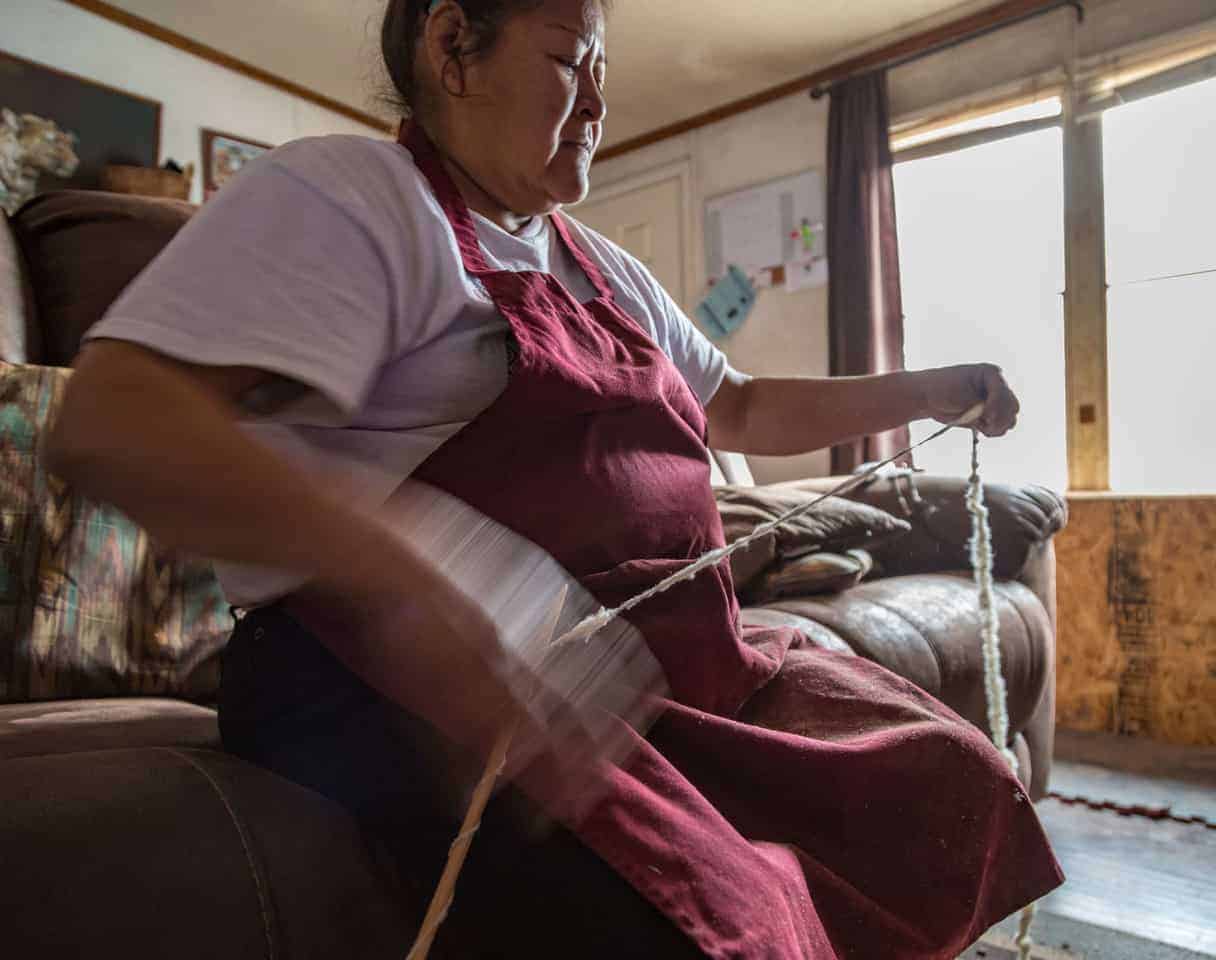 Emily spinning yarn from her sheep before weaving.

It sounds like you and Eric are longtime hikers! When did you start visiting national parks?

We actually didn’t start “seriously” hiking until our honeymoon to Kauai in June 2008. After that, we immediately moved to Boston to start our residency training and found that during our off-time – without having access to a car – we would walk/hike the entire Boston area pretty regularly… roughly 11-12 miles on an average weekend day.

The first national park we visited together was the Grand Canyon, where we hiked North Rim to South Rim with my father during the last week of June 2009. It was the first time we had ever visited the Southwest, during record high temps, and we were smitten. It was one of the most formative experiences of our lives and we truly became enchanted with this part of the country. After that, we kept seeking ways to return to the Southwest to visit more national parks and to complete clinical rotations with the Indian Health Service.

We had always felt strongly about providing medical care to underserved populations and the Indian Health Service seemed like the best fit for us. As we visited more and more national parks, both out West and back East, we realized that our time spent in the parks was incredibly restorative and balancing especially while juxtaposed to our hectic schedules as medical doctors. We have visited 48 out of 62 national parks so far and it is our bucket list to visit them all together. As we started having children, our little boys visited the Grand Canyon as their first national park when they were each 2 weeks old. They have visited over 25 national parks each. 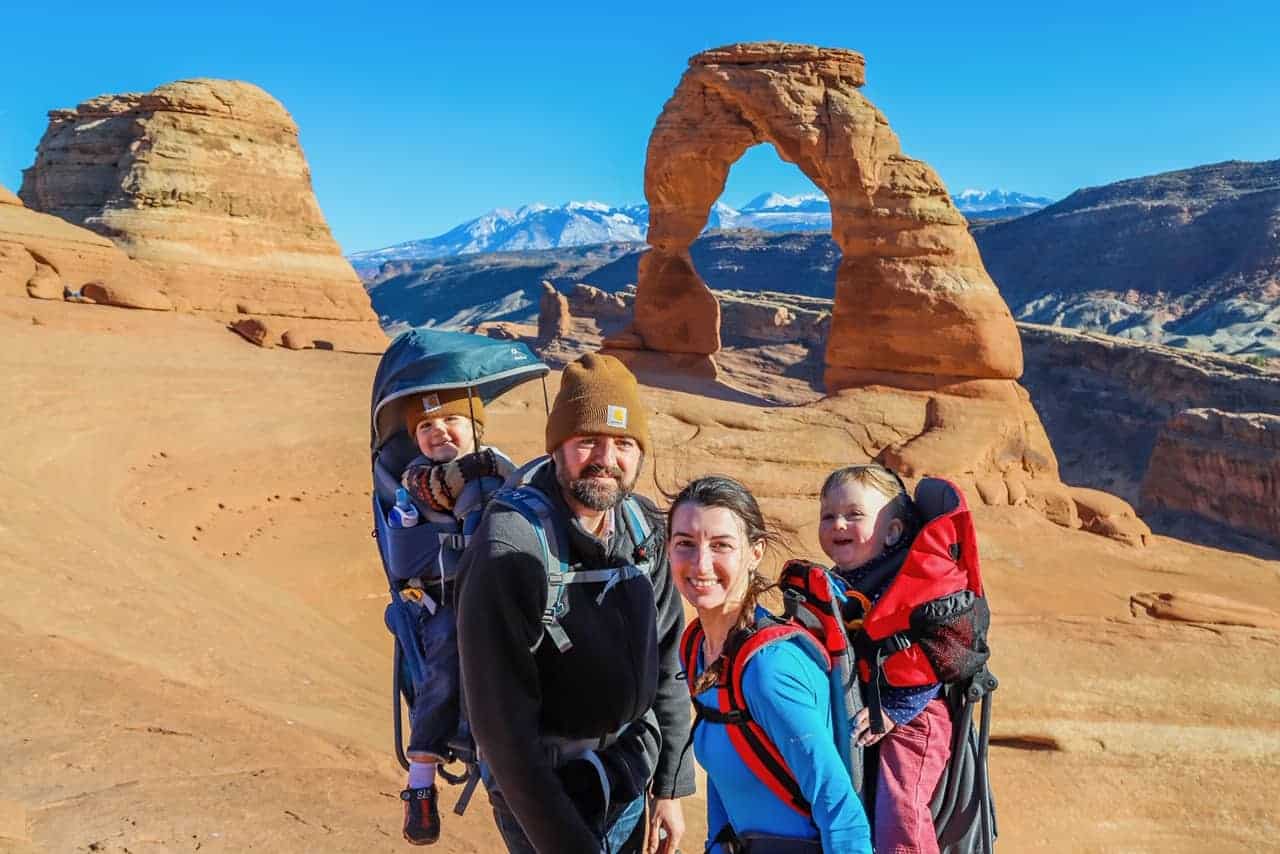 The Ritchies at Arches National Park in Utah.

Do you have a favorite national park?

This is the toughest question for us, and we get asked this all the time! I think we love different national parks for different reasons, and each could be considered a favorite in their own way. We are also very lucky to live close to so many of them, and we get to revisit these ones (roughly 15 of them) over and over again. Before spikes in visitation over recent years, I think we would easily say that Zion, Yosemite and Glacier were our top three, as these parks truly fill you with awe and wonder when you are immersed in them. However, as those parks have become more and more crowded, even during the “off season,” we have a new appreciation for the parks that are either off the beaten path or have enough space to really spread out. These include Death Valley and Big Bend. 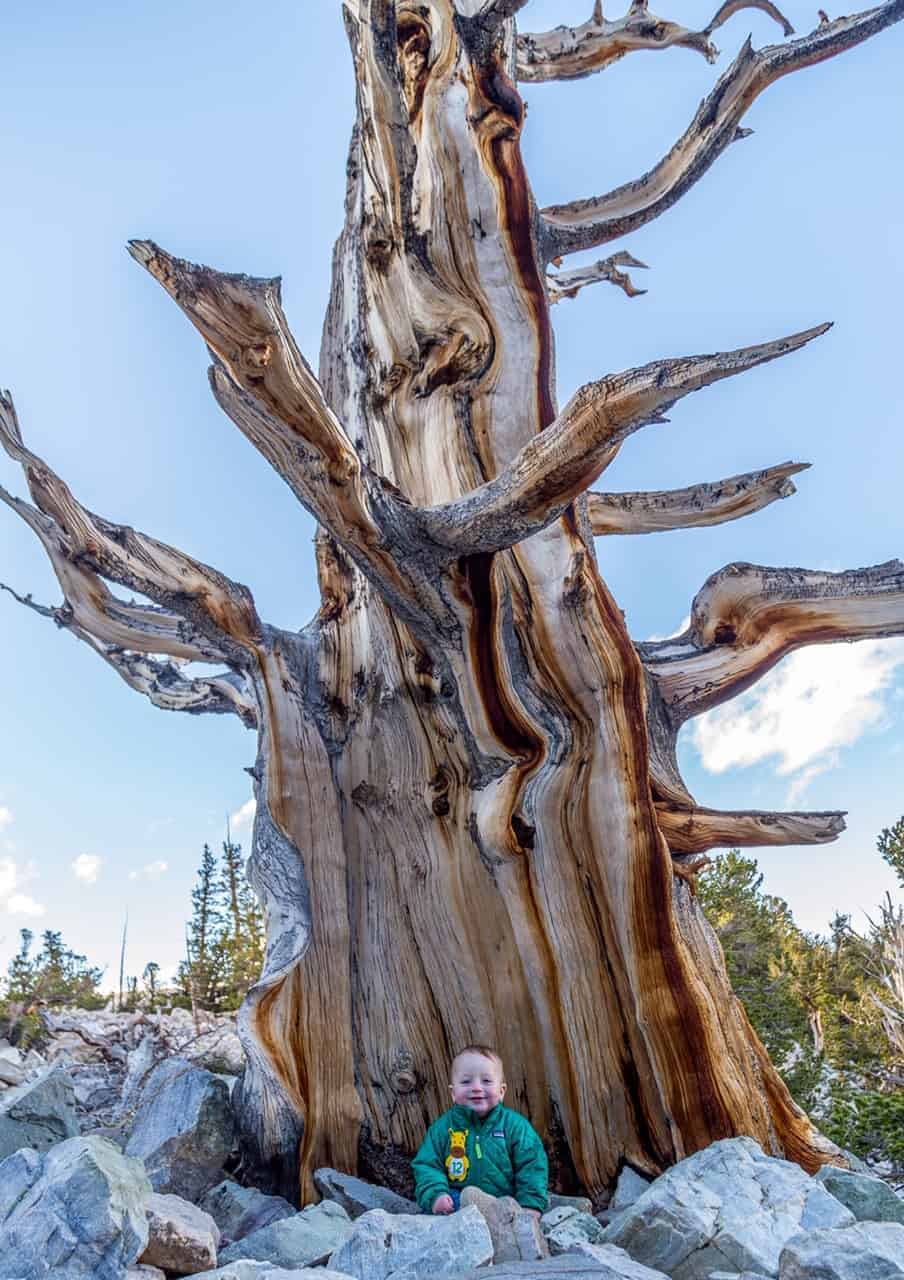 James, the couple’s youngest son, in front of a Bristlecone Pine in Great Basin National Park.

What’s the story behind your photo of the tree at Great Basin?

This photo is from an incredible camping trip we took a few years ago to celebrate our youngest son’s first birthday… with the oldest living things on the planet: Bristlecone Pines in Great Basin National Park! This was his 17th national park visited during his first 12 months of life.

We had the coolest campsite up on Wheeler Peak, and spent an entire afternoon hiking around the impressive Bristlecone Pines, scouting out a favorable one to photograph later that night… My husband then hiked back out over a mile in the dark (while I stayed back, cozy with the kiddos in our camper) to reach this awesome tree and photograph it with the night sky. Such a fun memory!

How did you and Eric begin working for Native American healthcare organizations?

During our first year of residency, we attended a Grand Rounds held by two other married physicians that had completed our same residency program a few years prior. They had been working with the Indian Health Service in the middle of the Navajo Nation and everything they shared with us about their experiences truly spoke to us. We arranged to have two clinical rotations with the IHS, one in 2009 and the other in 2010, and fell in love with the communities we served. We decided to join the IHS in Chinle, AZ (the geographic center of the Navajo Nation) after completing our residencies in 2012 and have been here ever since. I transitioned into public health in 2014 with the Johns Hopkins Center for American Indian Health and Eric is still with the IHS.

Can you talk about how the COVID-19 crisis has hit the Navajo Nation and Native Americans particularly hard and what kind of work have you and your colleagues been doing to address this?

As many have probably seen in the news, the Navajo Nation had the highest rate of cases per capita in the country for a period of time. Contributing factors include remote and impoverished living conditions (difficulty accessing resources, such as medical care, grocery stores, etc.), lack of running water and electricity, multigenerational/overcrowded households where the virus can easily spread throughout the family, higher incidences of underlying medical conditions such as diabetes, obesity, hypertension, and lung disease, limited access to broadband/internet, as well as difficulties with “staying home” when folks have to travel long distances to obtain supplies. With strict and comprehensive public health measures, such as universal masking, social distancing, limiting capacity in essential businesses, and curfews, the Navajo Nation decreased their case counts and have been flattening the curve. The mortality rate among Navajo is still the highest of any ethnic/racial group. Through our work, and collaborations with other philanthropic groups, we have been integrally involved in the public health responses here: increasing testing, increasing hospital capacity, increasing resources and securing PPE, developing and distributing educational materials, expanding contact tracing, supporting communities through delivery of goods and water to households, etc. 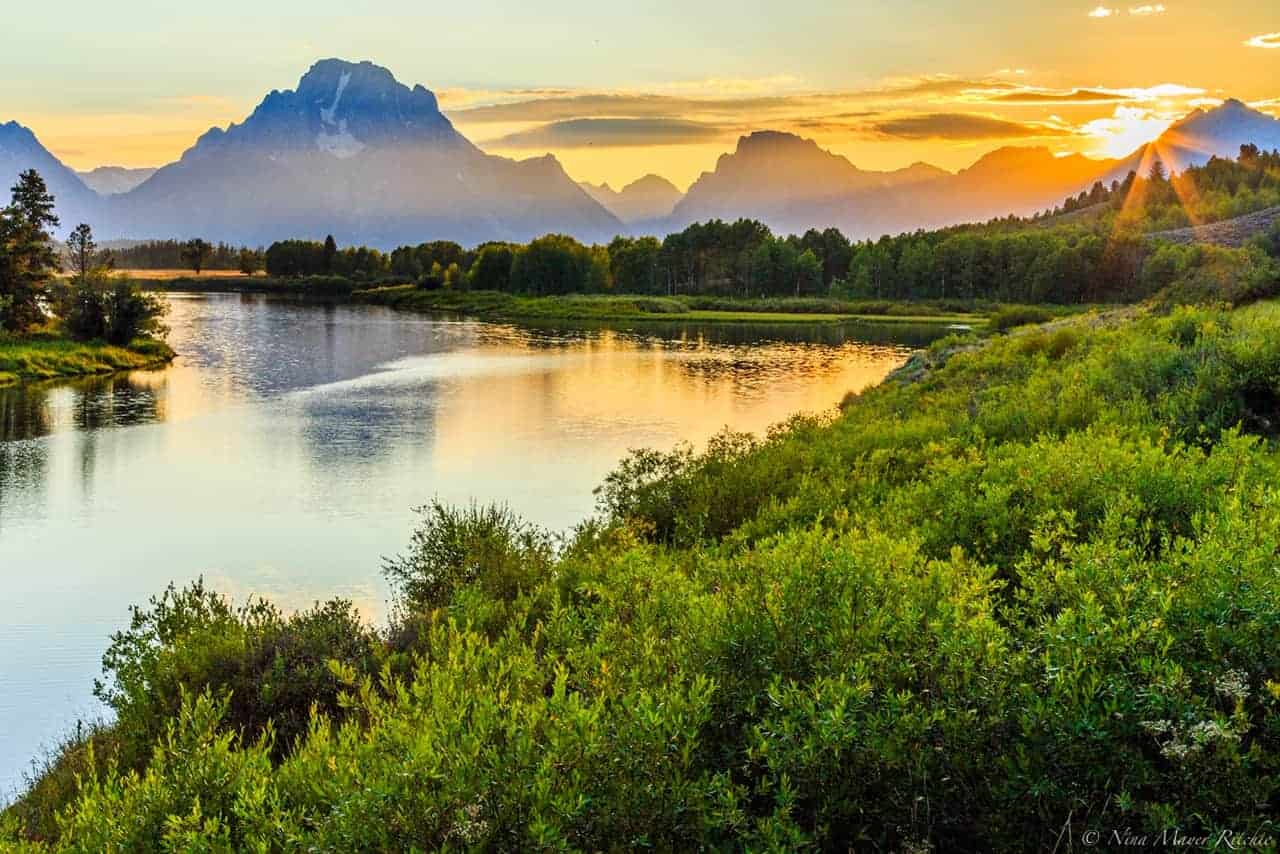 How has the pandemic impacted your travels? As physicians, do you have any advice for people looking to safely explore the country?

The biggest way the pandemic impacted our travels is that it prevented us from taking previously scheduled time off. With Navajo Nation weekend curfews and the increased workload, we needed to stay put and work. No more weekend camping trips for around three months straight, which is very atypical for us (we usually camp almost every weekend). As things have slowly improved on the Navajo Nation, we have been able to venture out a little more, but we are sticking to dispersed/boondock camping in more remote areas to remain physically distanced from others. We are now discovering some hidden gems.

I think the advice we would offer folks looking to safely travel during pandemic times is to think about their own risk tolerance and how that (and their actions) may affect others. Getting through this is going to take a “team” effort and we all need to do our part.

Outdoor spaces are generally the safest option for recreating, and getting there by personal vehicle is preferred. Identifying places that are not crowded is ideal.
I know we all love to visit our iconic national parks but these spaces are at risk of being “loved to death,” especially during these challenging times when everyone is looking to get outdoors and away from others. It’s getting harder to achieve this as our national parks get more and more congested. I would encourage travelers to look for hidden gems closer to home in other public lands that don’t normally get as much attention as our national parks.

2 thoughts on “Weaving together Stardust in Basin”