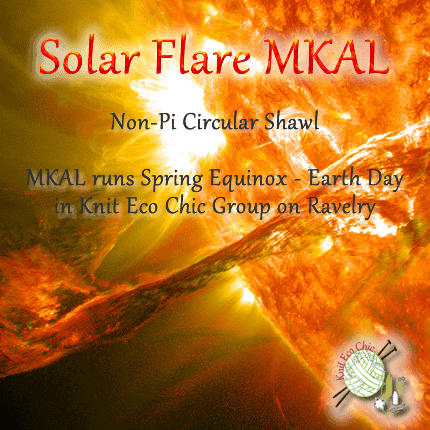 The MKAL runs in the Knit Eco Chic group on Ravelry from the Spring Equinox (March 20, 2015) to Earth Day (April 22, 2015). Join us and knit your own solar inspired non-pi circular shawl in organic cotton & bamboo yarn! The tech edited & test knit intermediate level pattern is fully written & charted with stitch demos too.

Ready to board? Here’s your pre-flight check list. Be sure to order your yarn from The Unique Sheep early so you ensure its arrival by the start date! To order, choose 300 grams under skein size, “Gradiance” as color way type, and then put in the colorway name. Or if you do not want to use Gradiance, select 300 grams as a “Regular” colorway. For color suggestions, check out the Solar Flare MKAL thread in the Knit Eco Chic Ravelry group. (Note: if you have allergies, like I do, simply request no essential oils in the dying process.)