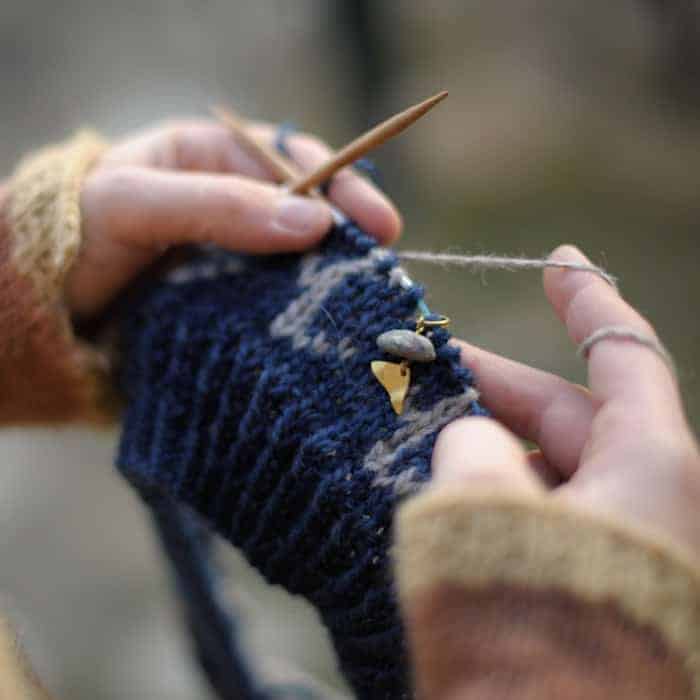 If you’re interested in getting a sample of one of my favorite discoveries from Barcelona Knits, Stefania and Giulia of Lanivendole are opening preorders today for a special yarn club called BY THE SEA. For this one-package club, they are dyeing 200 grams of a new blend of Italian Wool and alpaca in an exclusive colorway, and including two accessories, from Marianna of isewsoidontkillpeople and Alice & Eleonora of Last One Stones.

The kits will be listed in the Lanivendole shop at 5 p.m. CEST (that’s 10 a.m. Eastern) and will be open until January 20, or until they’re sold, with shipping in early February. 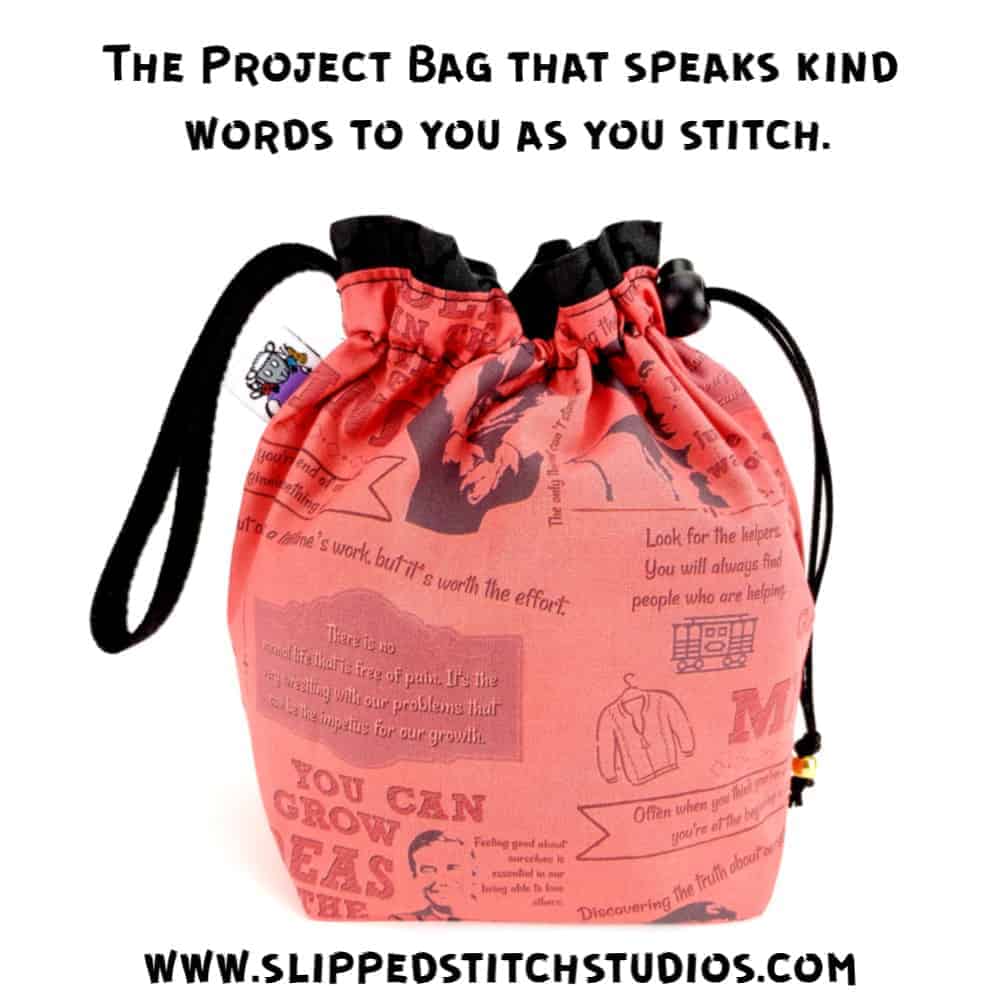 We need a little Mister Rogers in our lives, now more than ever, so it’s fitting that Laura of Slipped Stitch Studios is ending the year with one of her most requested fabrics of 2019. This tribute to our favorite neighbor will go live in the Slipped Stitch Studios shop today at 9 a.m. Pacific Time and orders will ship today and Monday. 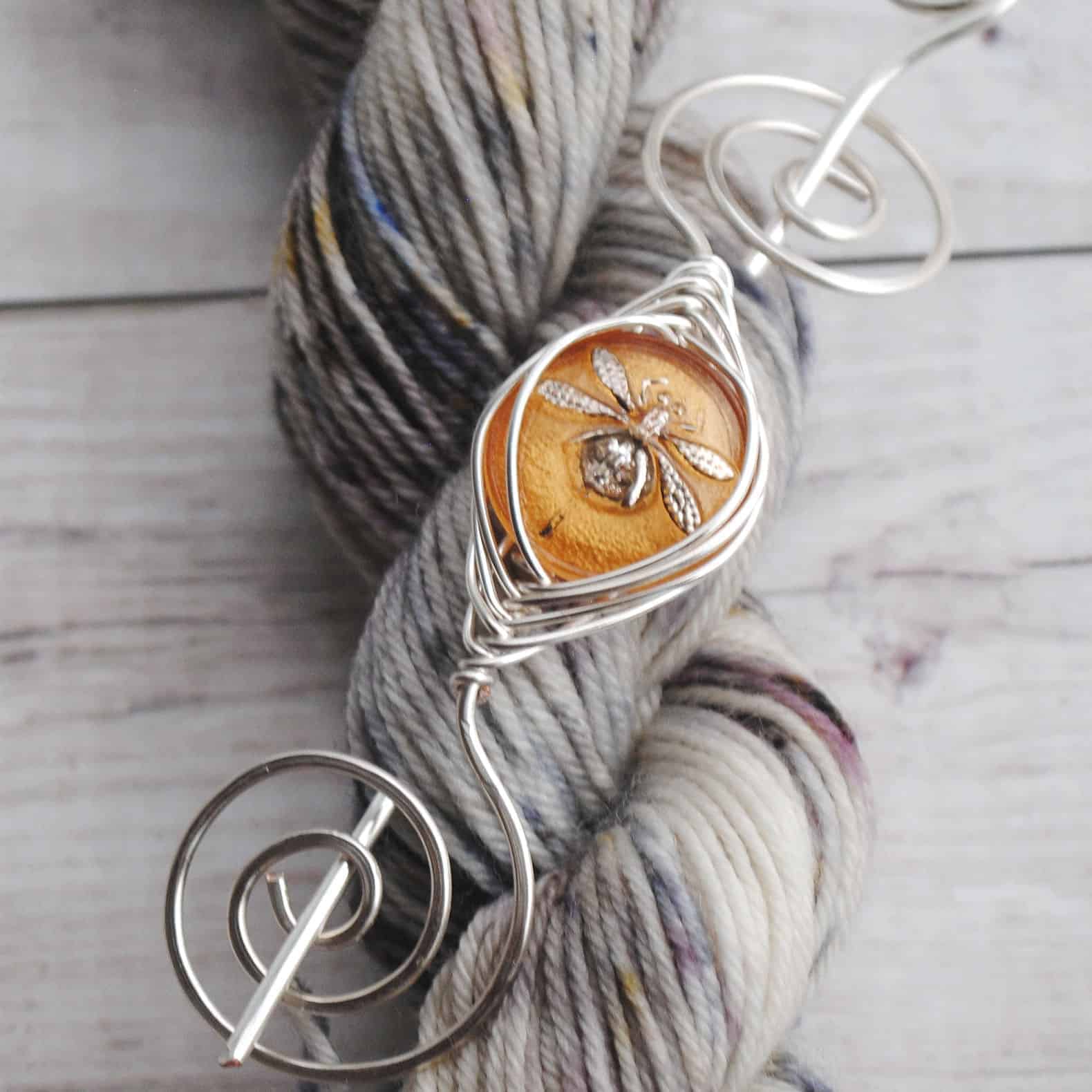 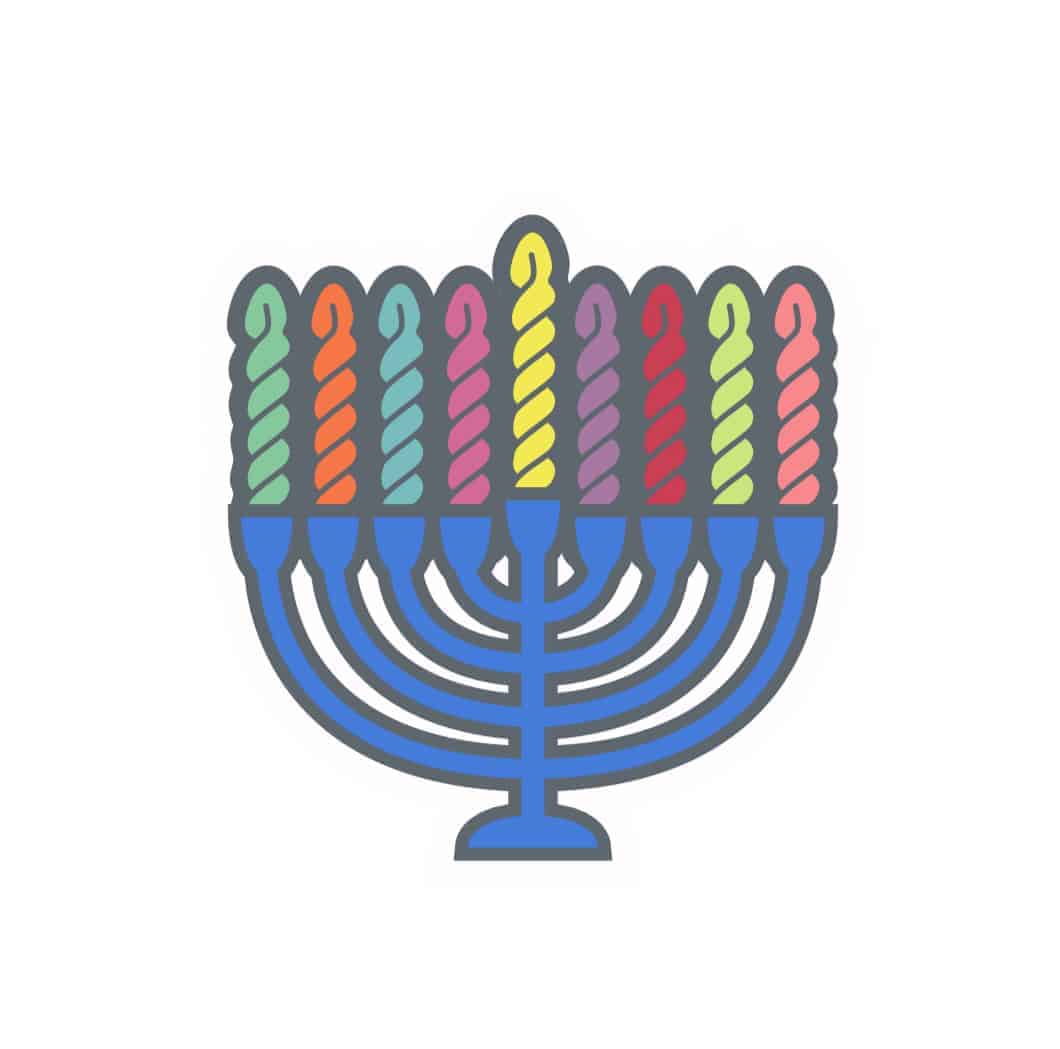 The Indie Untangled Eight Nights of Hanukkah Kits have shipped, which means there are some extra goodies available! Shop the Indie Untangled Hanukkah shop before the first candle is lit on Sunday. Orders made today through Sunday will ship out on Monday and should arrive before the end of the holiday, depending on where you’re located. (If you purchased a kit, don’t click the link and spoil your surprise, though there are Spoiler Alert photos just in case!) 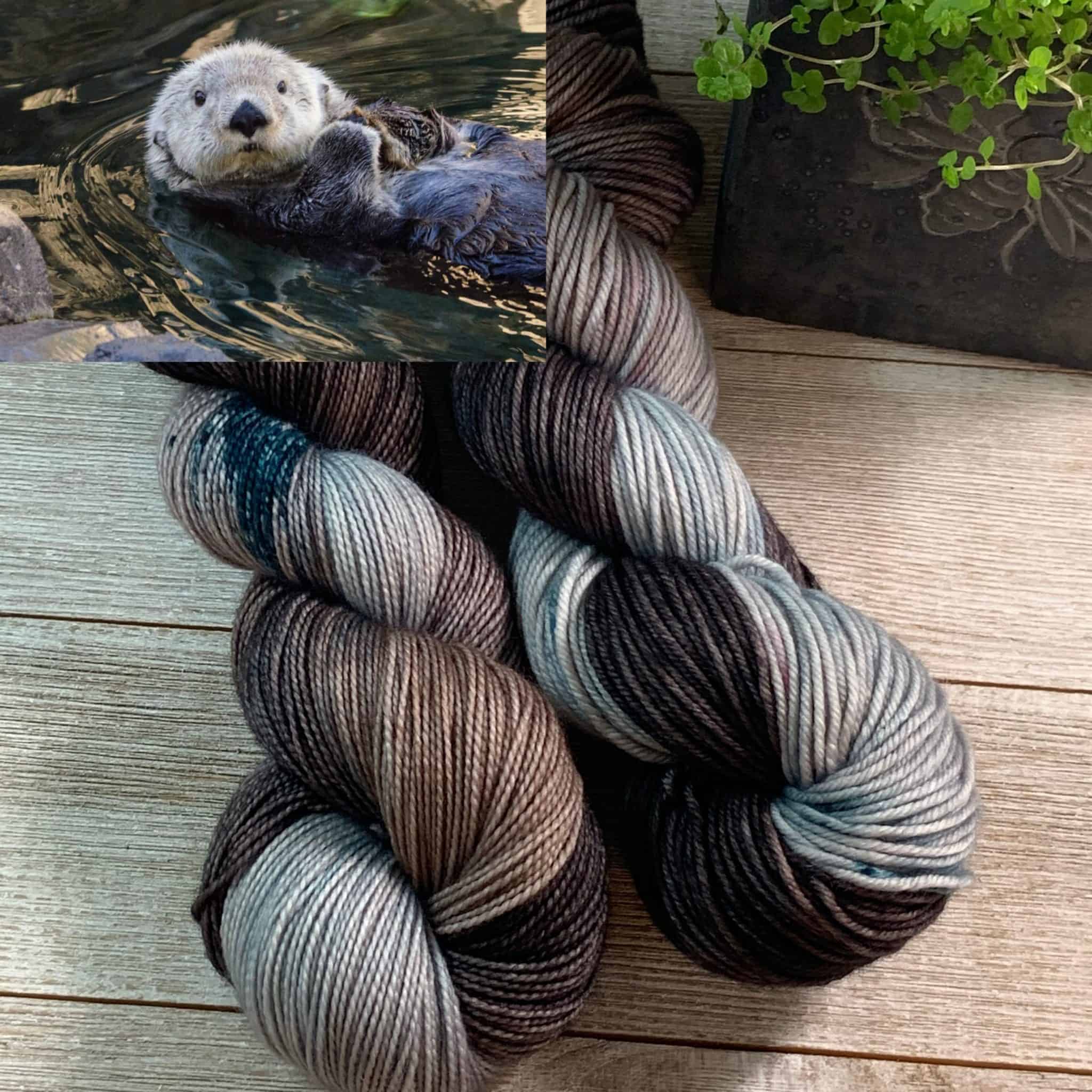 Today is the last day to preorder the otterly adorable Knitting Our National Parks colorway from Kim of The Woolen Rabbit. 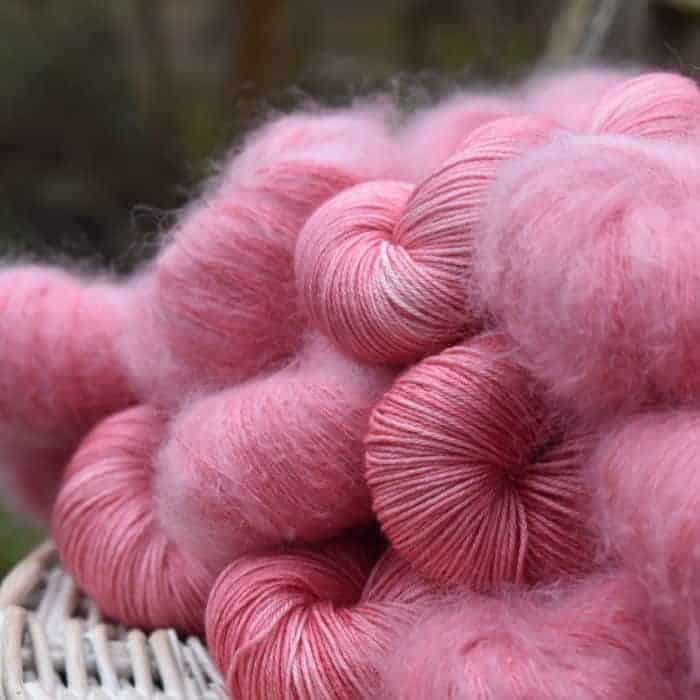 Victoria of Eden Cottage Yarns is having a special update planned for this Tuesday, with some Titus 4ply, a Merino and silk blend, Eldwick Lace mohair and silk and some Hayton DK MCN. This random assortment supports an upcoming pattern release that is expected to be quite popular. 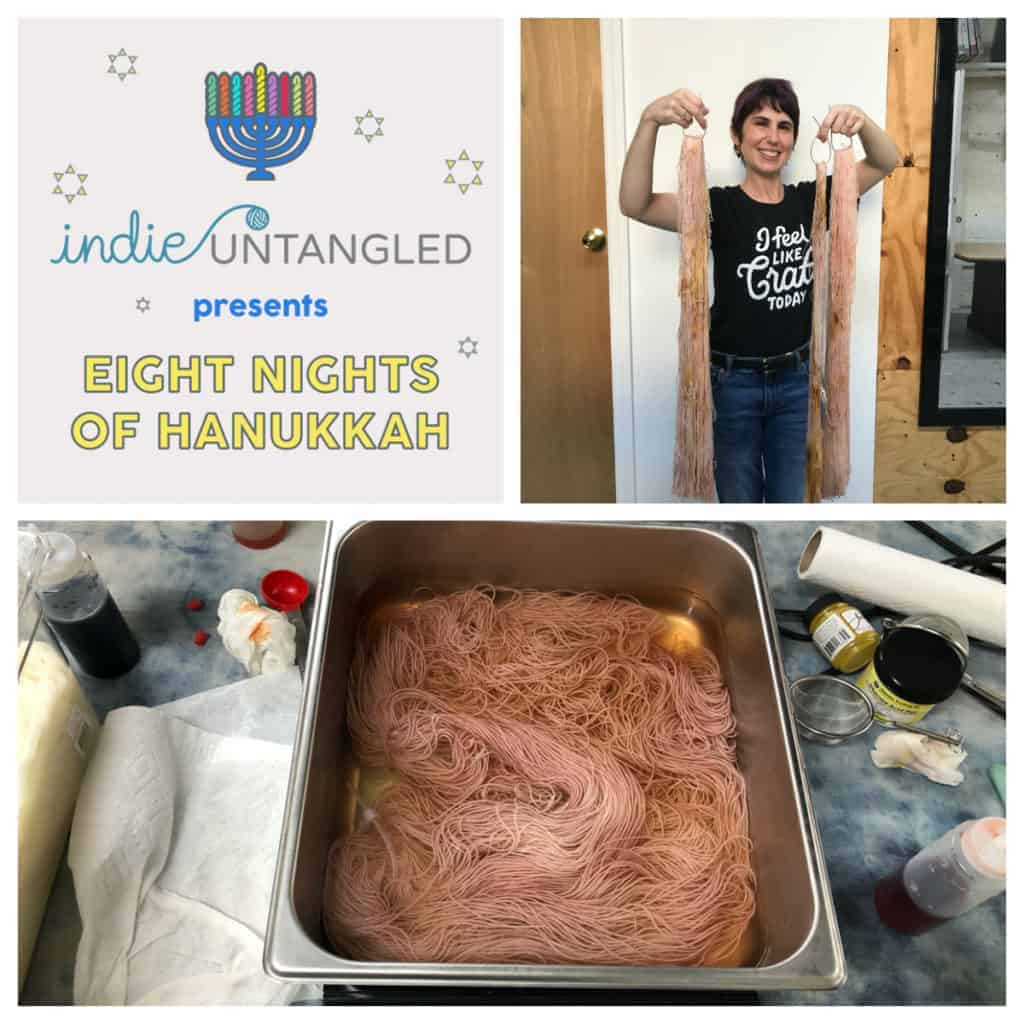 The latest Indie Untangled project, the Eight Nights of Hanukkah Kit, is gratifying to me for a couple of reasons. Firstly, I get to celebrate my Jewish heritage and share that joyful feeling of opening a gift each night with my fellow yarn lovers.
⁣⁣⁣⁣
The second reason I’m excited about it is that after taking a dyeing workshop with my friend Geraldine of the newly-launched yarn line The Wandering Flock, I’ve been inspired to add my own work to the kit. So, in addition to full skeins (or the mini set equivalent) from Blissful Knits, The Fiberists and Pandia’s Jewels, there will be a true IU exclusive in the package!

Preorders are limited and open only until next Friday, November 15. 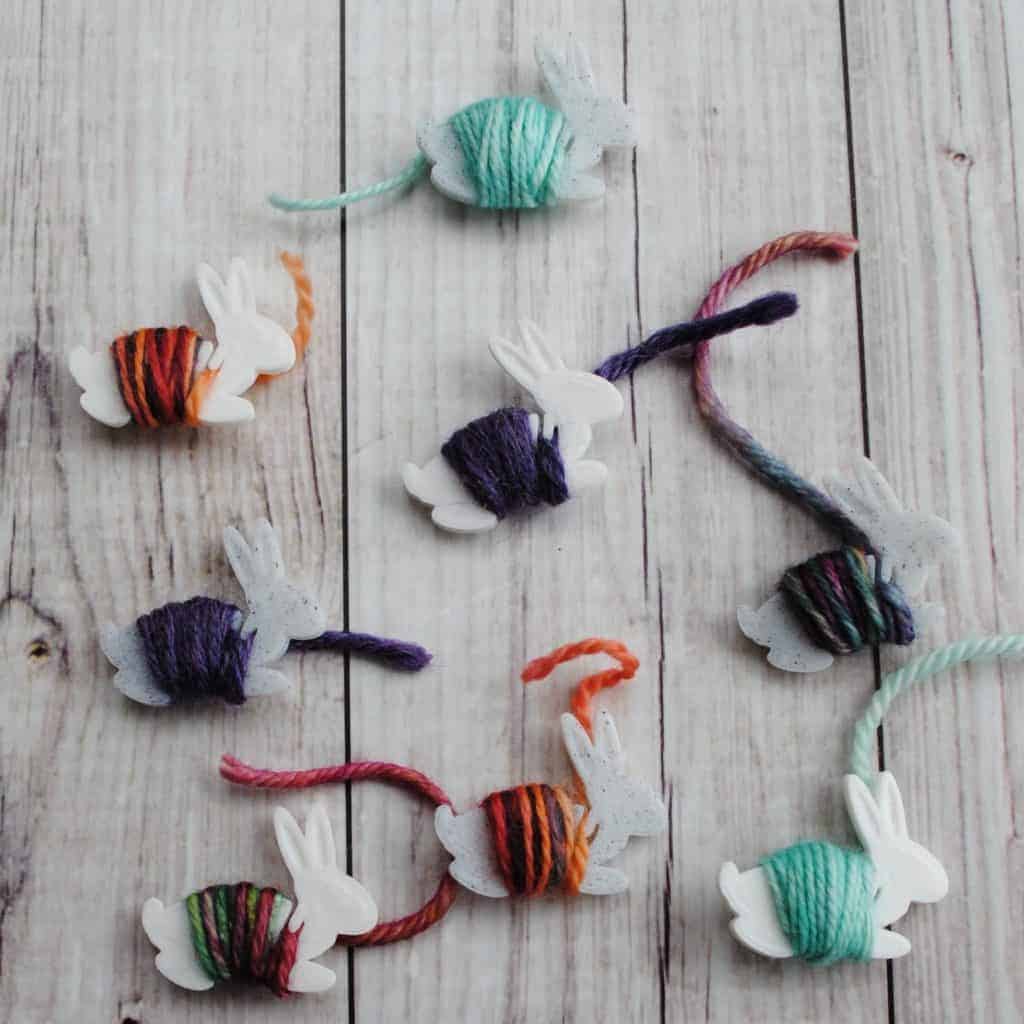 Bunny Hugs are a clever invention from Michelle of Crafty Flutterby Creations. She created these animal-shaped “end minders” earlier this year to solve the problem of cast on-tails getting tangled. While some knitting friends suggested using bread tags, they didn’t always do the trick and weren’t exactly an attractive fiber accessory. So, after Michelle’s family got a 3D printer for Christmas last year, and she set about building her menagerie, starting with what she named the Suavest Sheep and then bunnies. 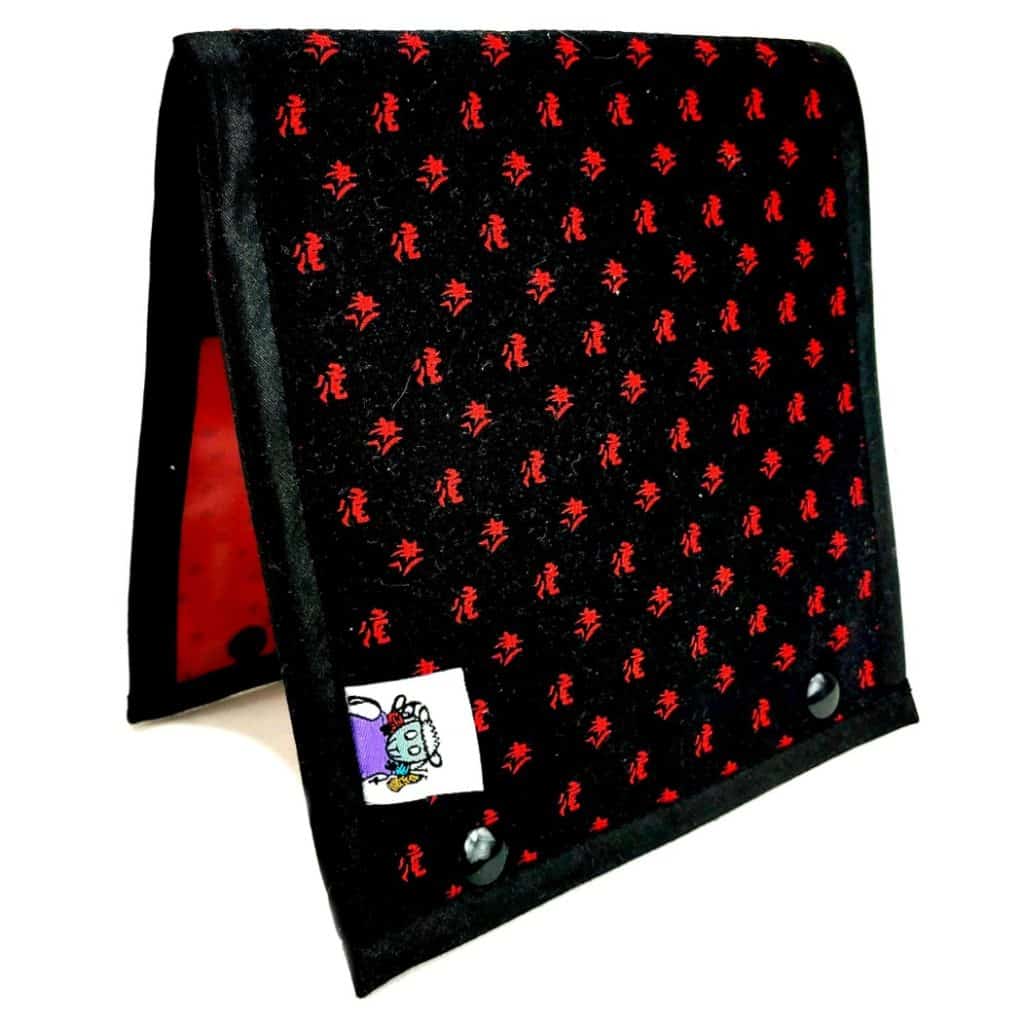 Laura of Slipped Stitch Studios is debuting a brand new travel size needle and hook organizer. It will be available in several different fabric options today at 9 a.m. Pacific. 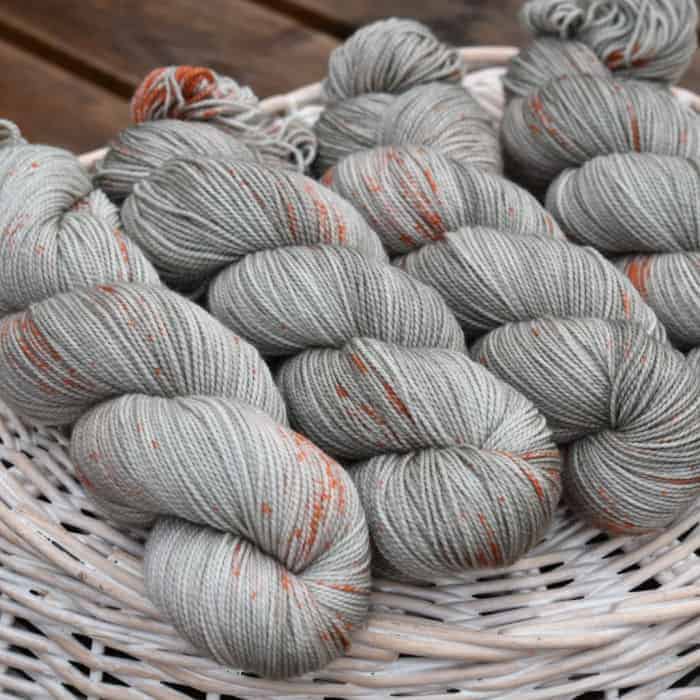 Victoria of Eden Cottage Yarns recently debuted her new Brimham High Twist base. It has the same 85/15 blend of extrafine Superwash Merino and nylon as the Brimham 4ply, but with two strands twisted tightly together. 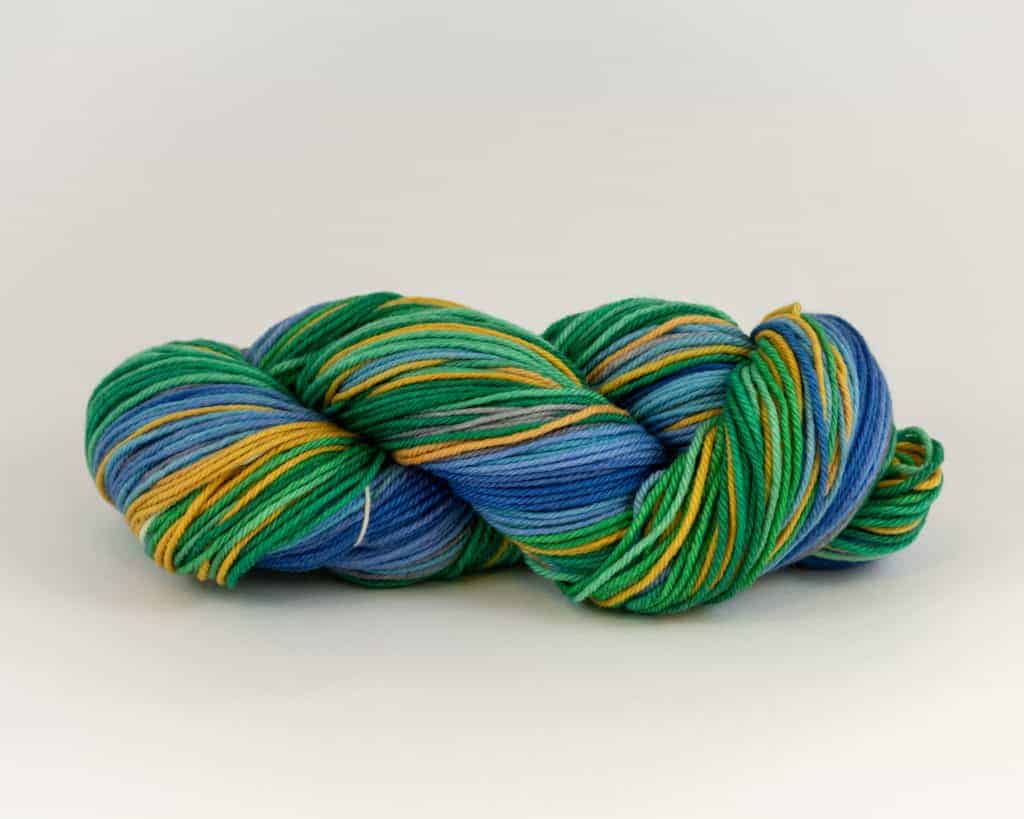 I was so excited to get to work with Catherine of Gauge Dye Works again on another special self-striping colorway. This is called Field and Pasture and is inspired by a fall colors on the horizon. It’s available on a Merino Worsted with generous yardage for those cozy winter scarves or baby sweaters.

In addition to being available in the shop, this colorway will also be at the Indie Goes West: Hollywood Edition popup in LA tomorrow. 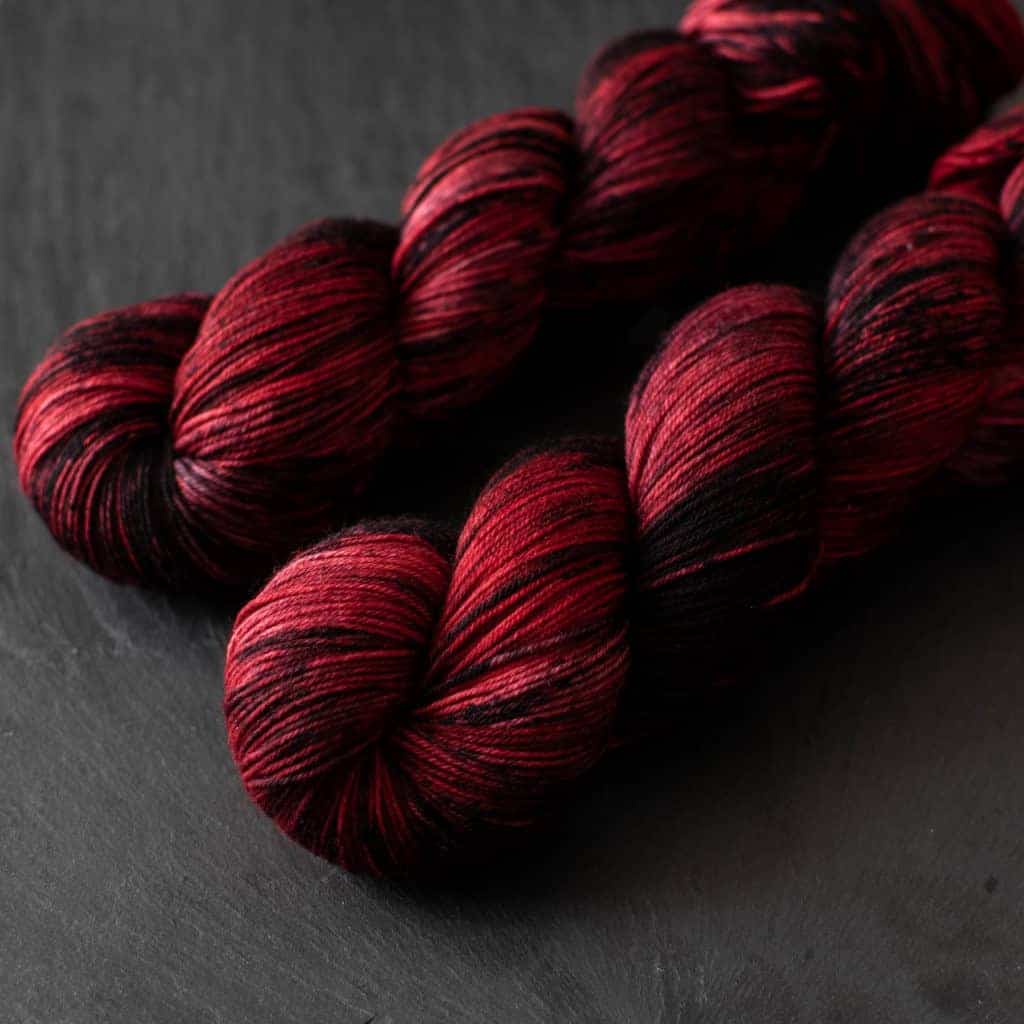 Elizabeth Colorful Eclectic has launched her Murderino Collection, inspired by the hit true crime/comedy podcast My Favorite Murder, and named for its adoring fan base. The collection includes nine colors with a black dappled effect. They include the signature red dubbed “Stay Sexy, Knit a Sweater,” and a chilling green called “Toxic Masculinity Ruins The Party Again.”

And perhaps the best thing about this collection? Through the end of the year, Colorful Eclectic is donating $2 from each skein of the Murderino Collection sold to End the Backlog, an initiative to eliminate the backlog of untested rape kits in the United States. 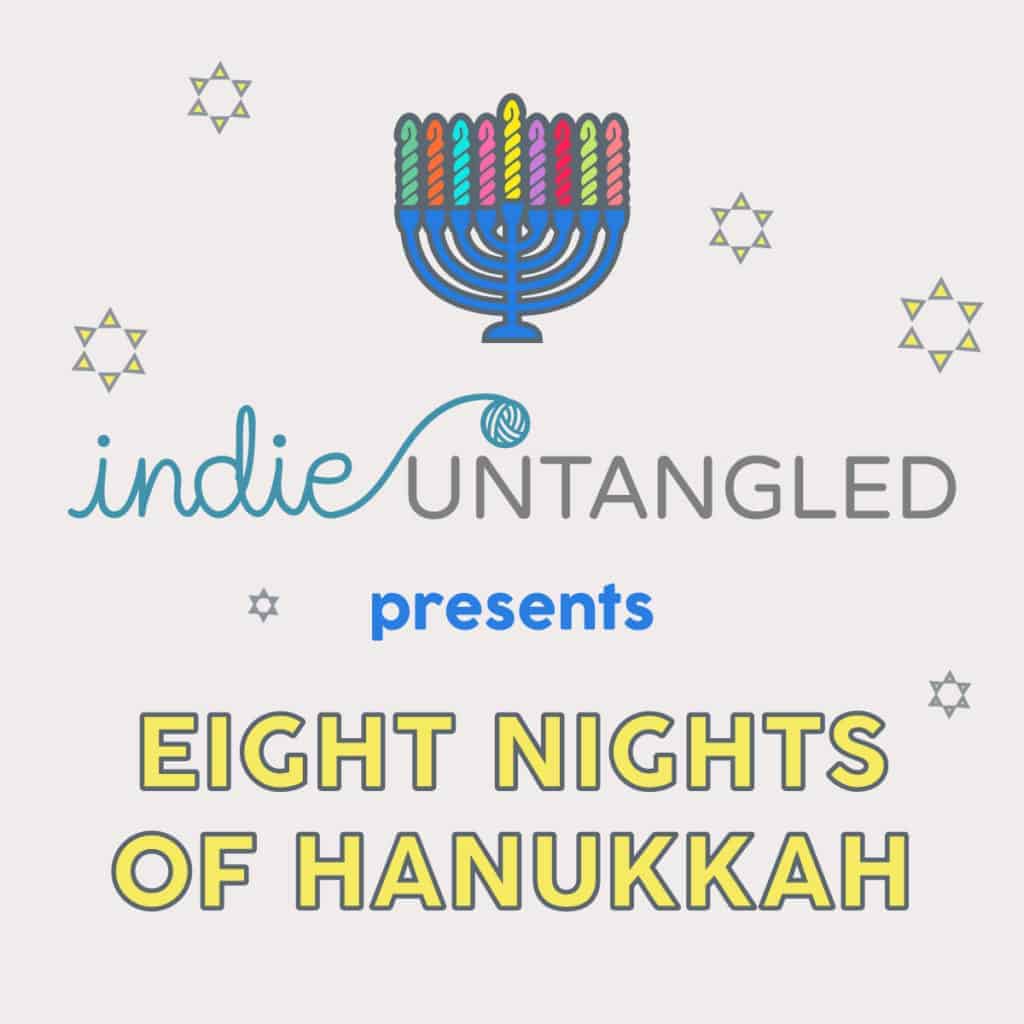 I have fond memories of celebrating Hanukkah as a child, deciding which present to unwrap each night. Should it be the one that I know is a cassette I’ve been lusting after because of how it’s shaped and sounds when you shake it? Or the large package that has to be a Cricket doll?

With that in mind, I was inspired to collaborate with some fellow Jewish fiber friends — Julia of Pandia’s Jewels, Spencer and Reggie of The Fiberists and Raya of Blissful Knits — on an Indie Untangled Eight Nights of Hanukkah Kit! Kits will include individually-wrapped items from all of these folks, plus a few special surprises.

We’re partying like it’s the 5780s with an ’80s-themed palette inspired by the colors in the skein-menorah above. Preorders are limited and open only until November 15. 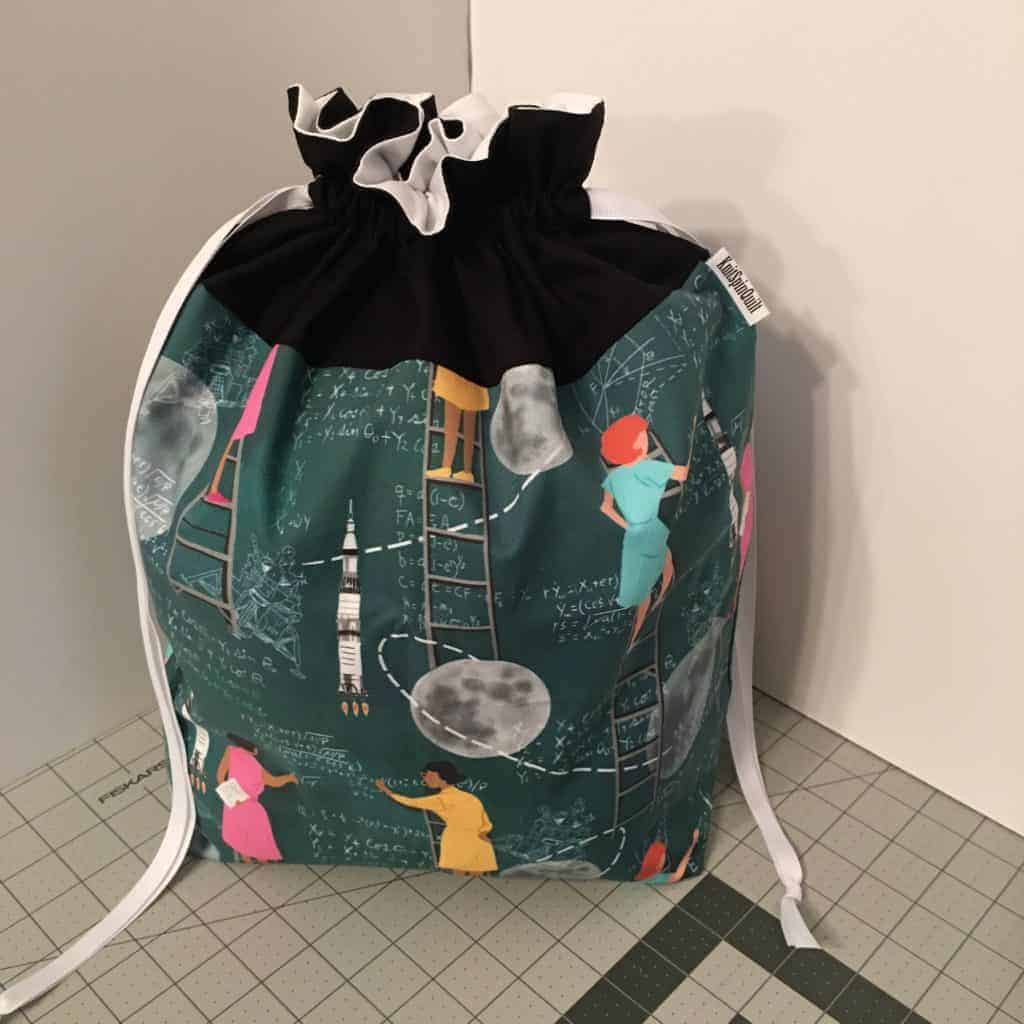 Alisa is back after a semester in England for graduate school and debuted sweater-sized bags at Indie Untangled. They are now available in her Etsy shop! There are both drawstring bags and box bags in a size designed to hold a worsted weight sweater quantity of yarn. As always, Alisa will donate 15% of the sale price to RAICES Texas. 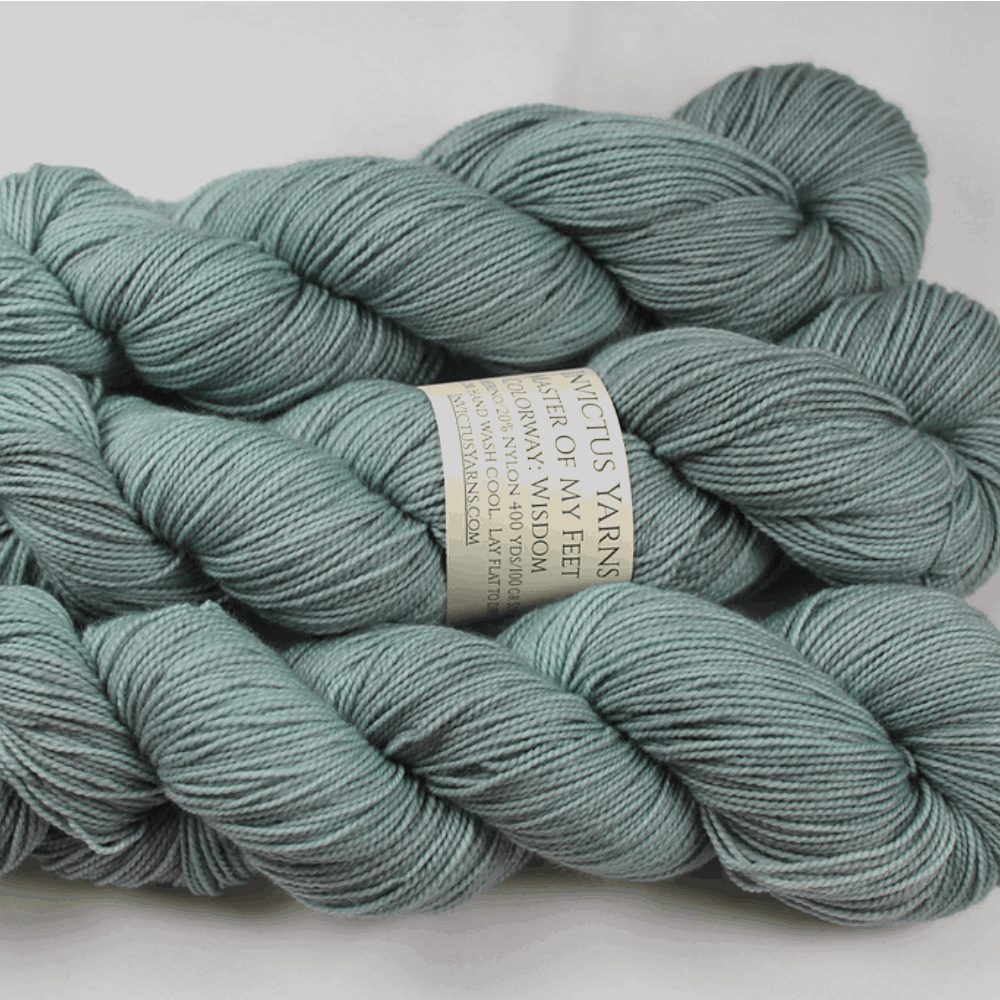 Sue collaborated with designer Adrienne Fong, who recently lost her battle with cancer, on a special colorway called Wisdom. She will be donating $10 for each skein sold to the American Cancer Society in Adrienne’s memory. 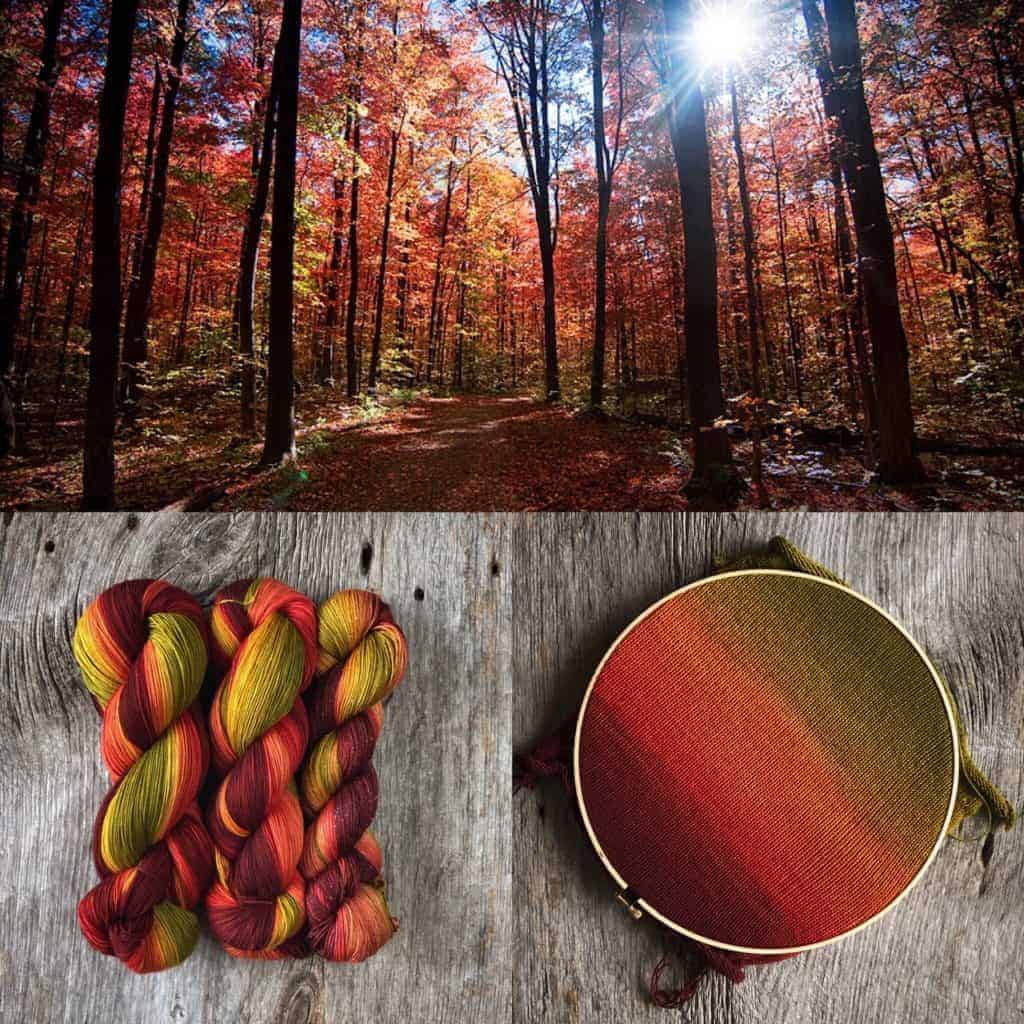 Prior to this year’s Indie Untangled, Shireen of The Blue Brick embarked on a fall ombré colorway, taking inspiration from her own photo of fall foliage to create leaf peeping in yarn form. Autumnal premiered at IU and it is now available on the Indie Untangled website on Killarney Sock (regular and 800-yard Woolly Mammoth) and Manitoulin Merino Sparkle. ⁣

This colorway will also be at the Indie Goes West: Hollywood Edition popup in LA on November 9. 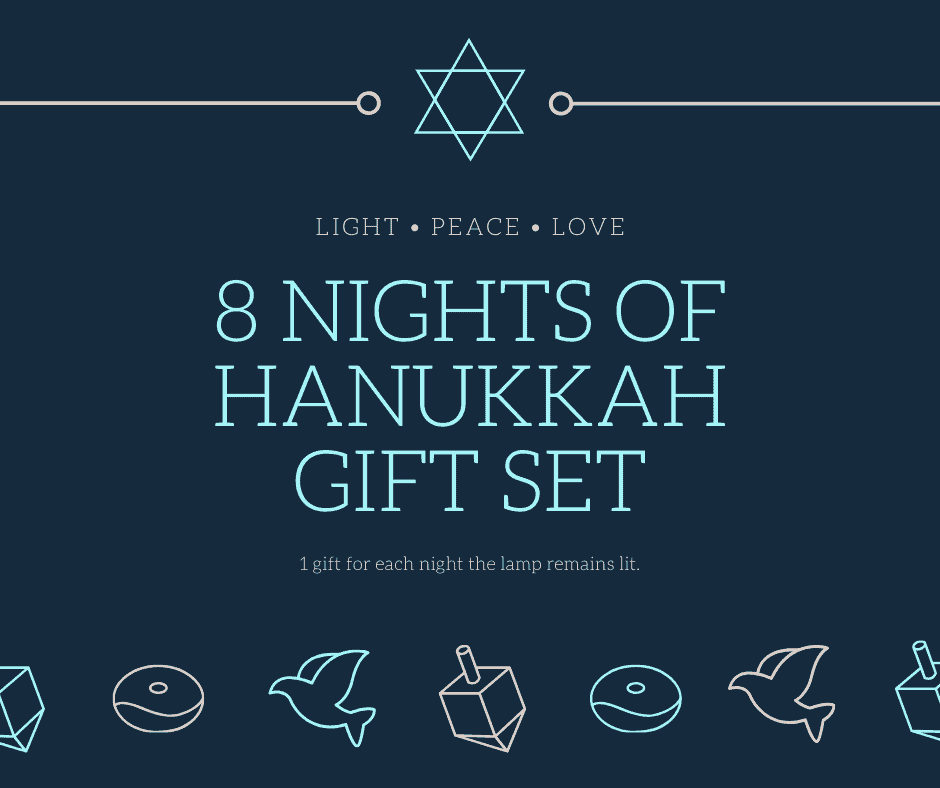 Stephanie of Rock Solid Designs, who creates project bags, is collaborating with other makers for holiday gift sets. Her 12 Days of Christmas and 8 Nights of Hanukkah gift sets include items from Fairy Tale Yarn Co, TurtleMade, One Sock Wonder bags and Me Time Botanicals. Preorders are up now, and packages will ship in late November/early December. 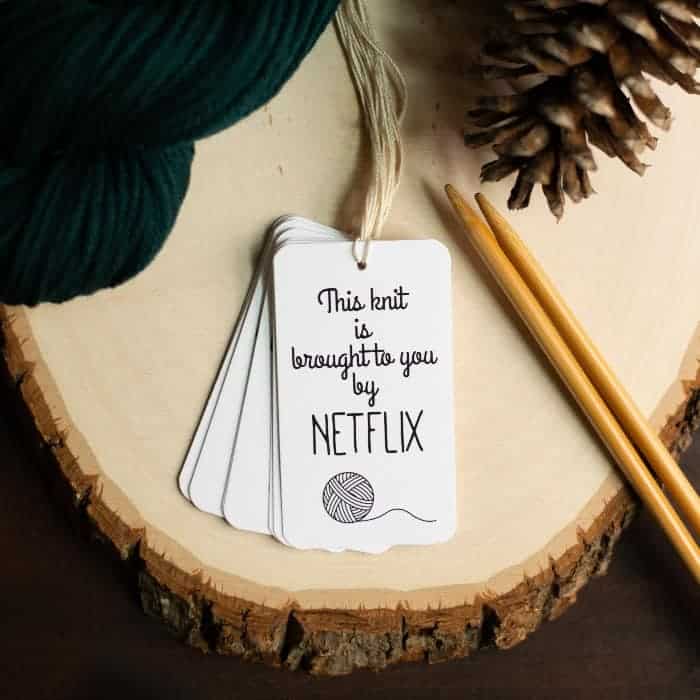 Augusta of adknits just had a shop update filled with gift tags and festive stitch markers for your holiday knitting, new notecards and the latest sticker in the Knitional Park Series. 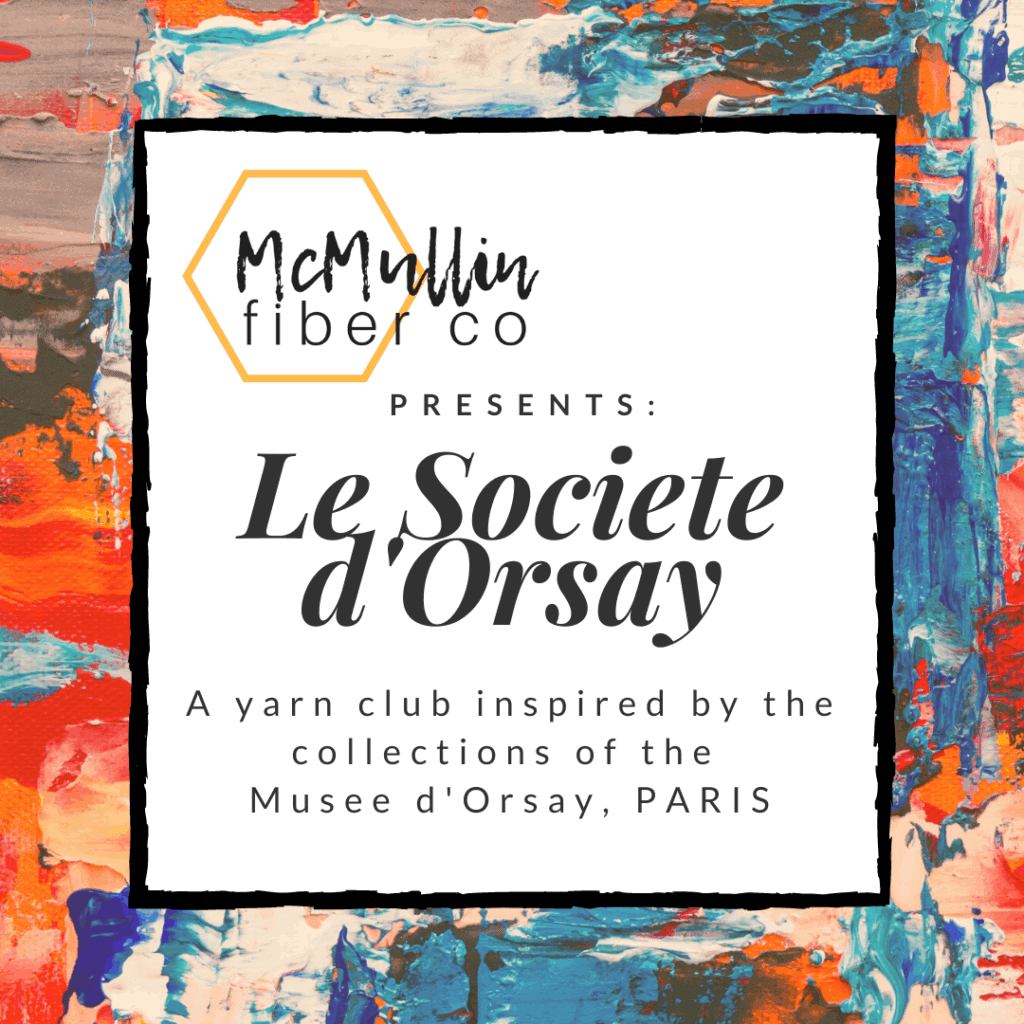 Kate has opened sign-ups for her Le Societe d’Orsay, a yarn club where each month’s colorway will be inspired by art from the Musee D’Orsay in Paris. She is also once again celebrating Socktoberfest with some amazing giveaways and a 24% off sale. 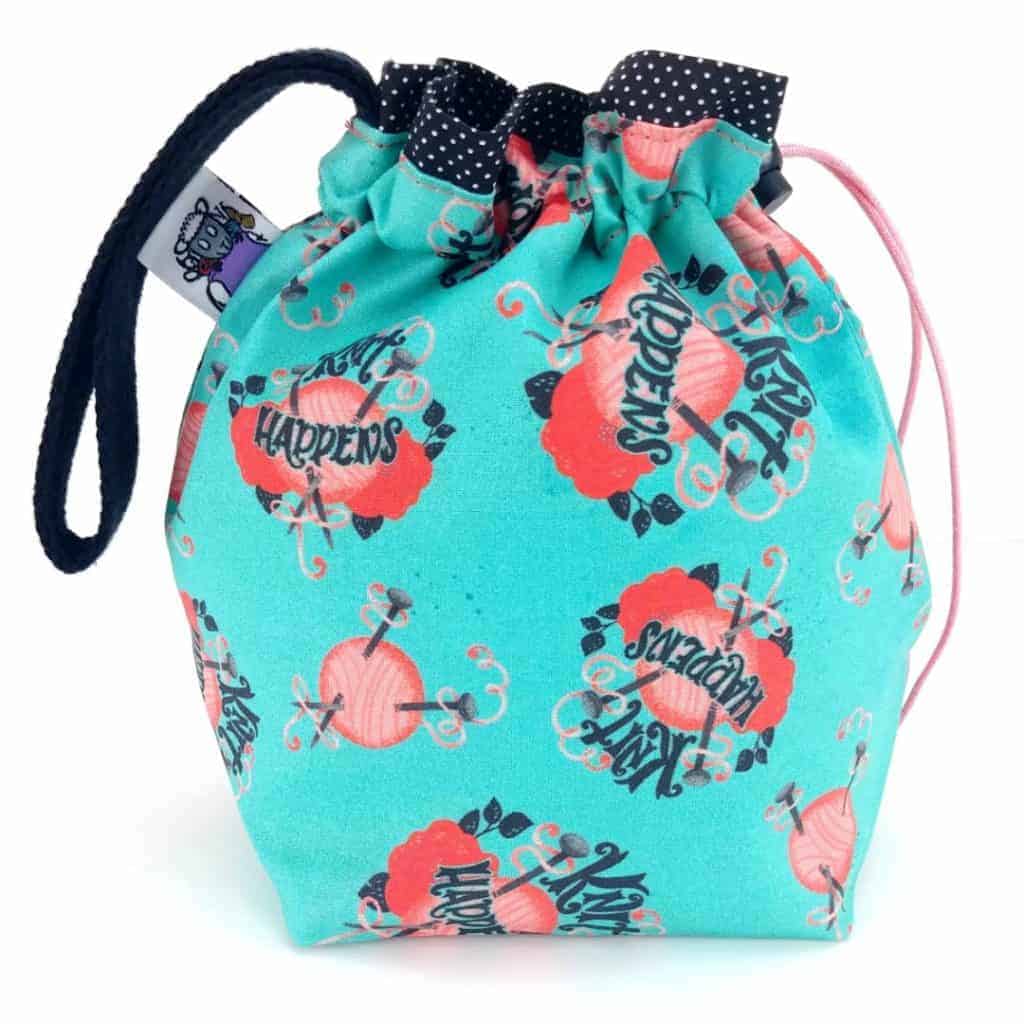 Laura is once again collaborating with artist Cynthia Frenette on some knit-centric items! Orders open today at 9 a.m. Pacific time and close on Monday at midnight. 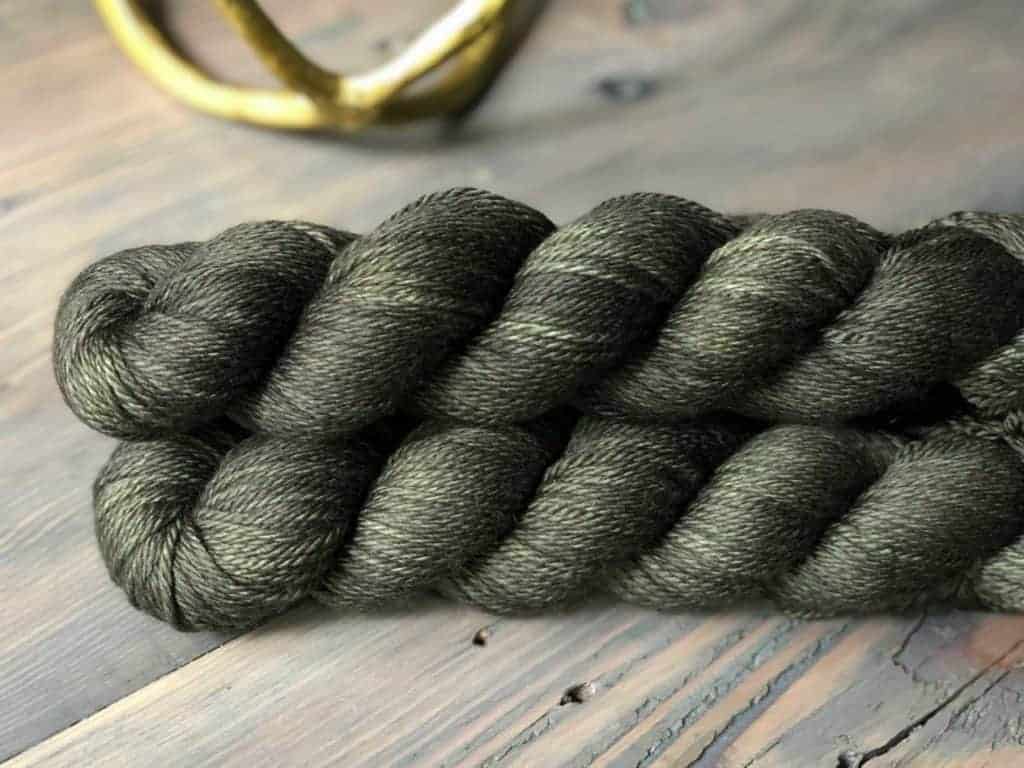 Have you decided what to wear to Indie Untangled and Rhinebeck yet? You’ve got plenty of time — at least that’s what I’m telling myself since I want to knit three sweaters! — but if you want more instant gratification there’s still some of Aimée’s Indie Untangled exclusive Kingston and Hudson colorways on Merino Aran in the Indie Untangled shop. If you’re the ambitious type, I’m also taking preorders for the colorways on her Merino DK and Super Sock bases to ship in September. 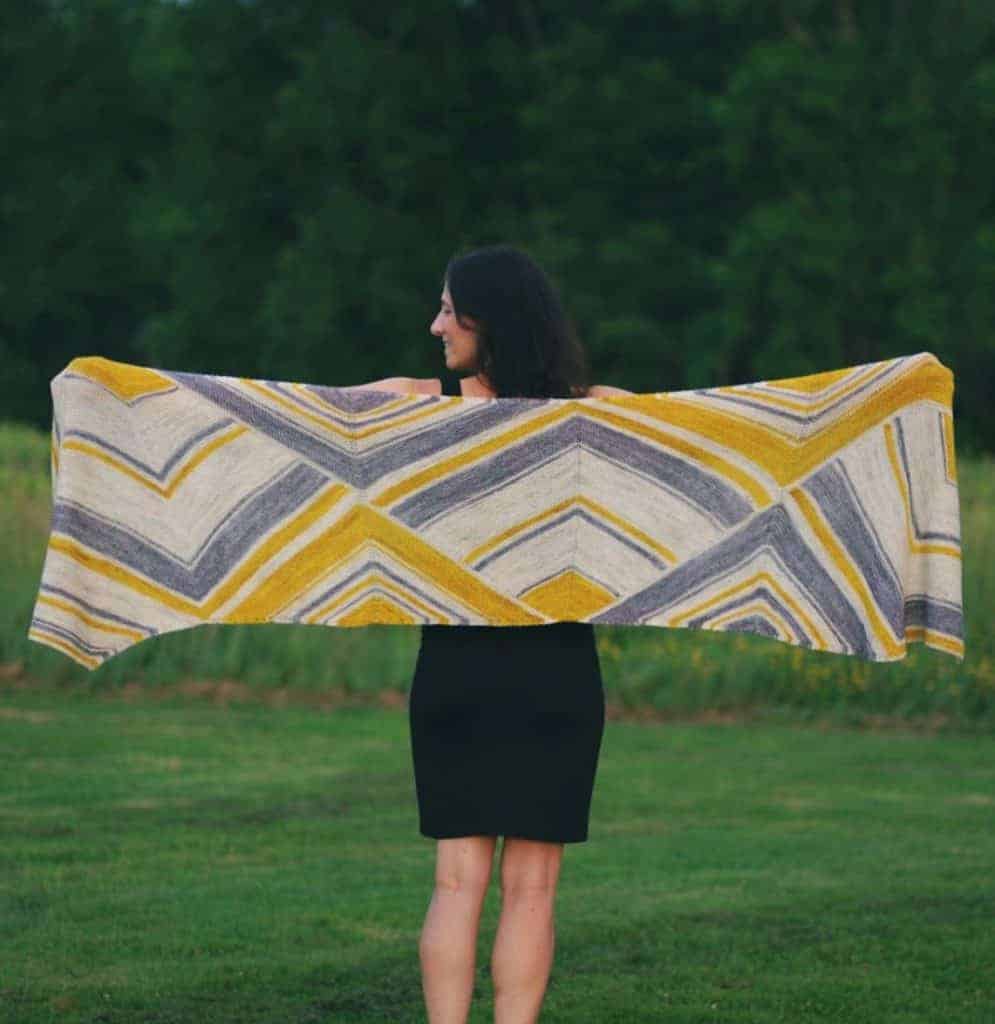 Mary Annarella’s latest shawl, Square Root, looks complicated, but it’s actually the perfect summer vacation knitting — a completely seamless shawl in three colors that begins with three separate squares that are gradually connected to each other. It’s also 30% off with the code takethesquareroute through July 22. 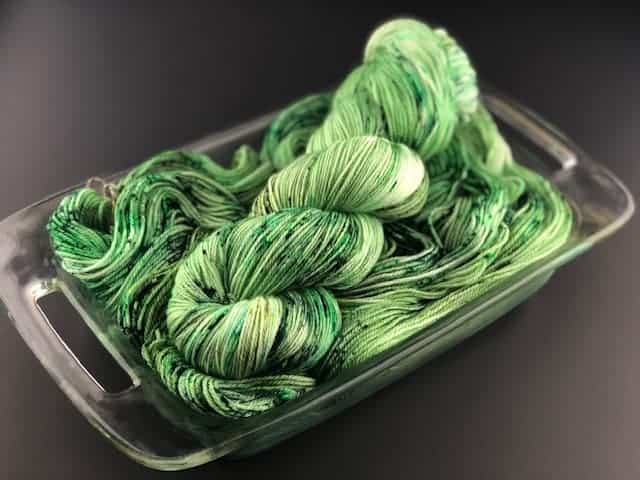 Liz of HighFiberArtz is getting ready for cooler weather with some new colorways and kits, including the Spooky Donuts Halloween Kit and the 12 Days of Seuss Winter Holiday Kit, which include goodies from two other makers, Charmed and Dangerous and One Sock Wonder Bags. 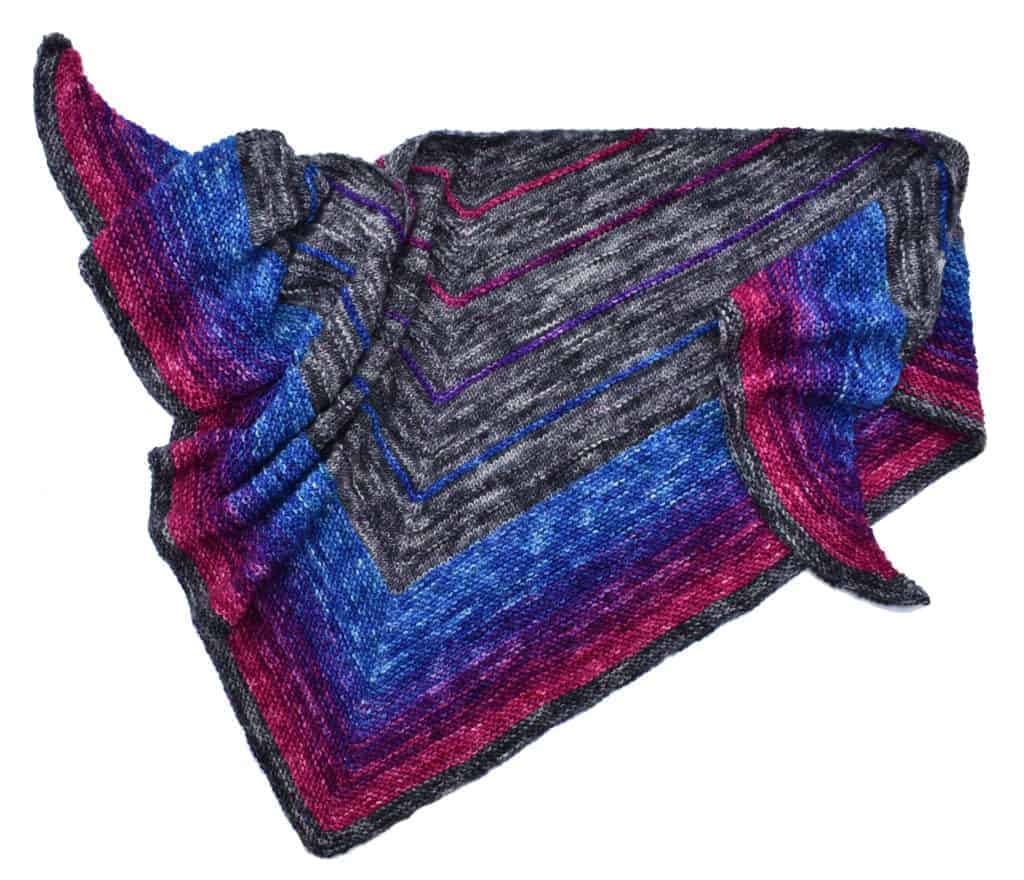 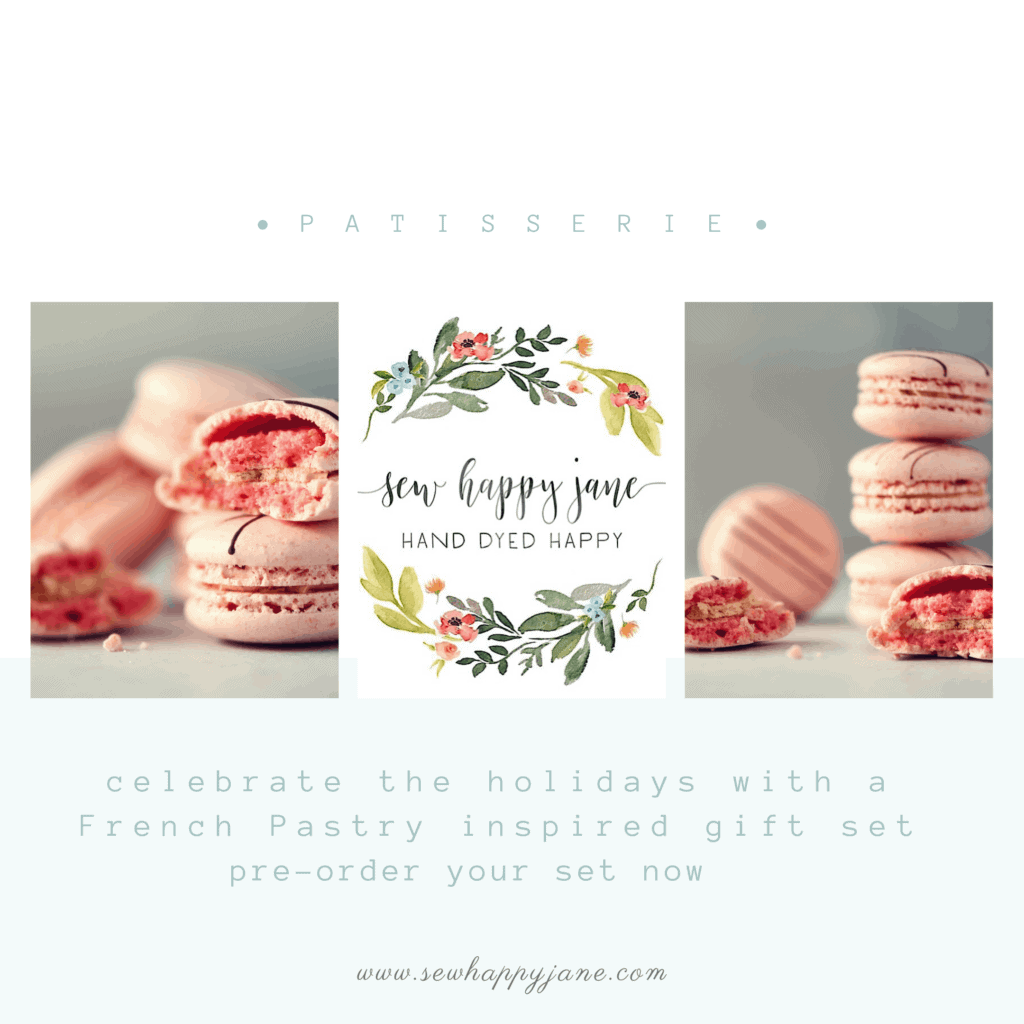 Heather of Sew Happy Jane’s delicious 2019 Holiday Gift Sets are inspired by the patisseries of Paris. Both Hannukah and Advent sets will be available today on her website. 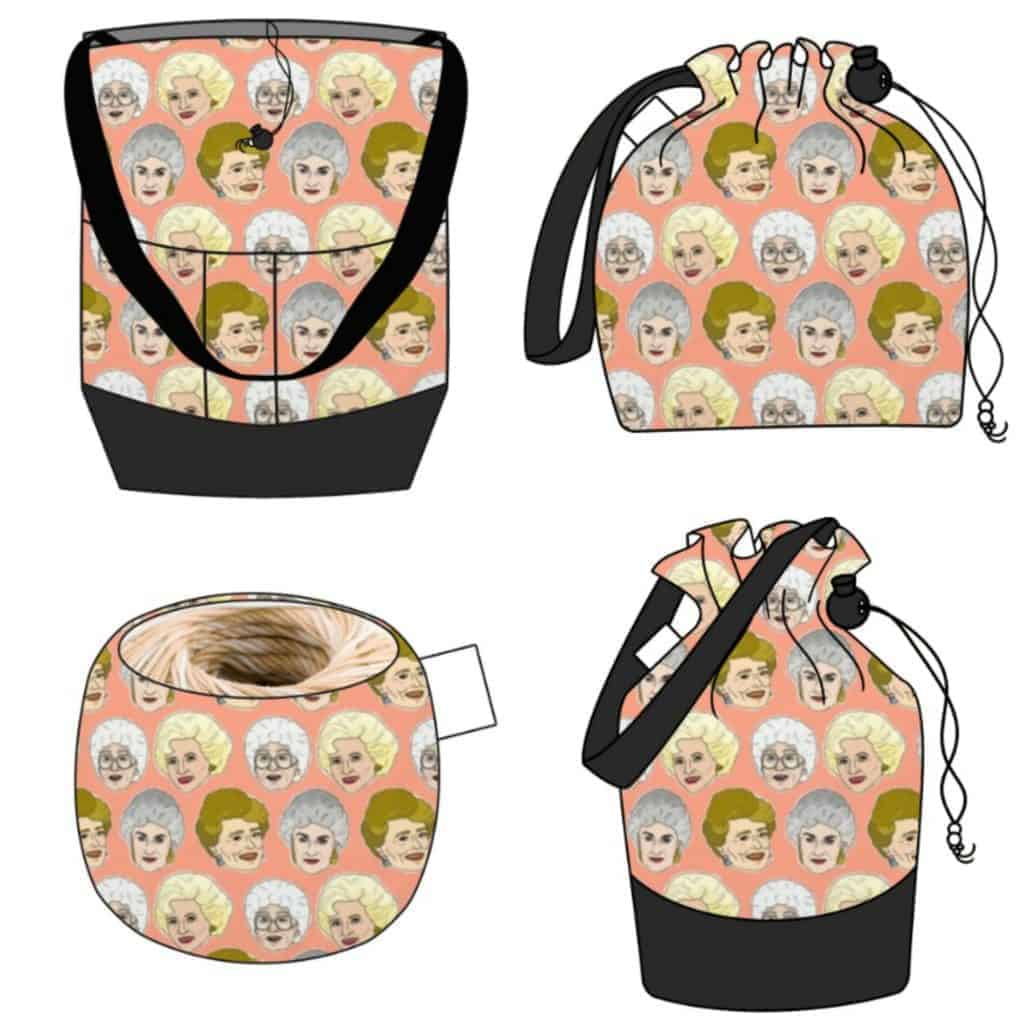 For the latest Slipped Stitch Studios update, which goes live today at 9 a.m. Pacific, Laura’s making you choose: Friends or Golden Girls? (That’s easy: Sofia, Dorothy, Blanche and Rose!) In a fun twist, every order of a Friends or Golden Girls item is a vote and Laura will announce on Tuesday who the winner is. Everyone who ordered an item from the winning team receives a free gift! 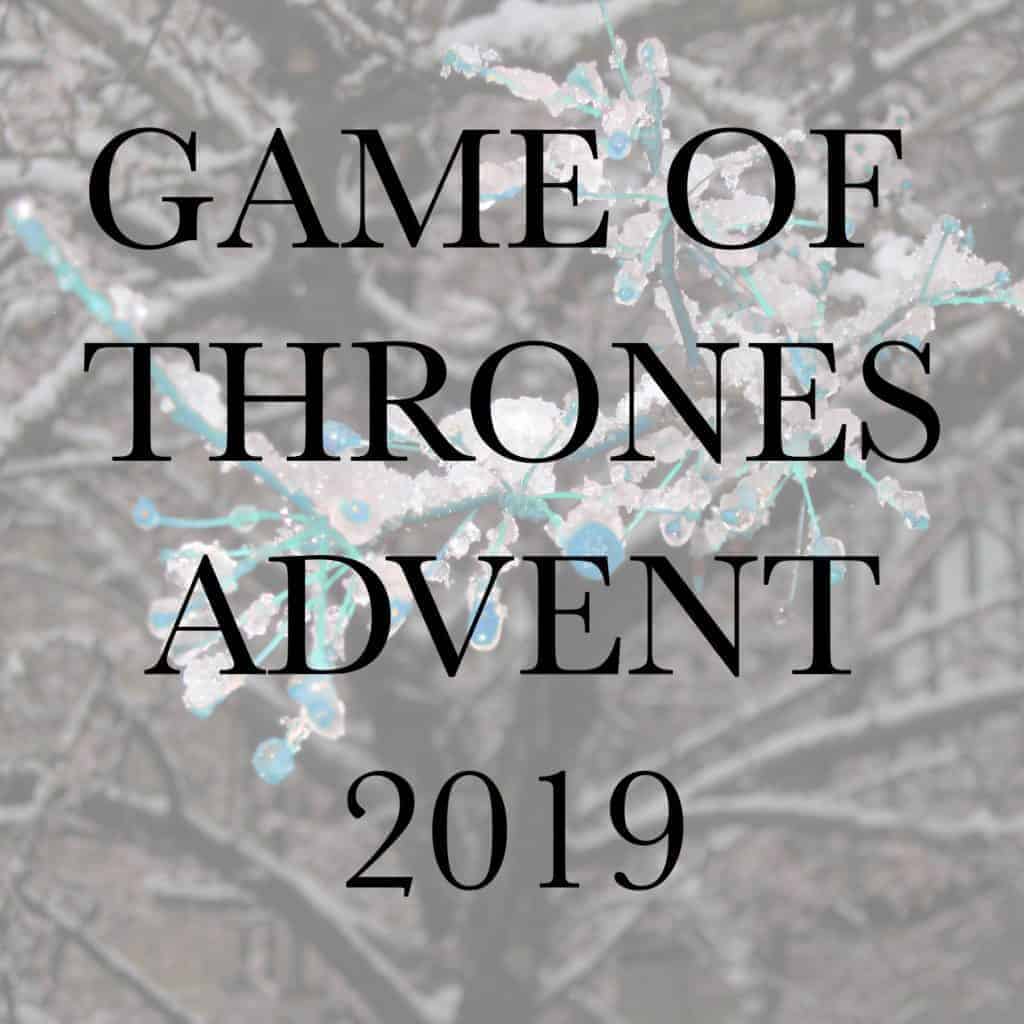 Winter holidays are coming and Marietta of Inner Yarn Zen has Game of Thrones and Outlander Advent calendars and Hanukkah sets available for preorder. Kits include 24 mini skeins, a themed project bag and other surprises sprinkled throughout. 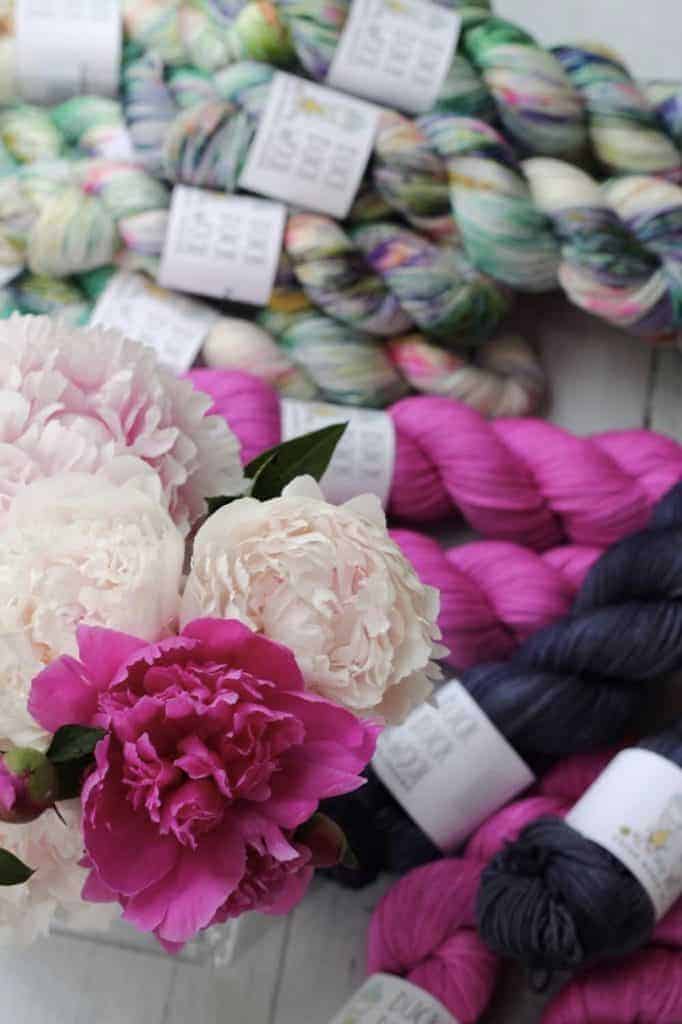 I’m giving Sandra of Duck Duck Wool back her Glacier National Park-inspired yarn for her to bring to a trunk show, so if you don’t want to miss out on Glaciers & Wildflowers or her new Night Hike, grab them by Sunday, when they’ll be gone from the shop forever! 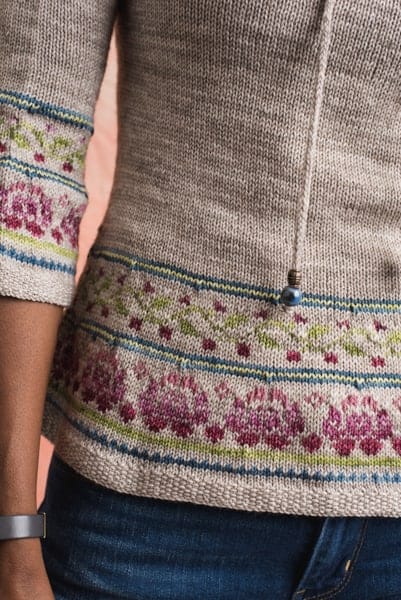 Mona’s Frida Kahlo-inspired For Frida pattern, originally published in the February 2019 issue of I Like Knitting magazine, is now available for individual sale in her shop. Enjoy 25% off the pattern through July 24, no coupon code needed. 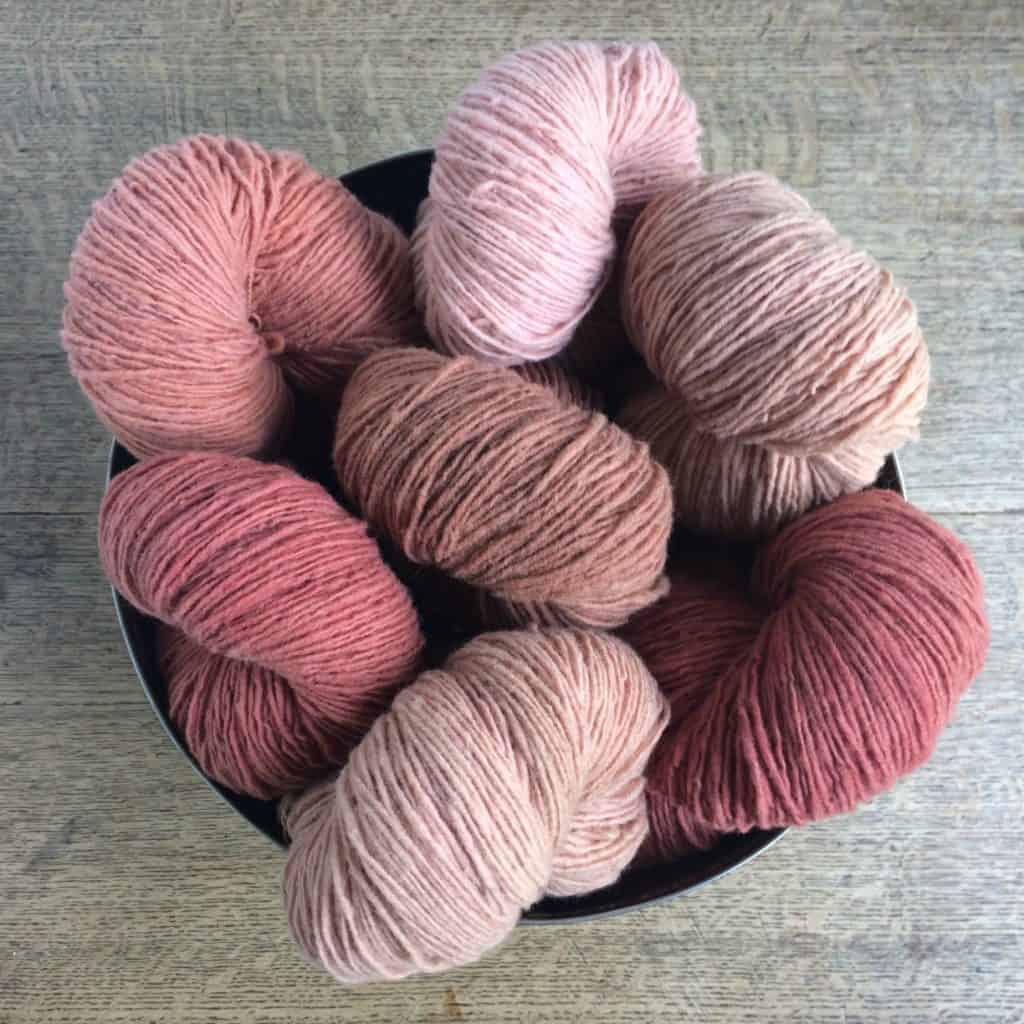 Seathra of Stravaigin Yarn Co. dyed up some summer-inspired colors using Quebracho Red, Cochineal and Hibiscus. They are dyed on her Auchentoshan (OKH-en-TOSH-en) base, a 100% Canadian Rambouillet yarn that hails from the fields of Alberta.