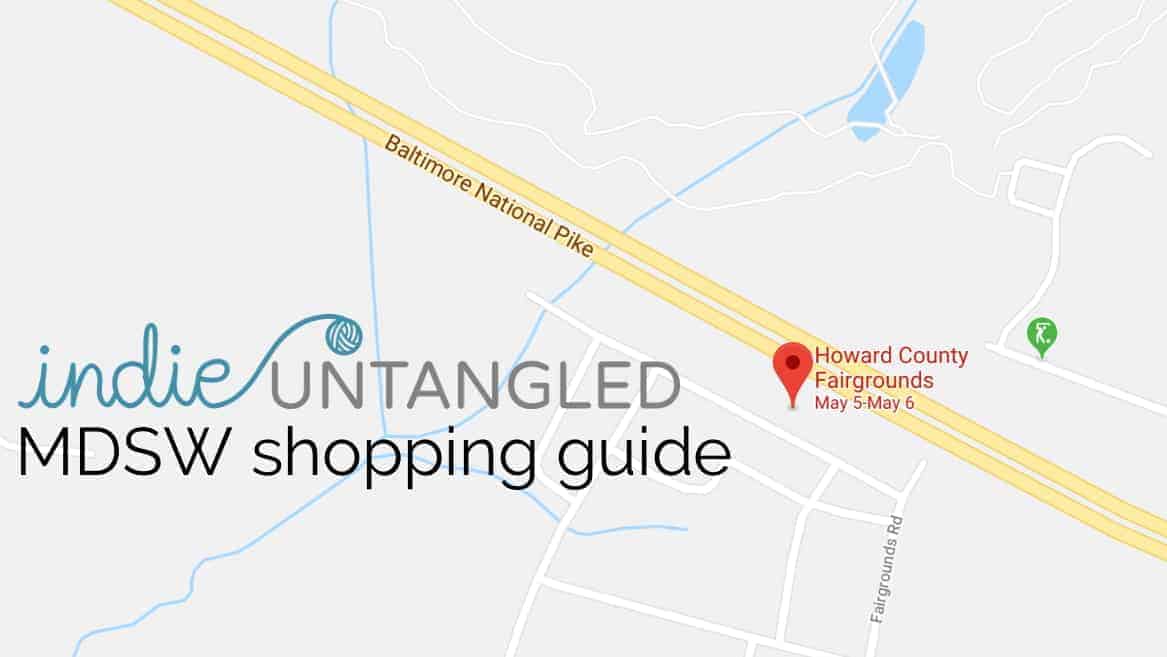 I’ve always thought of the Maryland Sheep and Wool Festival as the more low-key fiber festival. Aside from the fact that I’m not organizing a massive Friday trunk show (I leave that to Cathy and Heather, the owners of The Knot House), there’s no “Maryland sweater” to knit because it’s usually not sweater weather, last year being the exception.

However, as I’ve been putting together the shopping guide for the weekend, I’ve realized that the stashing temptation is anything but low key.

Here’s a roundup of the Indie Untangled vendors at both the pop-up at The Knot House and the Howard County Fairgrounds, and a peek at just some of the goodies they’ll be bringing.

I plan to be at the festival on Saturday, sporting a new shawl by Deb Gerhard that she designed with Into the Whirled’s Bryce Canyon-inspired Knitting Our National Parks colorway, which you can see below. I’ll be at the ITW booth at 12:30 p.m. for an Indie Untangled meetup, and you can see the yarn and the design in person. Hope to see you there!

This is the fourth-annual indie pop-up that Cathy and Heather are throwing. In the spirit of the Indie Untangled Rhinebeck Trunk Show, it brings together a collection of dyers and makers from around North America. Unlike the IU Rhinebeck show, it runs all weekend, with a preview party on Friday night from 5 to 9 p.m. 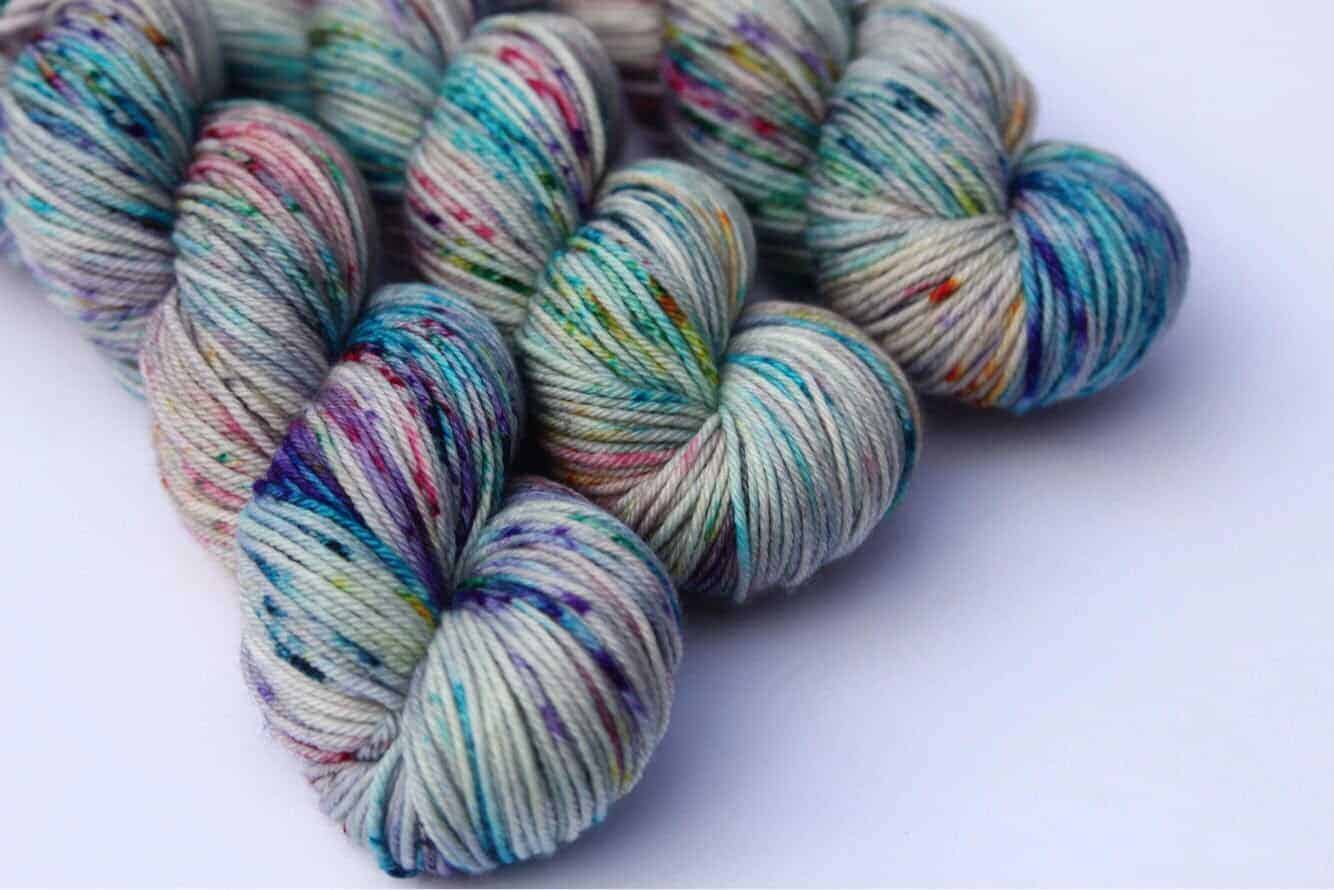 Sandra, who is based in nearby Virginia, will have some of the Indie Untangled Knitting Our National Parks colorway, Glaciers and Wildflowers (pictured above), on hand, along with her famous speckled skeins. 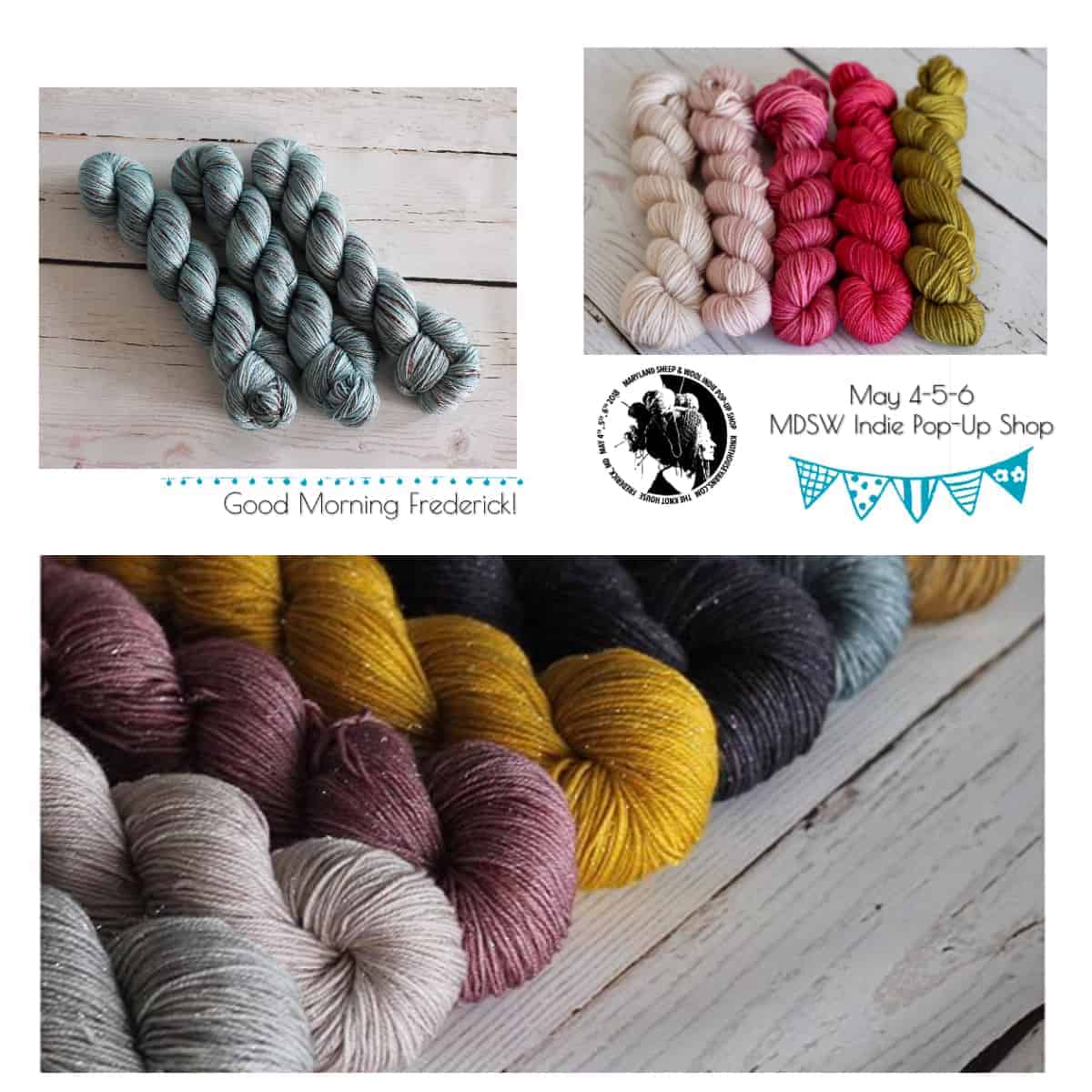 Julie hails from Montreal, with a beautiful palette of dreamy semisolids and subtle speckles. 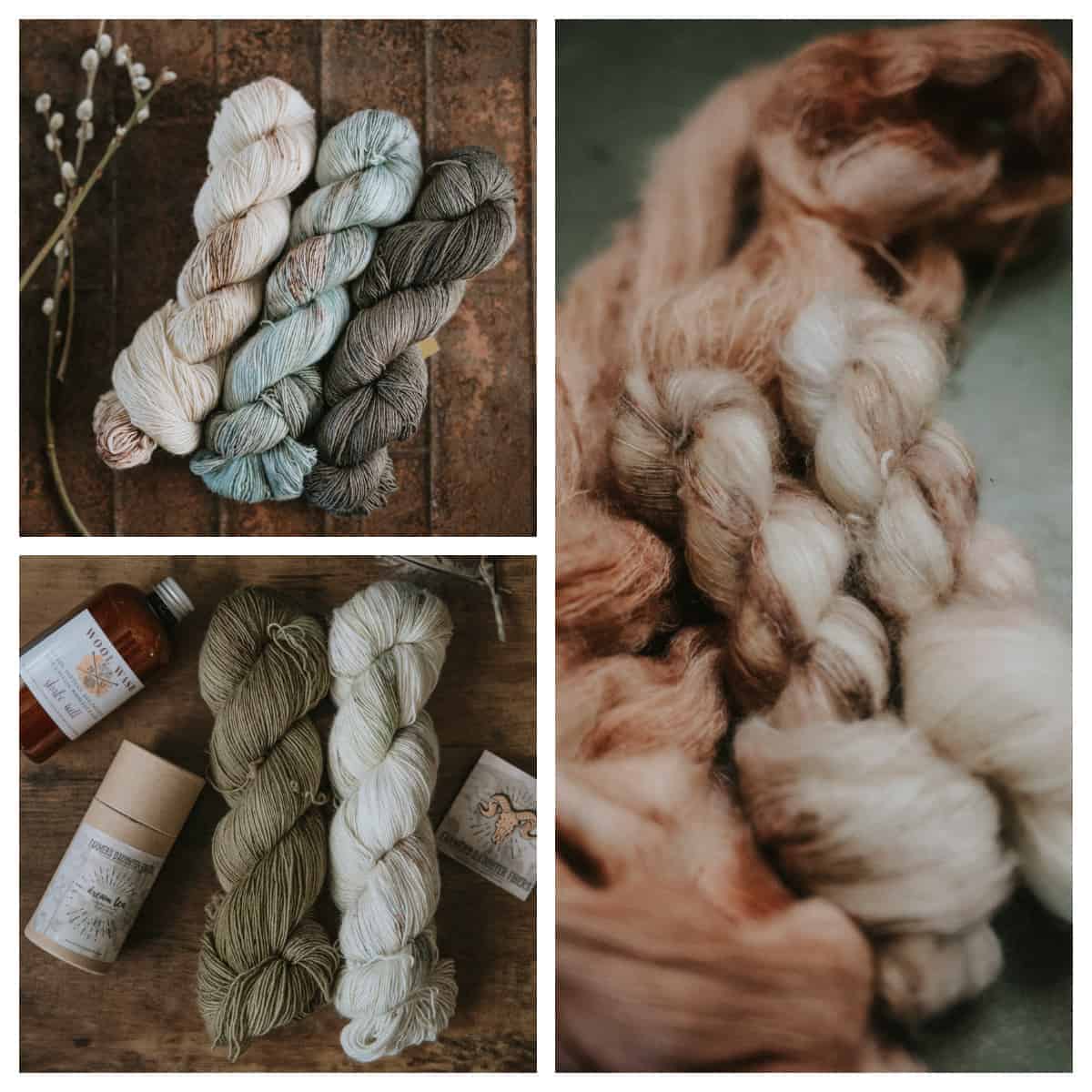 Candice will be coming to the show all the way from Montana, bringing her soft, Western-inspired colorways.

Pictured clockwise from the top left are Half Breed, Heartbreak Hotel and Paul Newman in Foxy Lady (70% Merino/30% silk), Monarch in Mighty Mo (70% kid mohair/30% Mulberry silk), and Gary Cooper and Are You Sure Hank Done It That Way on Foxy Lady. 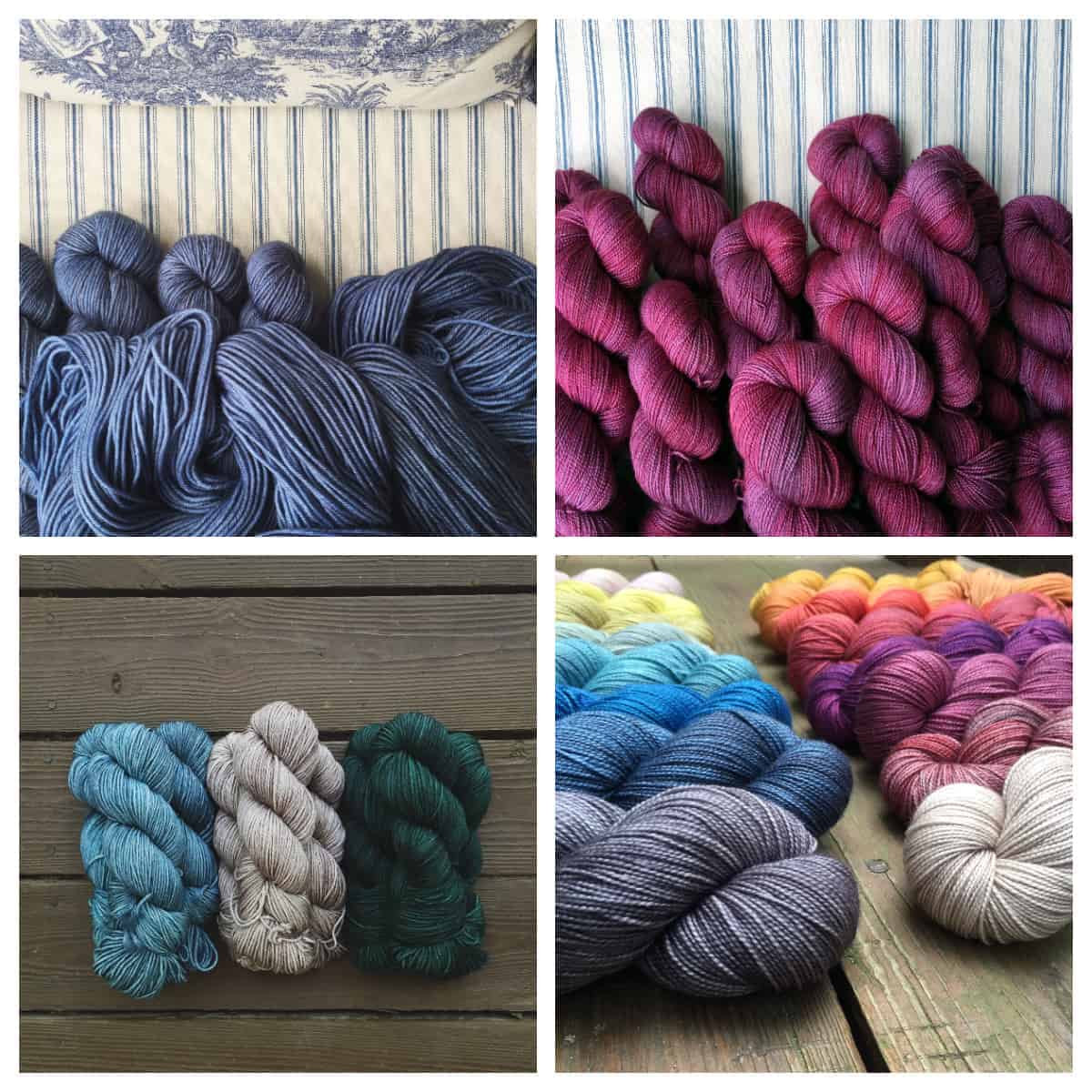 Aimee is another Virgina-based dyer, known for her beautiful semisolids. 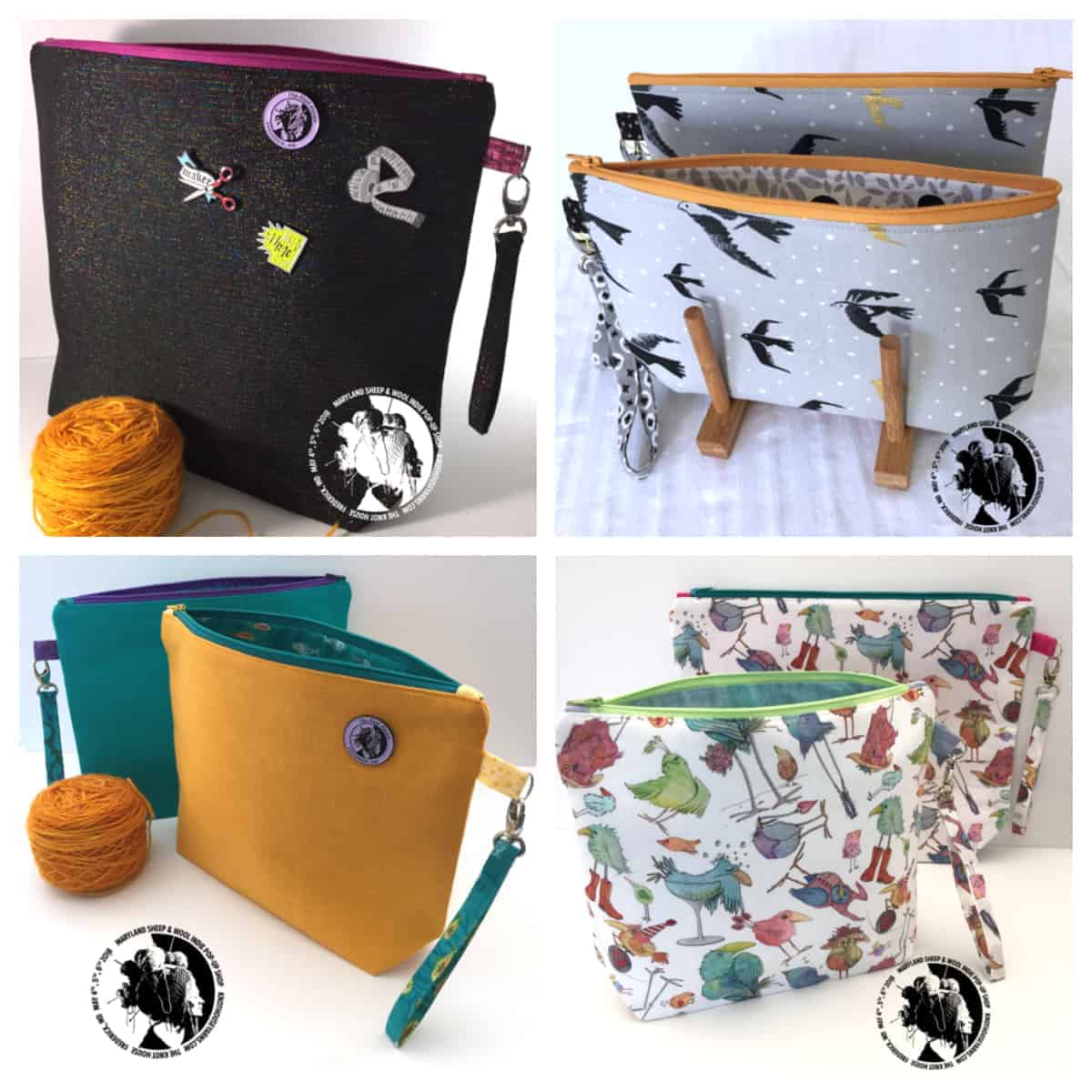 Vicki sews her adorable and functional project bags in Maryland. She will bring a variety of zipper bags, including some made with a sparkly linen fabric that is perfect for showing off your fiber flare.

There will also be yarn from South Carolina’s Autumn and Indigo, Connecticut’s Nice and Knit, Periwinkle Sheep from Albany, N.Y., and Swift Yarns from New York City. 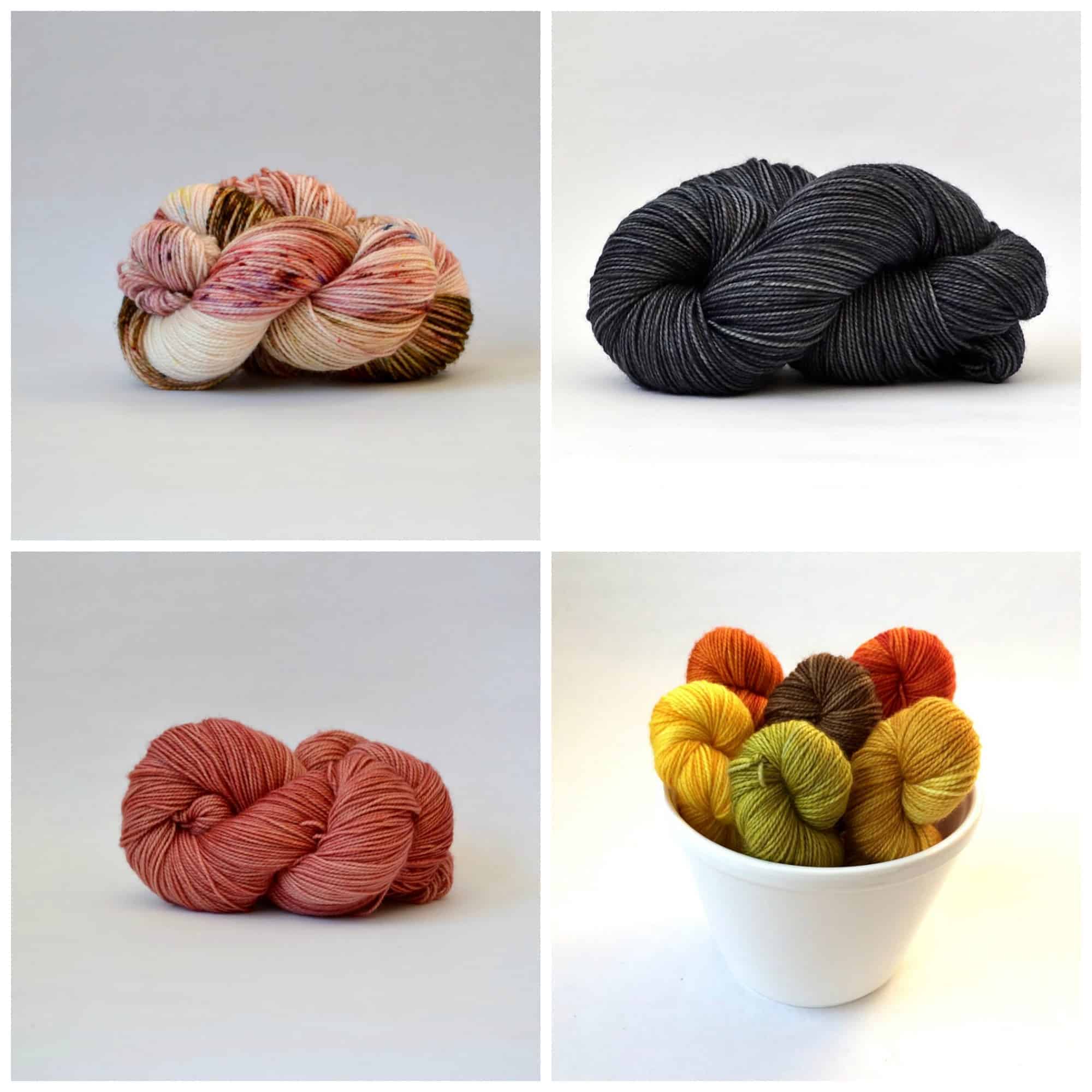 Alice, who is based in Silver Spring Maryland, will be bringing her popular semisolid and speckled colorways and mini-skein kits. 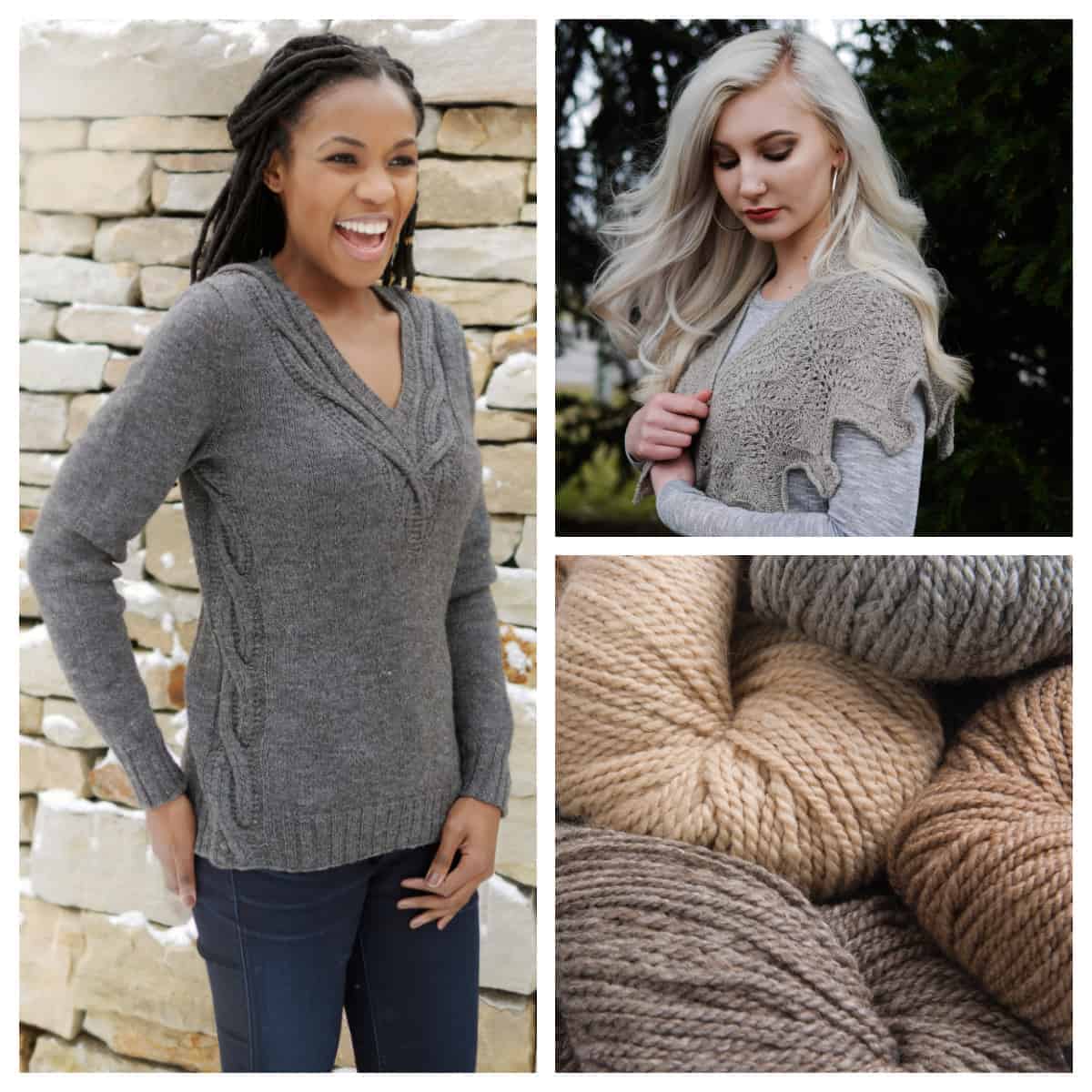 Famed designer Anne Hanson will be bringing stunning samples made with her line of custom-milled yarns that show off the natural creams, browns, and greys. 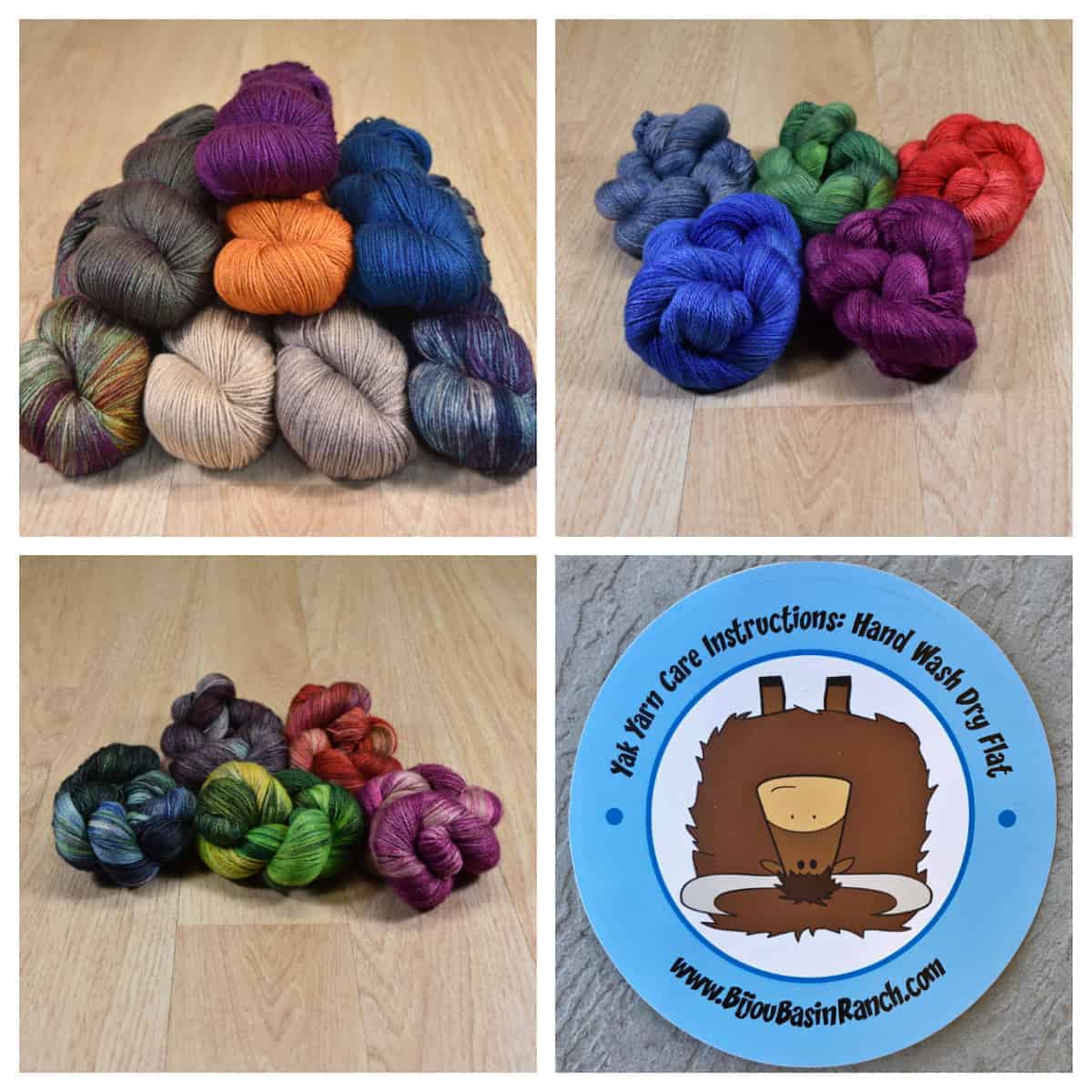 Based in Colorado, this mom and pop operation specializes in yak blends and in the last few years they have begun collaborating with indies on hand-dyed colorways.

Pictured clockwise from the top left are the Gobi base (baby camel and silk) in the Valkyrie-inspired hand-dyed colors, Shangri-La Lace (50/50 yak and Mulberry silk) in the Explorer collection, new stickers that they will be handing out, and variegated Shangri-La Lace. 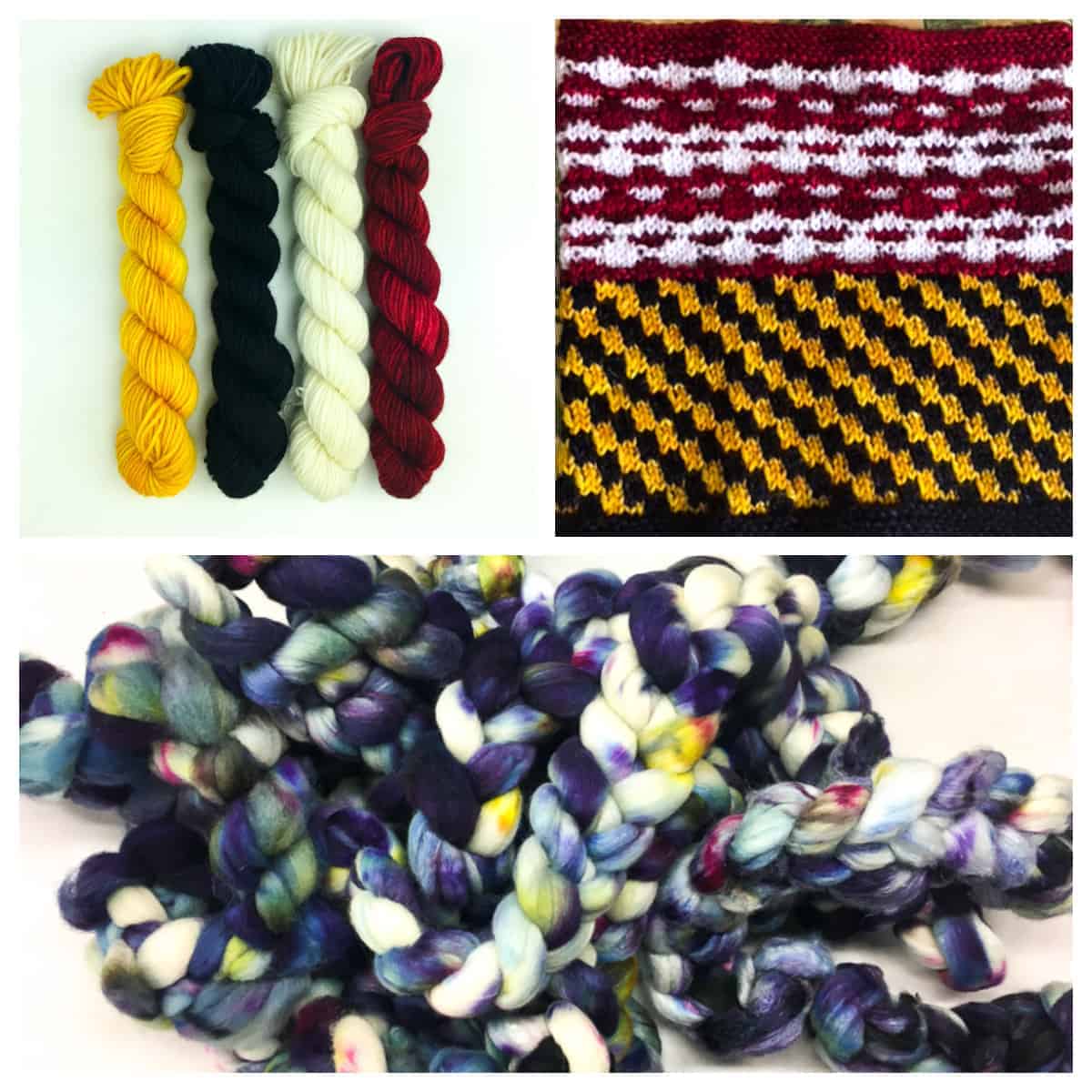 Also from Maryland, Kate and her crew are MDSW veterans, bringing a huge selection of colorful yarns.

Pictured above is the Maryland Mini color pack and Andrea Medici’s Calverts and Crossings Cowl, along with Dragonfly’s show exclusive colorway Boardwalk Lights, named after Ocean City, Maryland, at night.

Shepardess Katrina Updike has been raising British and rare breed sheep, including Blue-Faced Leicester, Gotland, Leicester Longwool and Teeswater, for the past 18 years on a farm in Pennsylvania. 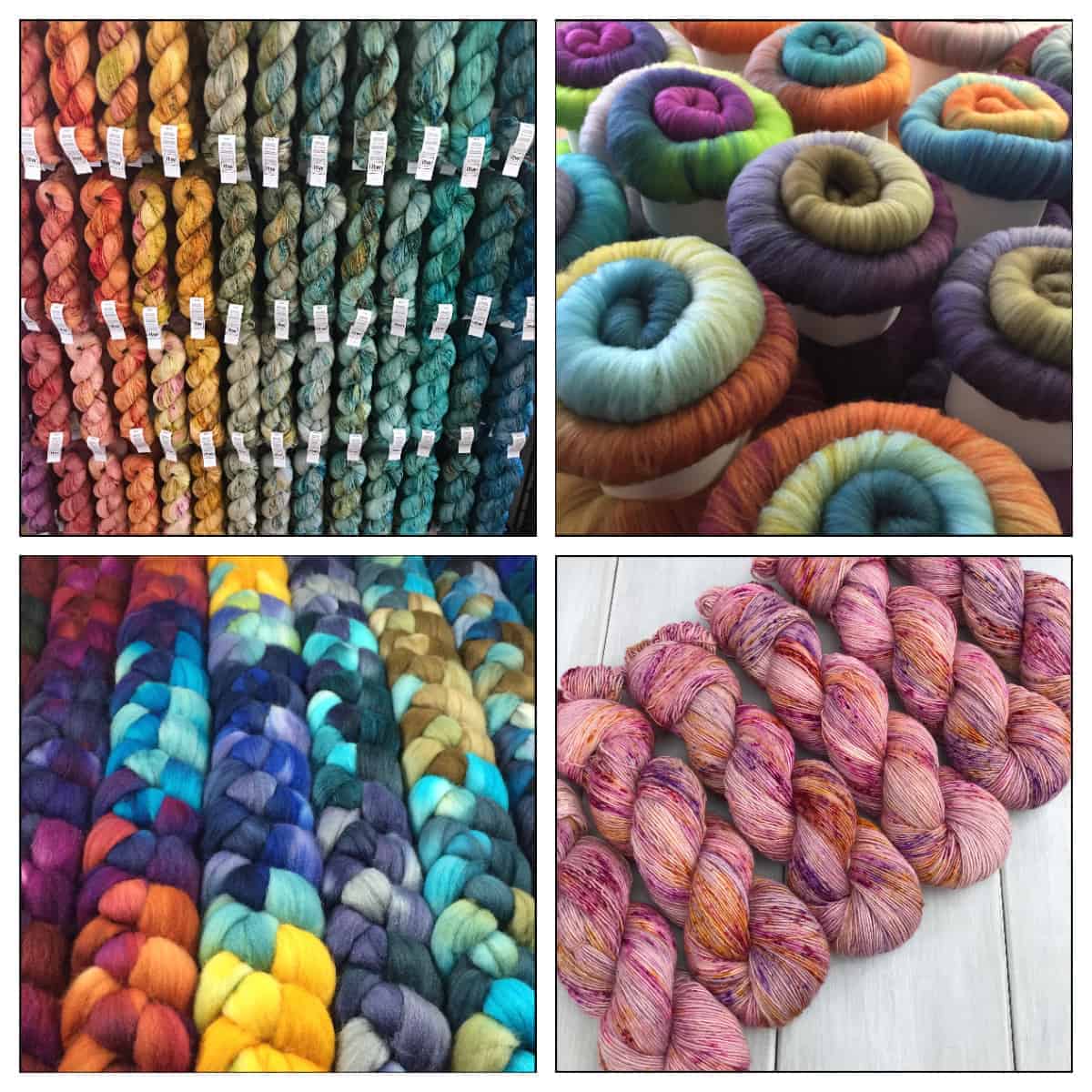 New York-based dyer Cris is known for her semisolid and variegated colorways, and she has recently moved into speckles, including her colorway for the Indie Untangled Knitting Our National Parks series. 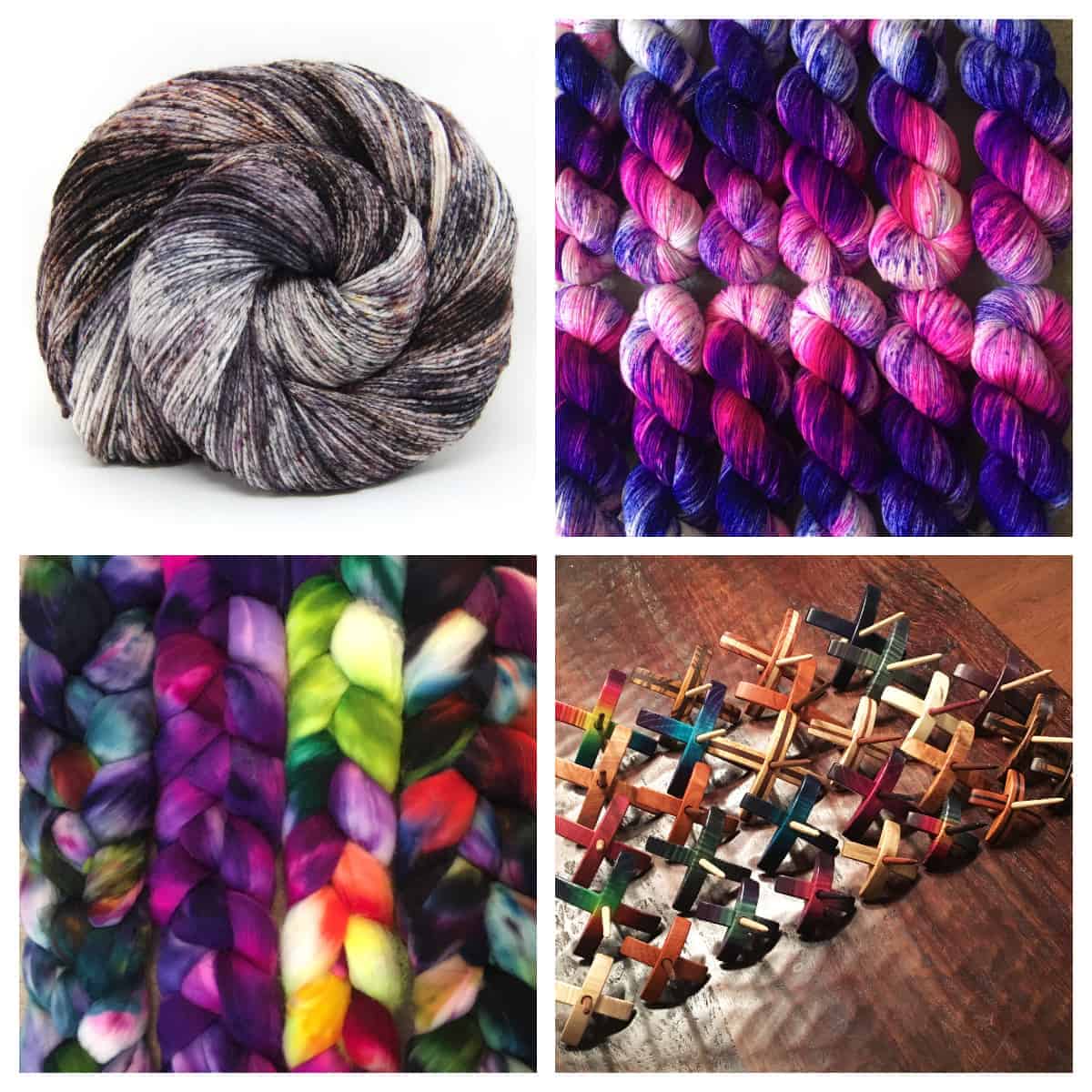 Sarah, who is based in Georgia, is known for her eye-poppingly bright colorways. Aside from yarn and fiber she’ll also be bringing Turkish spindles made by her husband under the name Subterranean Woodworks.

Pictured clockwise from the top left are new colorways Smoky Quartz and Neon Lotus, along with the spindles and fiber braids. 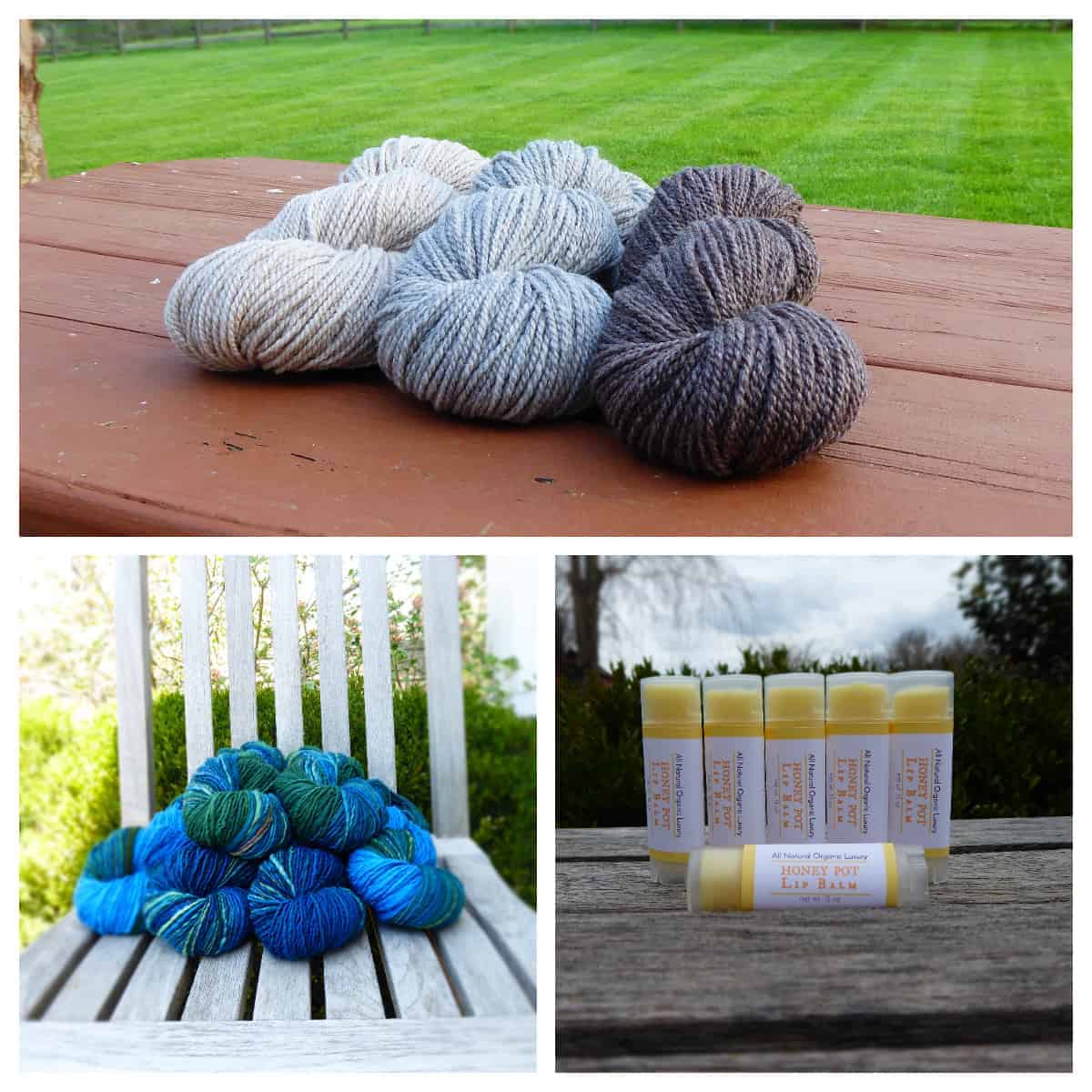 Anne offers yarn blends made with the fiber from the sheep on her New Jersey farm as well as stunning handspun. At the festival, she’ll be debuting her Vintage No. 4, organic Polwarth coordinating sets, and lip balm. 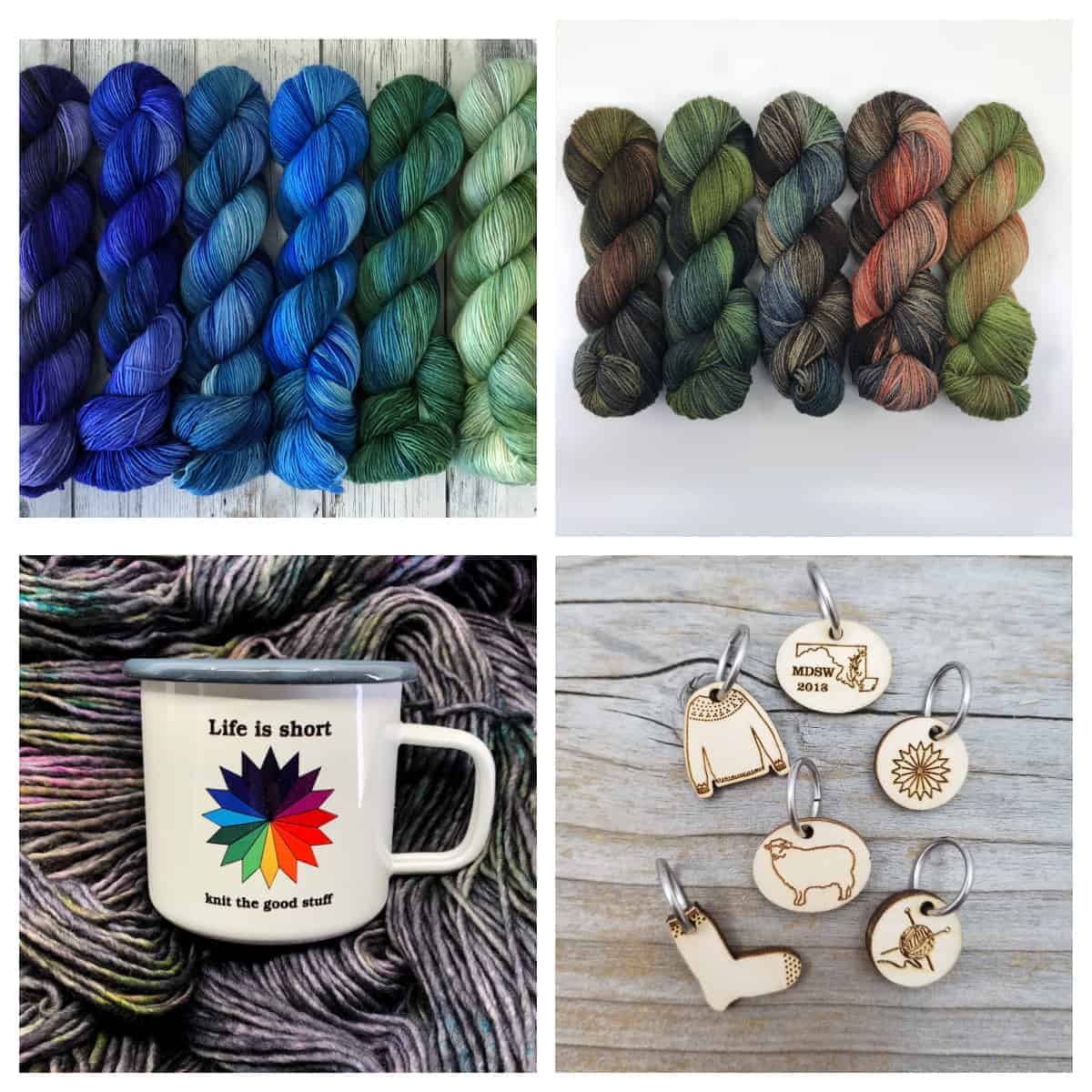 Jennifer, another Virginia-ite, is a master of dyeing a variety of colors on both rustically sheepy and luxurious silk bases.

You can see more goodies in Jennifer’s sneak peek post.

Here are some other vendors I’m looking forward to visiting:

This is the sixth in a series of blog posts featuring the fabulous sponsors of the 2017 Rhinebeck Trunk Show.

Earlier this year, Cathy Baucom and Heather Tinney, the owners of The Knot House, a fabulous LYS in Frederick, Maryland, launched a knitting podcast. They broadcast from their shop, which features yarn from several dyers, including many who post on Indie Untangled. I asked them to do a little preview of the trunk show: 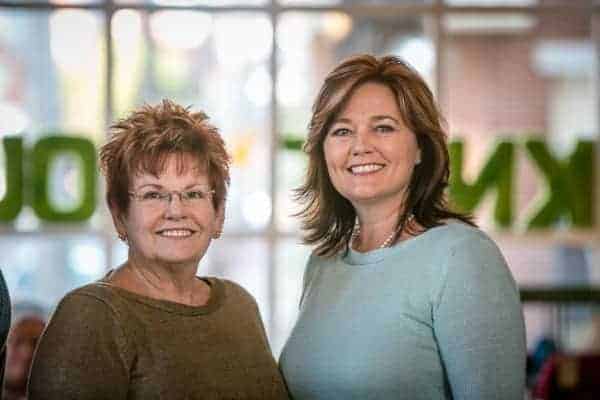 This is the second in a series of blog posts with the generous sponsors of the 2016 Rhinebeck Trunk Show.

I first learned about The Knot House in Frederick, Maryland, when Dami of Magpie Fibers began posting to Indie Untangled, and she told me about the amazing yarn shop where she learned to knit and was inspired to start dyeing after seeing yarns from Duck Duck Wool and Western Sky Knits. A yarn store that carried many of my favorite indies? That sounded like a dream come true! In May 2015, I was fortunate enough to get a chance to visit the shop, housed in a beautiful old brick building, when the owners, Cathy Baucom and her daughter, Heather Tinney, organized their first indie pop-up during last year’s Maryland Sheep & Wool Festival.

Heather gave me the lowdown on her and her mom’s decision to open a store devoted to indie dyers and shared their history as makers:

Tell me about the decision to open The Knot House. Had both of you always wanted to own a yarn shop?

No, actually. When we had talked about opening a yarn shop forever ago, we thought the internet would kill yarn shops. Then indie yarns became popular.

Mom was living in Alabama managing a small business for someone. I was and still am working for Motorola Solutions selling public safety communication systems (think radios for firefighters and cops). Anyway, my husband, Paul, asked me to go with him to look at a building that was for sale. He and his business partner were interested in it. It was a hair salon. The natural light was exceptional that day and when I saw the built in bookcases, my head was flooded with yarn shop ideas. It was November of 2012.

It had been three years since Kristi Johnson, owner of Shalimar Yarns, had closed her shop and committed to dyeing yarn. She was a big influence and is still one of our best supporters. Paul finally grew tired of trying to talk me out of it and agreed to the idea (once the building was purchased) under one condition: my Mom (Cathy) had to move here and run the day-to-day operation. I really think he thought we wouldn’t do it… He being the landlord was a challenge. Let me make it clear that we get no preferential treatment! Mom and I were planning on opening in September of 2013, so when he told me they were taking possession of the building in April and we had to sign a lease in May if we wanted the space, things got testy. At the end of May, Mom pulled up in a Penske Truck with all her belongings and we opened The Knot House the fist weekend of July 2013. 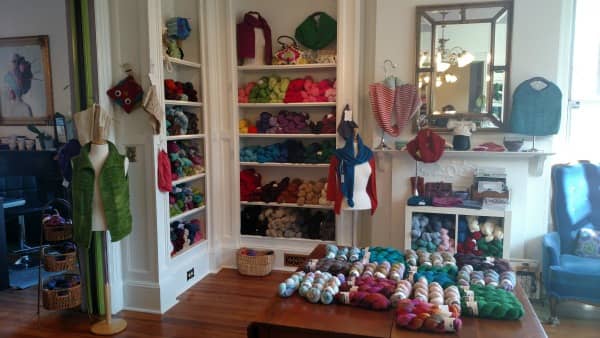 What did you both do before you became yarn shop owners?

Mom managed a pest control company in Auburn, Alabama. I still work for Motorola, so as you can imagine, the shop is a creative sanctuary for me. 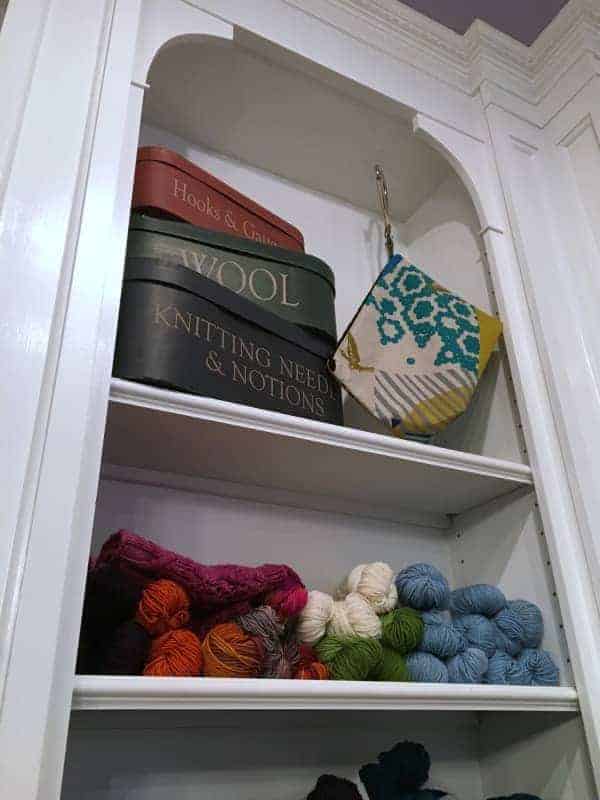 Why did you choose the dyers that you carry?

Easy question. We simply wanted to carry the yarns we wanted to knit with. 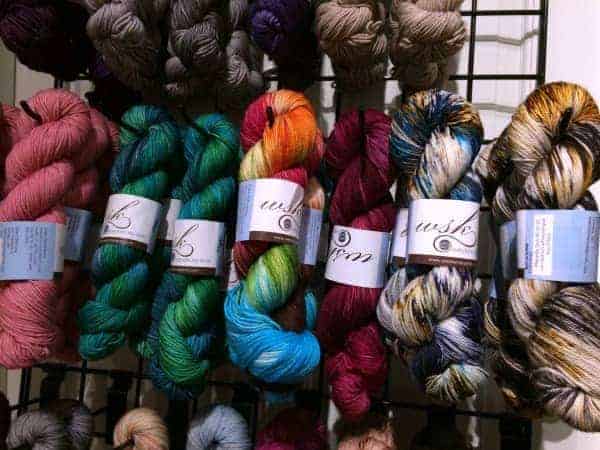 I love telling this story. It was November and I was not inspired by the local quilt shop and in “make it” mode. One day I walked in to Kristi Johnson’s shop, Eleganza Yarns, and asked if she could teach me to knit. It was November, and she was busy. So, with my “I can do anything” attitude, I bought yarn, needles, and a instruction pamphlet. I was struggling with the cast on and my husband, Paul, said, “do you want me to show you how to do that?” I swear, I never knew he could knit and purl. He said his grandmother taught him. So I caught the bug and told Mom she had to learn too. Mom found a local shop in Auburn, and the owner taught her.

I used to quilt a lot. Now it has its time and place. Mom used to needlepoint. 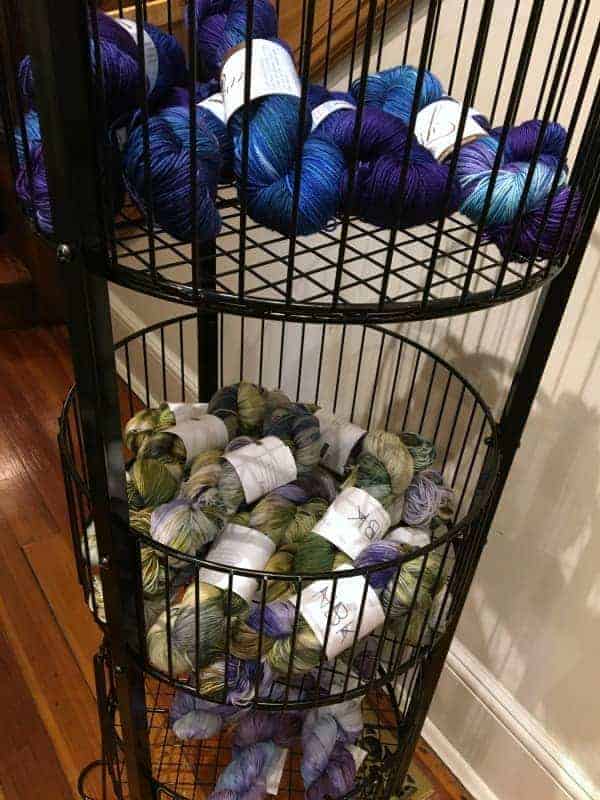 For me it must be my Color Affection. I started it before we ever thought about opening The Knot House. I had been to Montreal and found Espace Tricot. We love these girls! Anyway, it was the first time I had ever seen Sweet Georgia yarns, so I picked three skeins. I was making it for Mom and then it turned into one of our first shop samples. LOL.

Mom says her favorites are the selfish knits she does for her great grandchildren. She has done some exquisite baby dresses. However, she does admit that Lisa Mutch’s Asunder Shawl is a great story. We had just gotten in North Bound Knitting’s yarn, and there were these two yellows. Mom is not a fan of yellow. Ever. We thought that would be the color that wouldn’t sell… so she used them. One was a perfect lemon color. Damn if we didn’t order those yellows three or four times. And one day, after the shawl had run its course, a man came in and offered Mom an unmentionable amount of money for it. He was quite charming as I remember because they were quietly talking in the other room while some regulars and I were knitting in the front. Mom doesn’t entertain selling samples usually. Next thing I know, she is wrapping it up in a pretty package, and off he went. All day she said she couldn’t believe she sold that shawl.