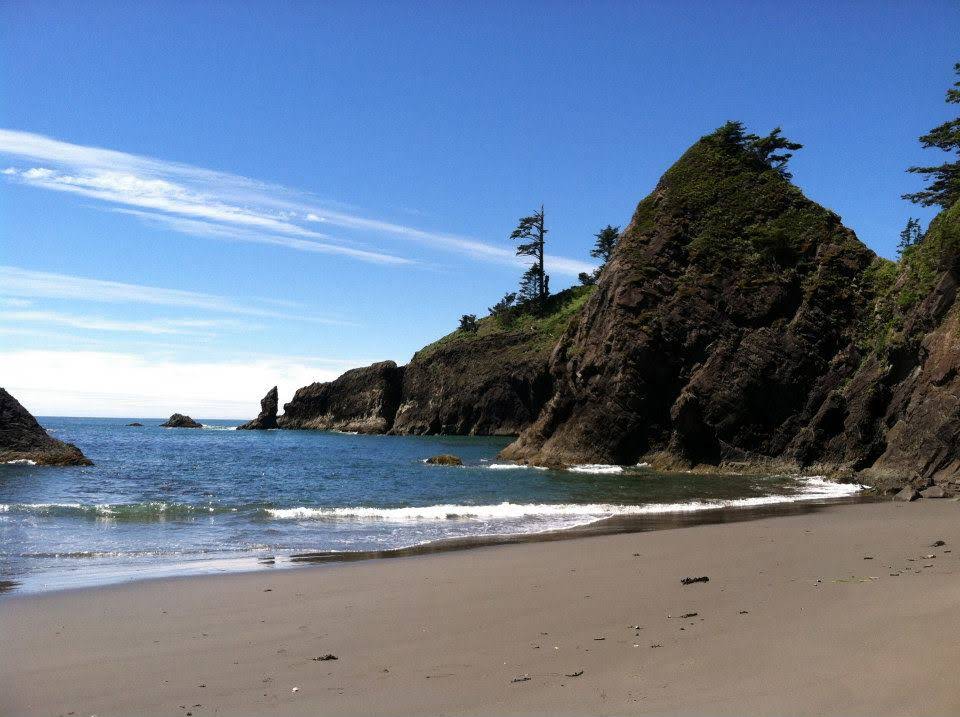 [Ed.’s note: This post coincides with the release of the Knitting Our National Parks colorway from McMullin Fiber Co., inspired by Olympic National Park. It’s available to preorder through May 1, 2020.]

In fact, some would argue the Hoh Rainforest in Olympic National Park takes the cake as the quietest place in the United States — in one square inch of rainforest.

The summer I worked as a park ranger, I was told about this One Square Inch (and instructed to warn people to stay on trail if they were headed to find it). So naturally, I sought it out as a prime knitting spot.

The park is, without a doubt, the epitome of peace. Walking through the Hall of Mosses feels like sneaking through an empty home. And yet, there’s a buzz around you. A feeling of abundant life just beyond the boundaries of your senses.

And it’s a gorgeous destination for knitting. Later, I’ll list my favorite knitting spots around the park. But the one I visited most was just alongside the Hoh River. This was my chosen sanctuary for elk-watching, solitude, simply being — and of course, sneaking in a little crafting. 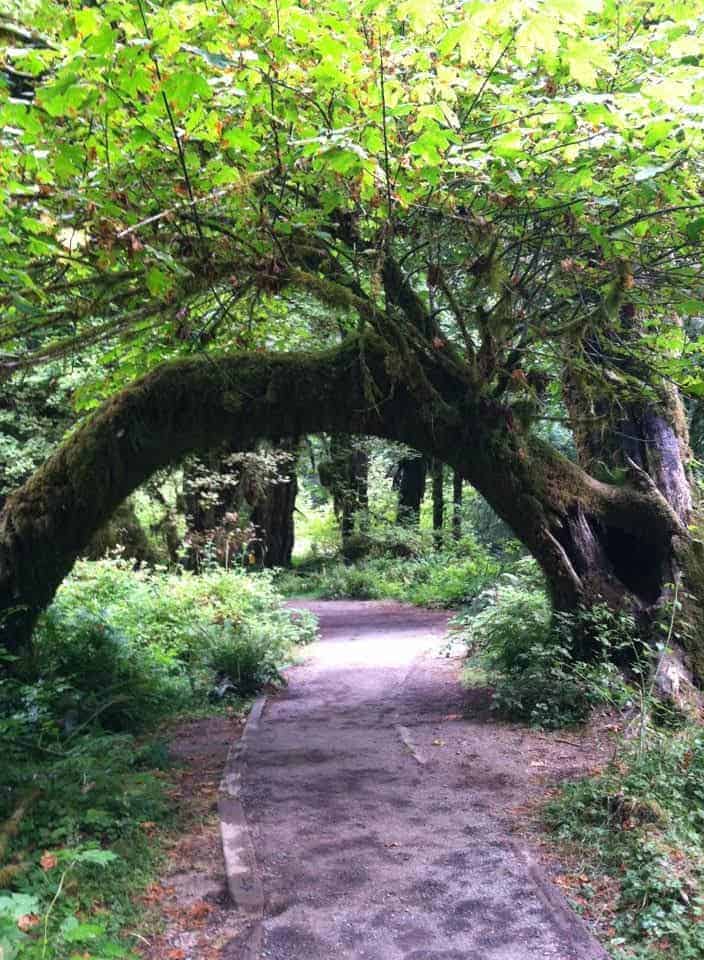 Living and Working as a Crafty Park Ranger

Working as a ranger came with feelings of great responsibility, pride and passion for untamed wilderness. It also came with a lot of time alone in a very small entrance booth facing the same two trees for hours at a time.

Eventually, I got to know and love those two trees (which turned out to be red alders). I started to notice little details, like their adorably tiny pine cones. Soon, I was reading about them. Apparently, after a wildfire, red alder trees are among the first to courageously repopulate the area, making way for new life. And the knitter in me was excited to learn that their bark could be used to create a natural, rusty red dye.

Suddenly, my nameless tree companions became a life form I was emotionally invested in.

This mirrored my experience as I got to know the park. Every lichen, wasp, bird and stone became a source of fascination until this place I called my “office” took root inside of me. And though I no longer work and live on the Olympic Peninsula, it’s part of who I am.

And it continues to inspire the patterns, colors and textures I choose for knitting. 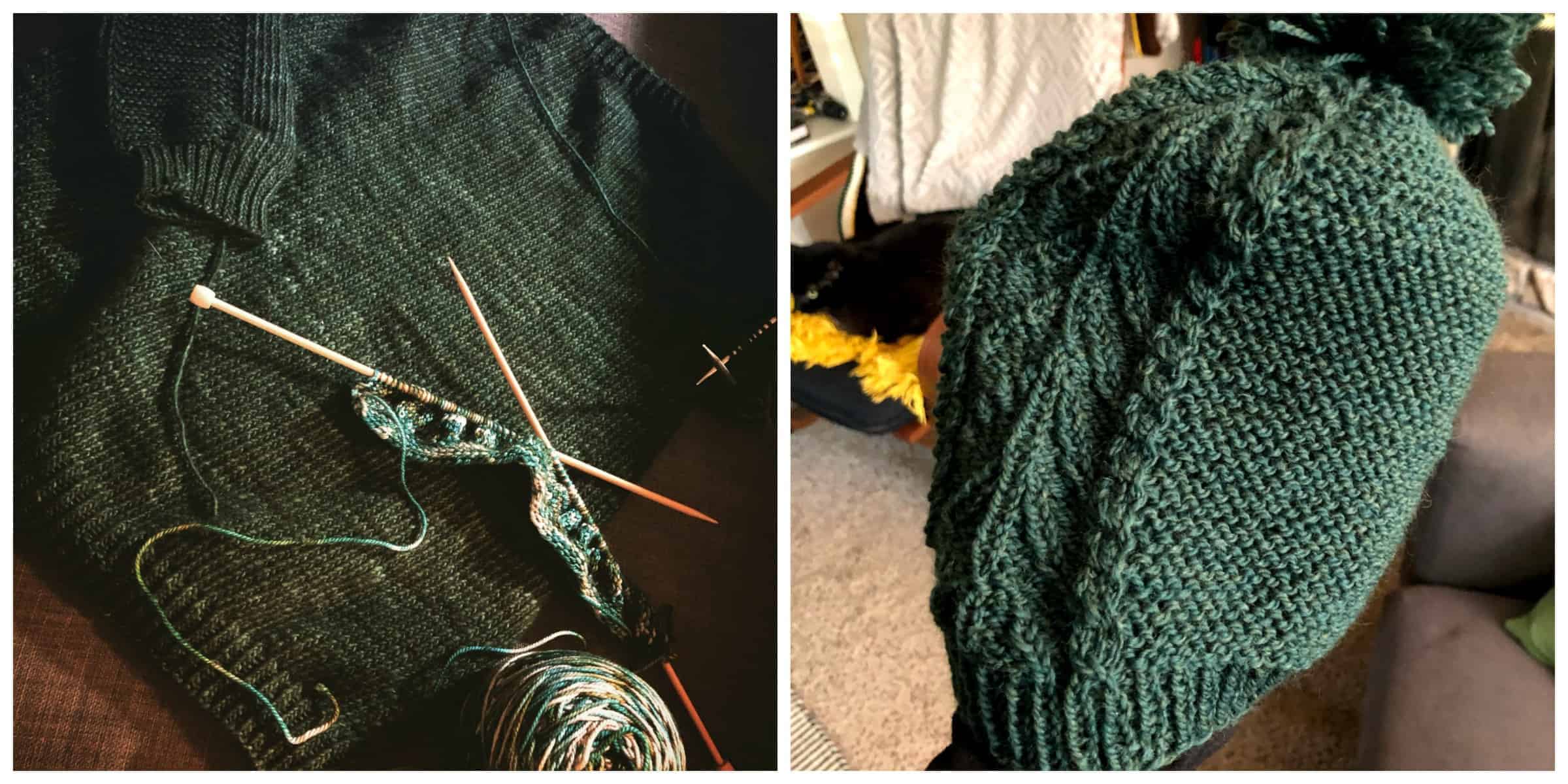 I often choose deep greens as I did for this Tin Can Knits Flax Sweater (left), or forest motifs like this Boyland Knitworks’ Faller’s Cap (right). Photos by Amira Umphres

The first time I saw Olympic National Park was the summer of 2013. It got under my skin and never left. Its enchanting landscape has a habit of taking hold of your heart. I dreamed of being a part of it.

I’d volunteered for the San Antonio Missions National Park, majored in anthropology as an undergraduate and worked for UT Austin’s computed-tomography lab in the Geosciences school. You could say I was a little obsessed with science, history and natural heritage.

But it wasn’t until I saw a documentary on national parks where an African American park ranger was interviewed that I actually felt I could take the leap. Seeing someone who looked like me in a ranger uniform somehow melted away a lot of the doubts I’d had about becoming a ranger myself.

With this thought floating in the back of my head, and some helpful tips from a friend who’d worked as a park ranger, in the spring of 2015, I sent out applications to almost every national park in the U.S.

I only got one reply.

It was from Olympic. They had a spot for me at the Hoh Rainforest.

I said yes immediately and drove 1,900 miles from my home in Iowa with my family in tow. We rented a one-bedroom house connected to an old surf shop in Forks (the town of Stephanie Meyer’s Twilight books fame) and settled in for the summer. 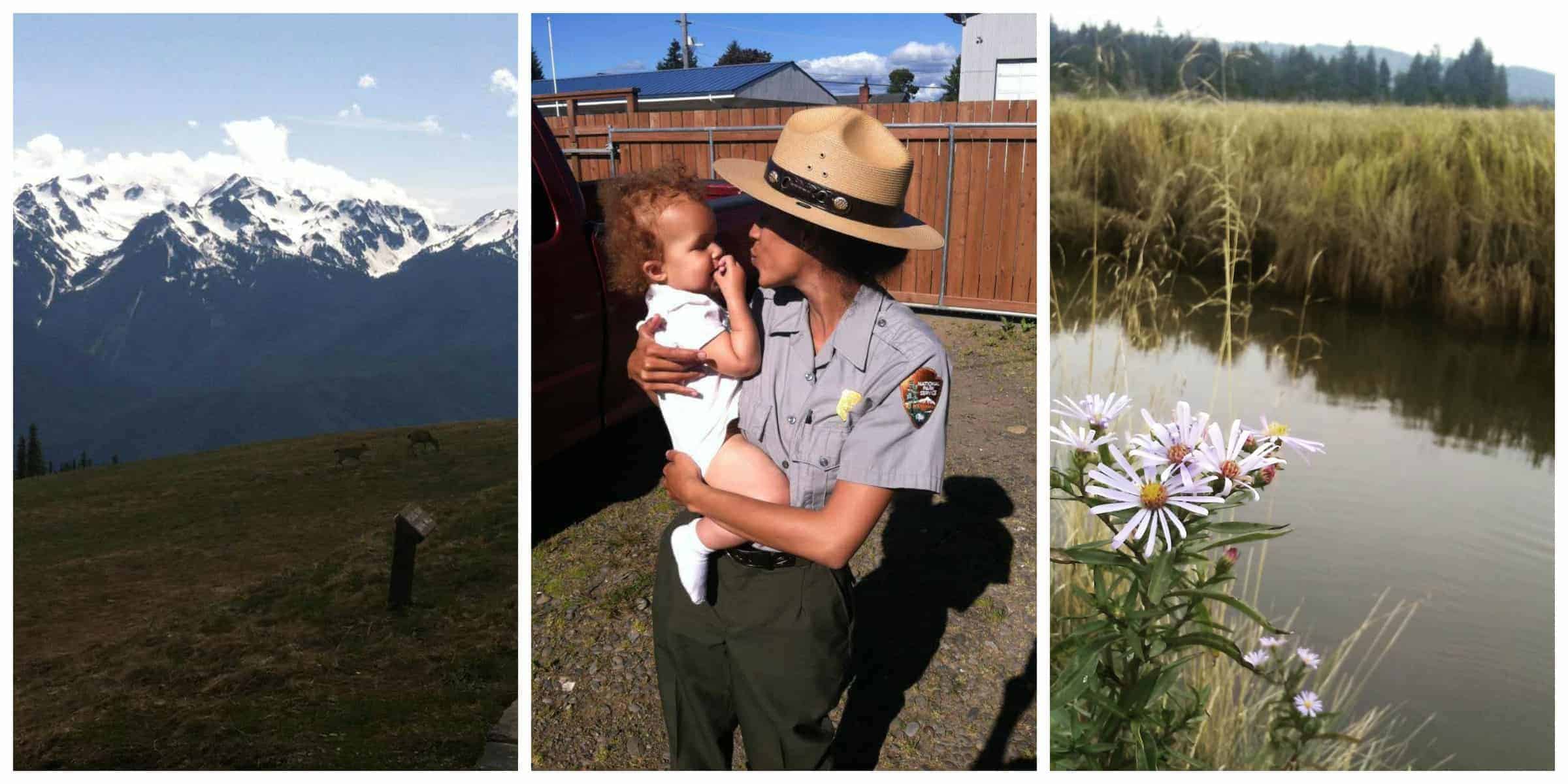 From left to right: Hurricane Ridge, My daughter, Nora and I, Flowers in the park. Photos by Amira Umphres

Olympic National Park is an unparalleled protected wilderness. Not a single road crosses through the park. To get from one end of the peninsula to the other, you have to go the long way around (or, I suppose, you could hike!).

The peninsula has a population of around 378,000, spread out over 3,600 square miles. My fellow rangers were a tight-knit bunch. There’s not much choice when you’re living in such a remote place.

Though I was stationed at the Hoh, part of my job was to explore the rest of the park. We had work days dedicated to getting up close and personal with as many areas of the park as we could. It’s a very, very big park.

Life on the Olympic Peninsula

Not only is the park large in size, it’s large in biodiversity.

Olympic shelters an impressive range of flora and fauna. There’s a swift elevation change between the snowy mountain peaks and the sweeping coastal forests and beaches. These changes create precious and varied habitats. Olympic also houses the last stand of old growth temperate rainforest in the lower 48 states.

Like the landscape, the weather varies wildly. Olympic’s intense beauty is carved out by landslides, floods, wind storms, avalanches, heavy snows and wildfires.

Black bears, beaver, salmon, cougars, mink, whales, deer, marmots and otters (among many others) call the park home. And so does the largest herd of wild Roosevelt elk in the country.

Actually, the Roosevelt elk were the first to greet me on my first day at work. The Upper Hoh Road stretches roughly 18 miles from the main highway to the park entrance. It curves and bumps through towering hemlock, spruce and cedar trees, taking you around blind corners and sharp curves.

It was around one of these corners that I was welcomed — and stopped — by a herd of elk that had chosen the road as a spot for a nap.

I honked my horn. Nothing. Honked again. Got a few stares.

So I waited. No one was coming or going on the road that time of morning. I had no cell service.

After a couple of lazy minutes, they decided to move on. Slowly. I was late to work. And I learned to live a little more slowly in this place. Slowly, and far more connected to (and at the mercy of) nature than I’d ever been.

A Place of Connection

Knitting so often comes from a place of love and connection to the things we deeply care for. And Olympic is a living, breathing reminder of connection. I’ll share just one, small piece of that connection here. 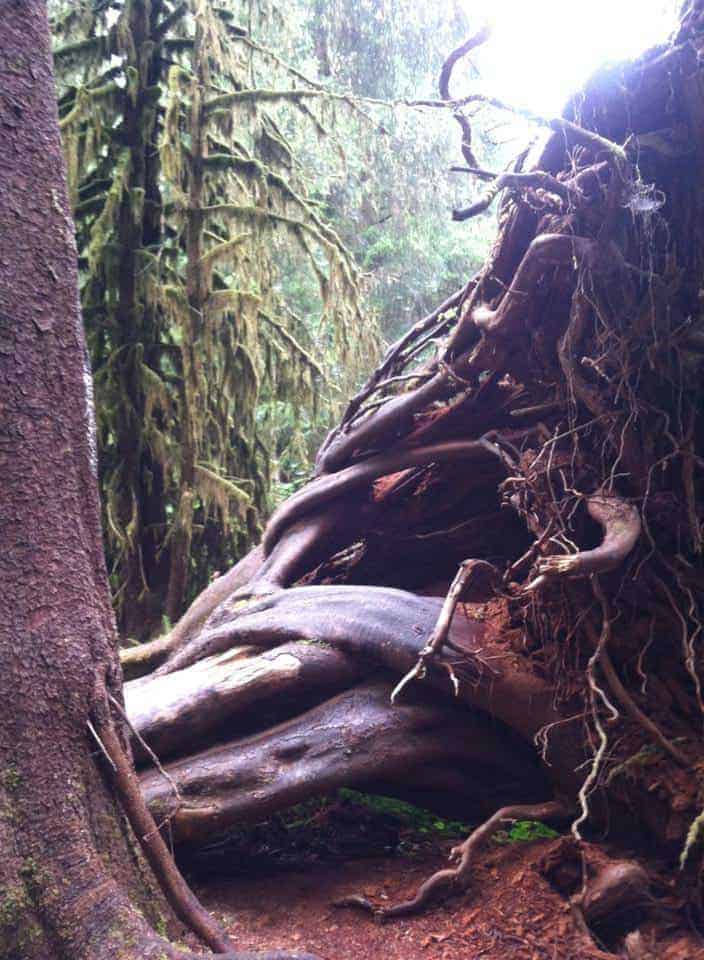 During one of those quiet times working the entrance booth, I came across a brief paragraph in a book. It was about the shallow roots of the rainforest’s trees.

With approximately 140 inches of annual rainfall, they have no reason to go far, which made sense to me. But I hadn’t thought about how these shallow roots played a role in the grand scheme of things.

Washington’s wind storms are notorious for blowing down massive trees, and the trees fall easily because of their shallow roots. And when they fall across a river, they create shelters — shelters where salmon can safely spawn, and where their tiny fry can grow and flourish. Once they’re old enough, after living in the safety of the fallen tree, they swim downriver, following it to the distant ocean, where they remain for several years.

But once they’re ready, they remember. They find their river. And not just any river — their home river. They swim with all their strength to get back. They jump as they go, fighting against the currents.

Their bodies become part of the soil, bringing rich nutrients from the ocean. Nutrients needed by — you guessed it — the trees that helped bring them safely into the world. They give back to the trees with their lives.

I’d sit alongside these rivers, watching the trees and, later in the fall, watching the salmon return. It was my favorite place to knit, because knitting for me is a way to connect, to make something I could use to give back to those who nurtured me with their love and kindness. Like trees and salmon. 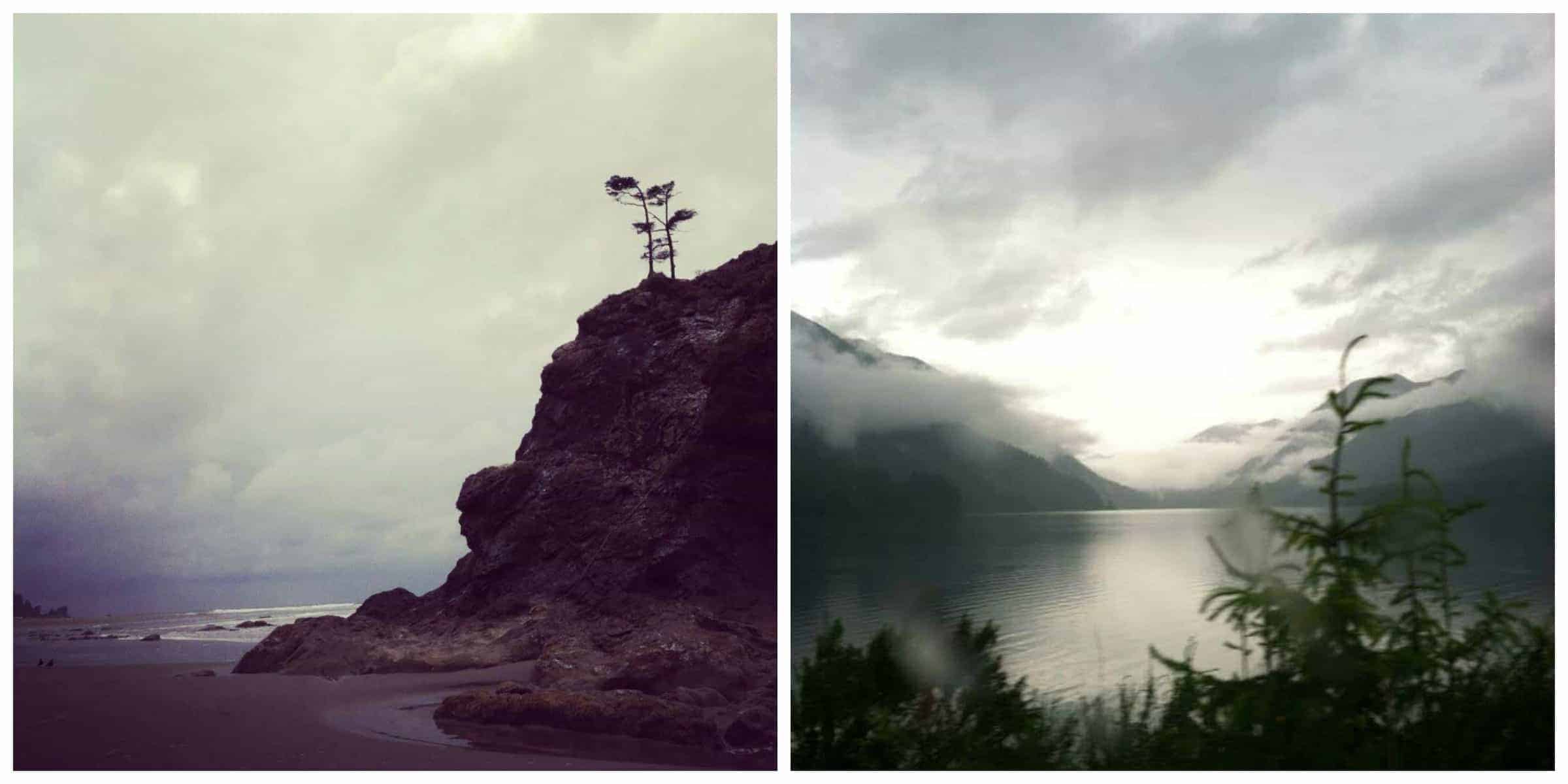 Second Beach at La Push: Second Beach doesn’t require a ton of hiking to get to the coast — which meant I could haul plenty of yarn. The beach is breathtaking and rarely overwhelmed with people. Driftwood from massive trees make perfect natural seating for crafting.

Lake Crescent: Lake Crescent is downright dreamy with crystal waters encased by mountains. One of my favorite knitting moments on Lake Crescent was watching a bald eagle float through the sky, then dive for fish.

Hoh River: It’s no surprise that the Hoh River was one of my favorite knitting spots. There was silence, beauty and serenity beyond compare.

Kalaloch Lodge: Kalaloch’s Creekside Restaurant — there’s no better place to catch a sunset. And no place better for public knitting than while watching the Pacific do its thing from an elegant dining room.

Ruby Beach: Low tide at Ruby Beach is an absolute must-see. And tide pools were the perfect place to have my kiddo entertained, searching for starfish and sea urchins while I kicked back on a beach blanket with my latest WIP.

Olympic National Park is a stunning palette of colors — from pristine snow to blue glaciers, brilliant emeralds and deep mossy greens, dusky sand beaches and steely ocean skies, purple starfish and white foamy waves, slick black sea stacks and peach sunsets. I can’t think of a better place to knit — and to reflect on the people, places and moments that inspire us to keep creating.