Yarn Club for Round Table Yarns 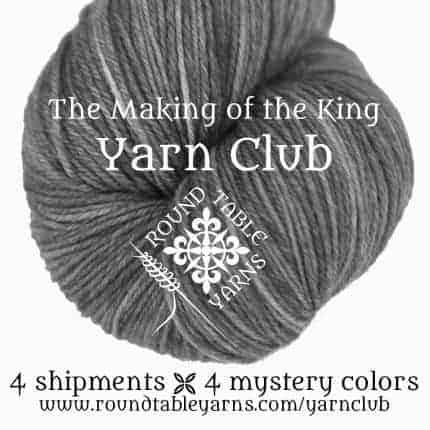 Become part of the first exclusive Round Table Yarns yarn club and be the first to receive new yarn colors and a new base! You’ll also receive a completely exclusive self-striping colorway, available only for this club.

The theme for this club is “The Making of the King,” or how Arthur came to be King Arthur. Sign-ups for the club run from January 5-29, 2016 (or until the club sells out).

Each shipment will contain
– one skein (100 grams) of yarn, a different base each month
– links to suggested patterns for that month’s yarn
– a bonus surprise item
– the part of the story used as inspiration for each colorway

Payment can be made in installment payments or upfront (at a slightly reduced rate). See website for specific details.

I’ll also be hosting a KAL/CAL in my Ravelry group for the club where you can join the community of club members, use your yarn, and get a chance to win some prizes!