My relationship with knitting over the years 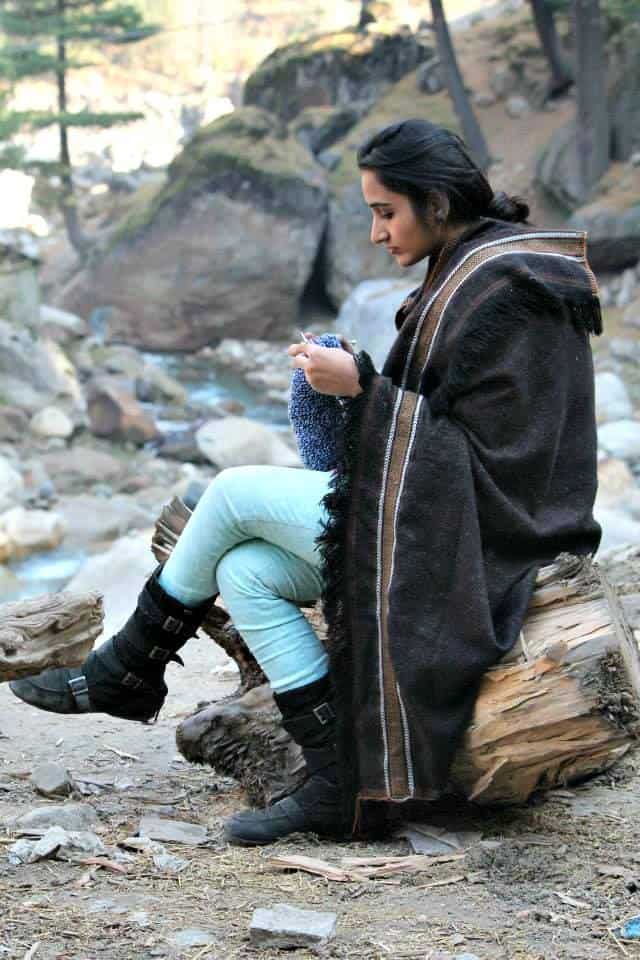 I have always been captivated by arts and crafts. My drawer used to be filled with crafting equipment, like oil paint and watercolors, and needles and thread, which motivated me to do all sorts of DIY projects: embroidery, glass painting and latch hook sceneries. I remember spending hours in craft shops, just going through the items, looking at things I did not own and later researching what they were used for. It was one of my favorite pastimes. My mom was also invested, encouraging me to take up new projects and helping me with them.

So, my fascination with knitting was not something that amazed others. As a preteen, during one of our summer vacations to Pakistan, I vividly remember my grandfather’s eldest sister playing with needles and some wool. Back then, I didn’t know what she was doing, but she was fast. She had a shopping bag full of wool in vibrant colors beside her, working through it as the project increased in size.

As I grew older, I realised what she was doing was called knitting and that it was her favorite thing to do. She was known for her love of knitting, even though she lived in Karachi, a city with an arid climate, dry and humid throughout the entire year. She would knit all year round, at home, at events, everywhere. When someone was sick, she would take her knitting to the hospital, knitting away while looking after them.

My aunt passed away when I was still a pre-teen, but I have strong memories of her knitting, and there are many wedding videos where she was caught knitting on camera. 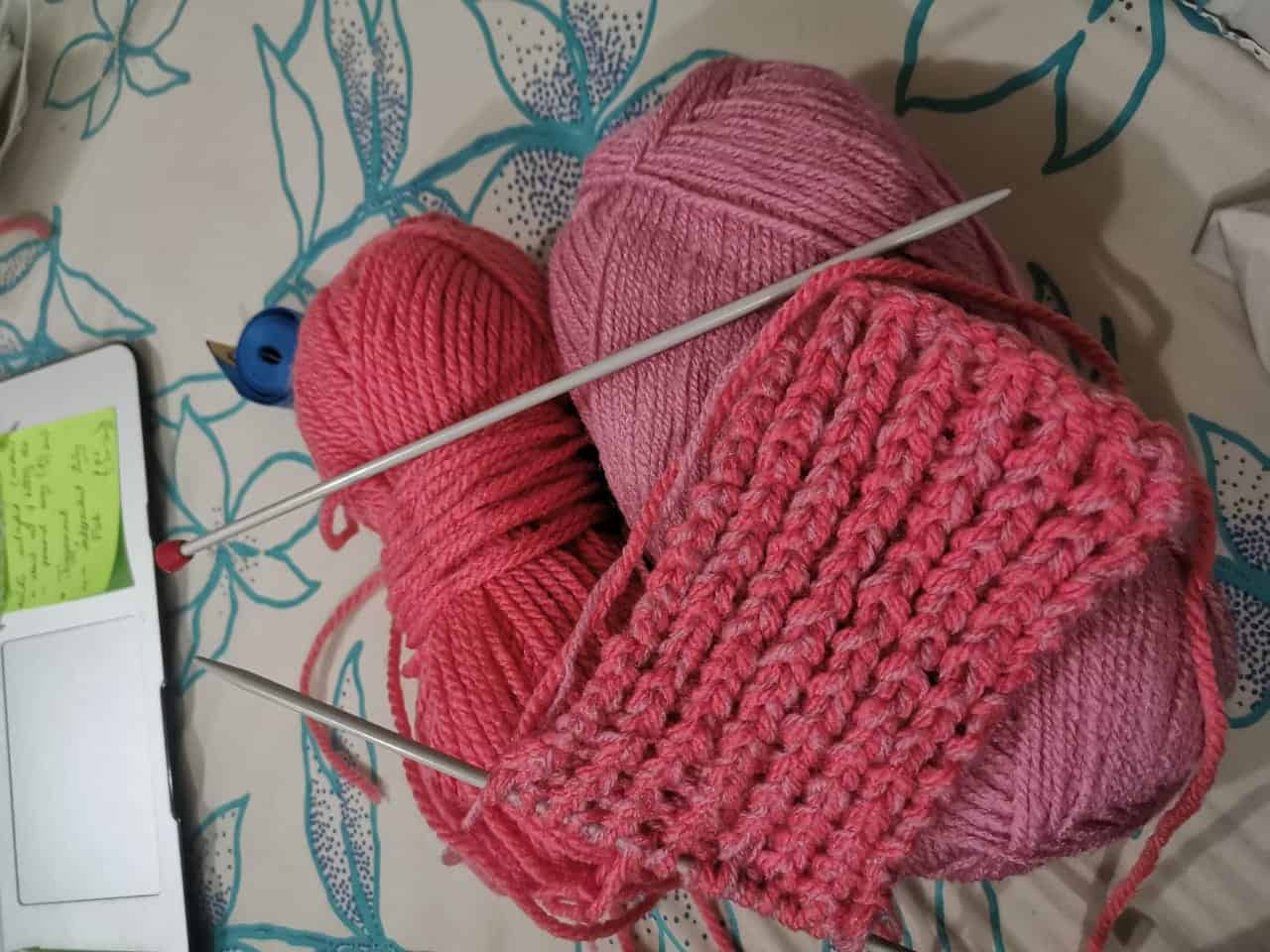 At some point during my early teens, when I was living in the United Arab Emirates, I had this urge to learn how to knit.

I went out with my grandmother — who knew how to knit, but had put down her needles after moving to the UAE, where it was too warm for sweaters — and we bought some wool and needles. I learned how to cast on and how to make a knit stitch. I was invested for a few weeks, but never finished the project. I was slow, and had school and homework to do.

I did not see anyone knitting or show enthusiasm for the craft until I moved to Pakistan in 2011 for my undergraduate education. I was in Lahore, where winters are harsh and dry. The temperature can drop to 0 degrees Celsius in December. I had never required warm clothes to such an extent, nor seen people wear all things woolen, except in movies. I started noticing people around me knitting, and some of my classmates would tell me their grandmother or mother had made the sweaters or scarfs they wore to class.

It was around this time that I saw one of my dad’s cousins, who lived in Lahore, knitting as soon as winters began in late October. My interest in the craft started developing yet again.

However, it was not until 2014 when another knitting aunt was visiting Lahore that I asked her if she could teach me. That is when I took the craft seriously. We went out to buy some wool, the wool shop a small stall in a crowded market, full of wool in vibrant colors stacked to the ceiling. I bought a multi-colored ball of yarn, with twisted strands of black, white and gray.

I did not know which needles I needed, or the type of wool. I completely relied on my aunt’s opinion. She taught me the basics of knitting, how to cast on and knit a stitch. She had passed the craft to her daughter and now me, making me the third generation of women from the family to learn how to knit. She asked me to keep knitting the knit stitch until I finish the ball so that I not only perfected the stitch but also picked up the pace, and then she would show me how to bind off. I spent many days learning from her and we knit together during the winters. 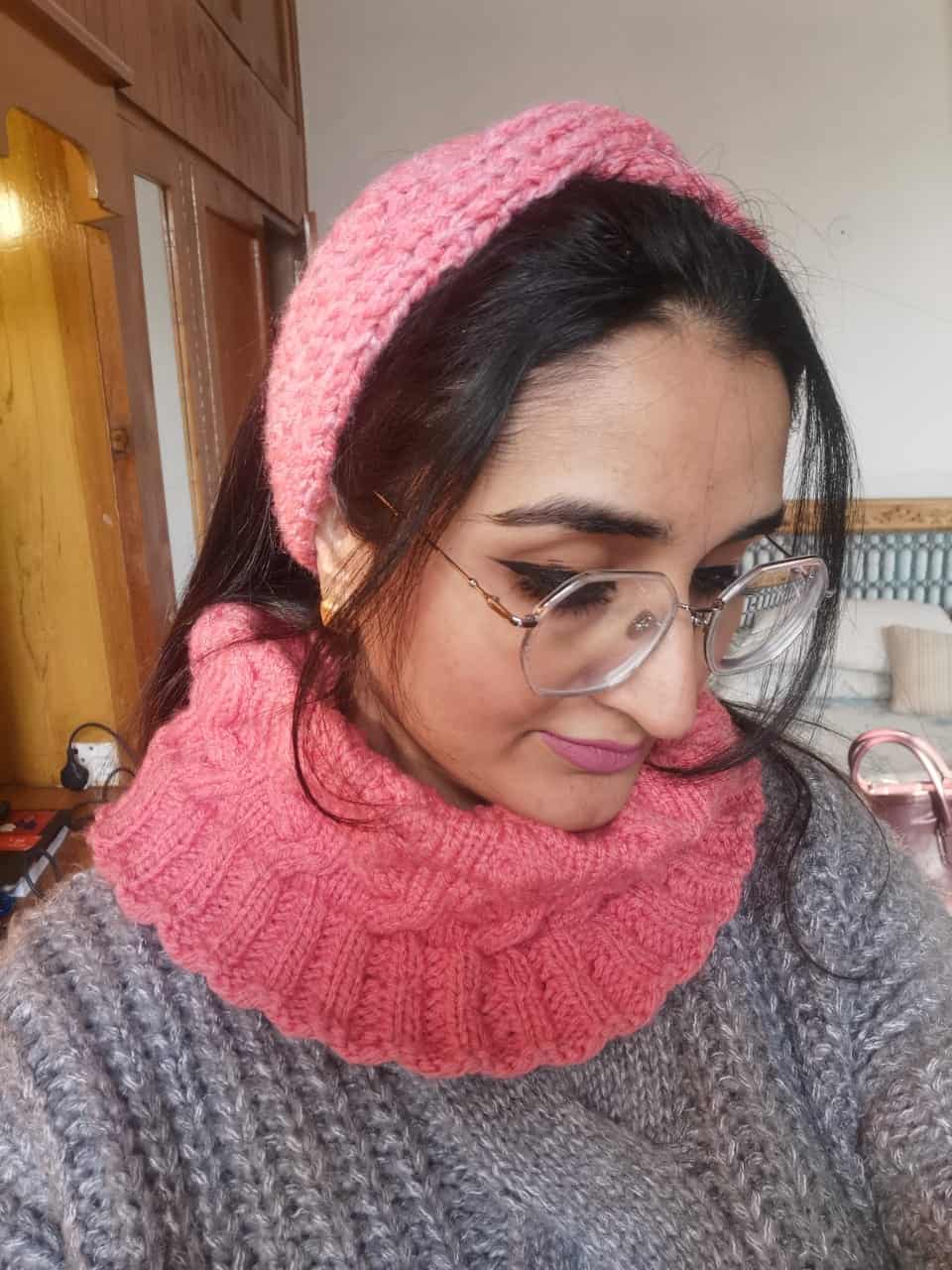 Even though I was in my late teens, it took me a while to get used to holding the needles properly. I knit everywhere I could get the chance: in my hostel, during classes. This time I was truly invested in the craft. Yet, I was slow, and it took me an entire season to knit my first scarf.

My first project which was the black, white and gray scarf that even went with me on a tour to Kashmir. It was peak winter, in December. It was freezing, and I enjoyed knitting in the valley of Kashmir the most. The beauty of Sharada, the town we were visiting, added to the energy I put into the craft. However, it was one of the most crocked pieces ever knit! The stitches were all over the place, there were missing spaces, I forgot some loops, I added stitches and reduced them without even realizing how I did it. Still, it resulted in a long and warm scarf.

It was my first piece and I felt pride once it was completed. I gifted it to a friend, who’s now my husband, and he wore it for a good four years. It helped him travel to and from work by bike during Lahore’s harsh winters.

The unevenness of the scarf did not deter me, and I knit in summers too, gaining momentum. I made fingerless gloves, more scarves and beanies. I would gift most of my projects to friends because they appreciated my work the most. They did not know anyone in our generation who knit, nor did I. I was the only person in my circle who knit and everyone was fascinated, from my instructors to fellow students.

My skills improved every year through watching YouTube videos and reading blogs, building on the basics my aunt taught me. Sometimes I would start projects just to try new stitches and patterns, and not finish them. I was intrigued by the versatility that manipulating just two stitches could bring about. 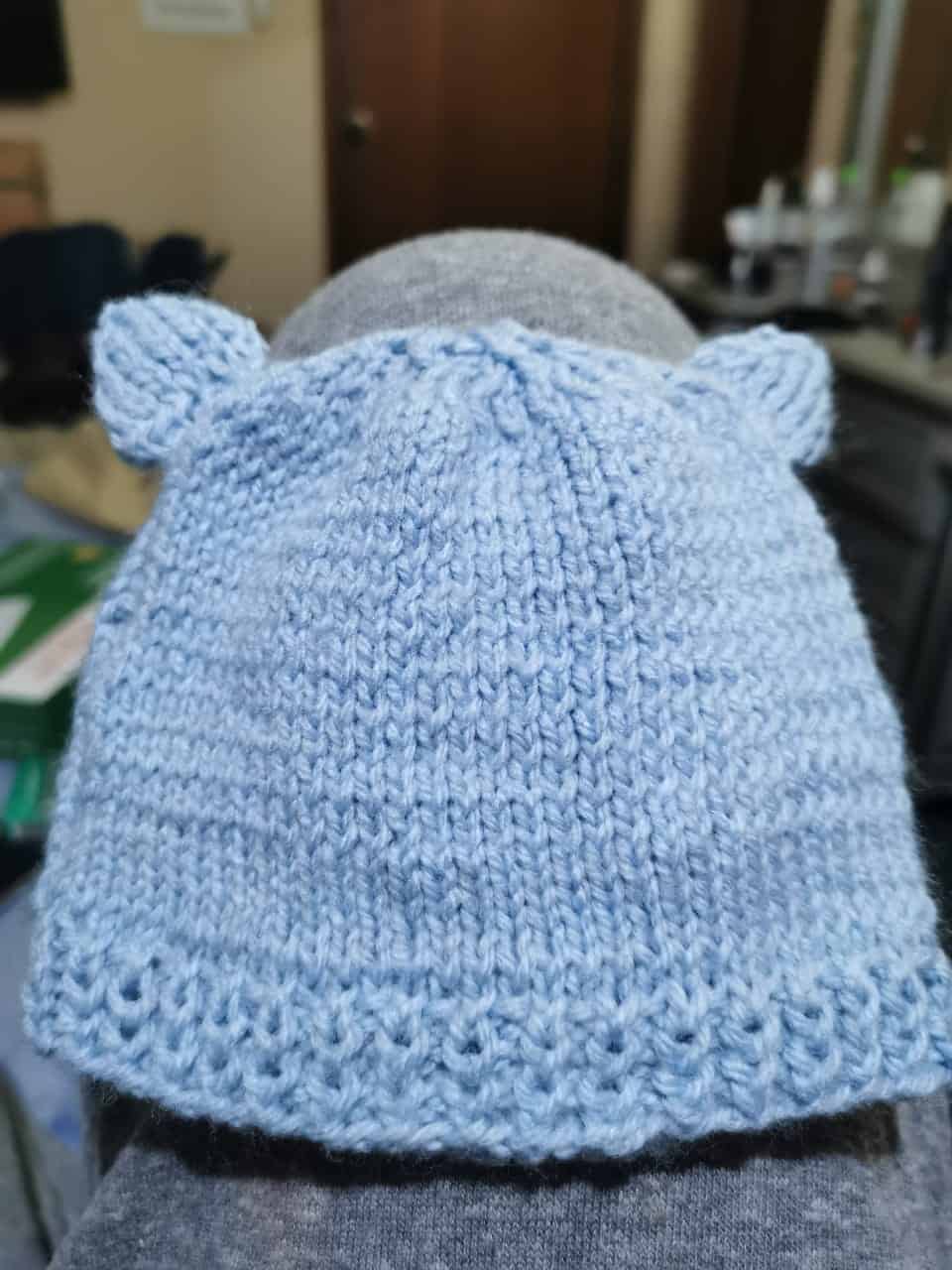 Between 2016 and 2020, I yet again moved away from the craft, becoming busy with my career and life.

Then, last spring, amidst the pandemic, my husband I learned we were expecting our first child. It was time to bring out the needles again.

I made mittens, caps and gloves for my baby, as well as a small infinity scarf. The projects were so tiny and easy, that I made a couple of pairs. I’m not yet ready to knit sweaters, but creating smaller pieces still gives me joy.

It’s been a surreal experience, knitting the very first winter wear for my baby after having knit my first-ever scarf for his father years ago. Like a handknit garment, life came full circle. 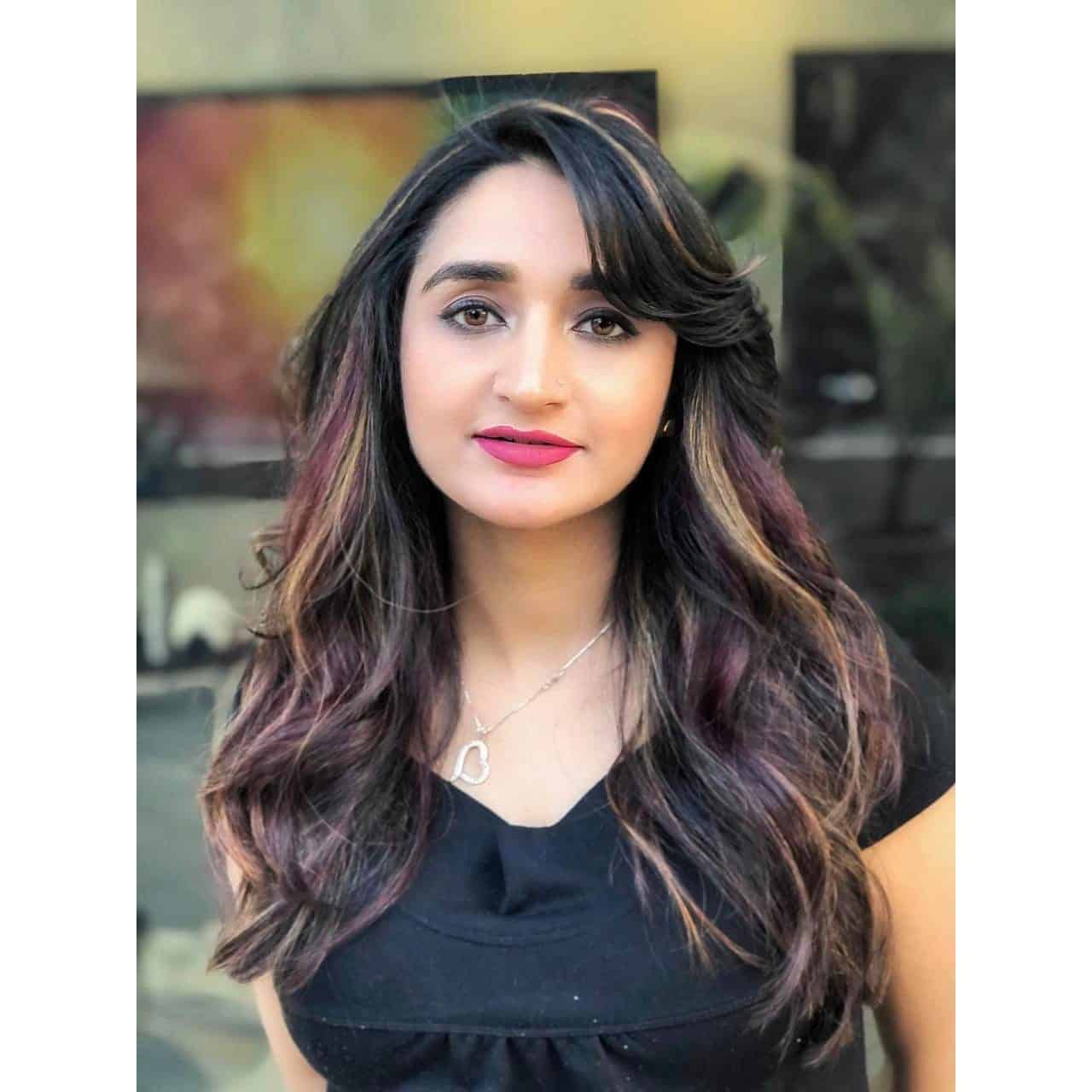 Annam Lodhi is a Pakistan based freelance digital/data journalist. She focuses on women’s issues, human rights, culture and tech. Her work is compiled on her website annamlodhi.com and she tweets at @AnnamL0dhi.