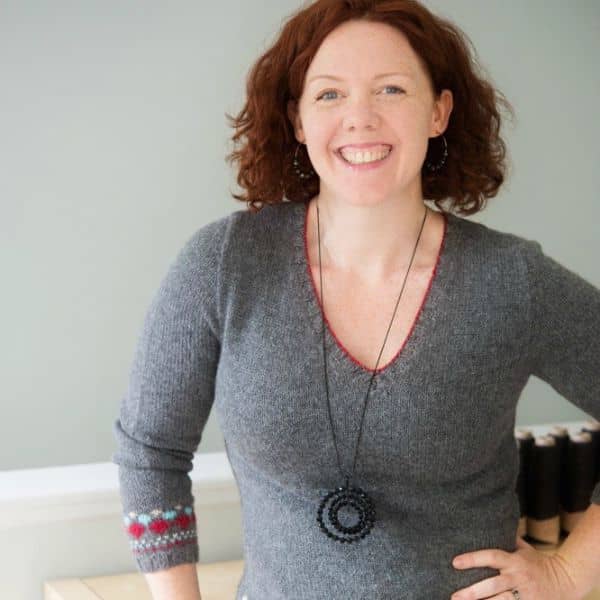 This is the first in a series of interviews with the fabulous sponsors of the 2015 Rhinebeck Trunk Show.

Like most women, I don’t have an off-the-rack body. At 4’9”, with narrow shoulders and curves, I send most of my clothing to the tailor for alterations. What this means for sweater knitting is that, after getting excited about the pattern and yarn combination, and (hopefully) getting gauge, I then have to make a bunch of modifications — and I’d definitely rather knit than deal with numbers.

In 2013, designer Amy Herzog answered my math-averse prayers when she launched CustomFit, a web-based software that takes your measurements and gauge and builds customized sweater patterns. I’ve knit two sweaters using CustomFit, and they are by far the most flattering garments I have ever made.

Amy, a self-proclaimed math nerd who’s worked in computer security, also has a great eye for what looks good — she teaches the popular Fit to Flatter class, where she discusses the sweater styles that complement different body types. Here, she gives us a little peek “under the hood” of CustomFit and a glimpse into her background as a maker.

How did you come up with the idea for Custom Fit?

Hm, I think the idea for CustomFit emerged and changed over time, rather than happening all at once. I guess it started with something I created when I first started designing!

Since my background is in computer science, my first instinct when I do something more than once is to write a program to automate it. So when I first started designing, my husband (also a computer scientist) and I created a program that generates my finished traditional patterns — the stitch counts, the English, everything.

As I started teaching classes on fit and modifications, I started thinking more and more about taking that program and making it more general — so that every knitter could get a pattern automatically written for them. At first, I envisioned something that would create a pattern based on a set of desired garment measurements — that’s the way my original program works. Then, I thought maybe people would want to put their body measurements in instead, along with something about fit.

And… yeah. It just kind of grew from there! 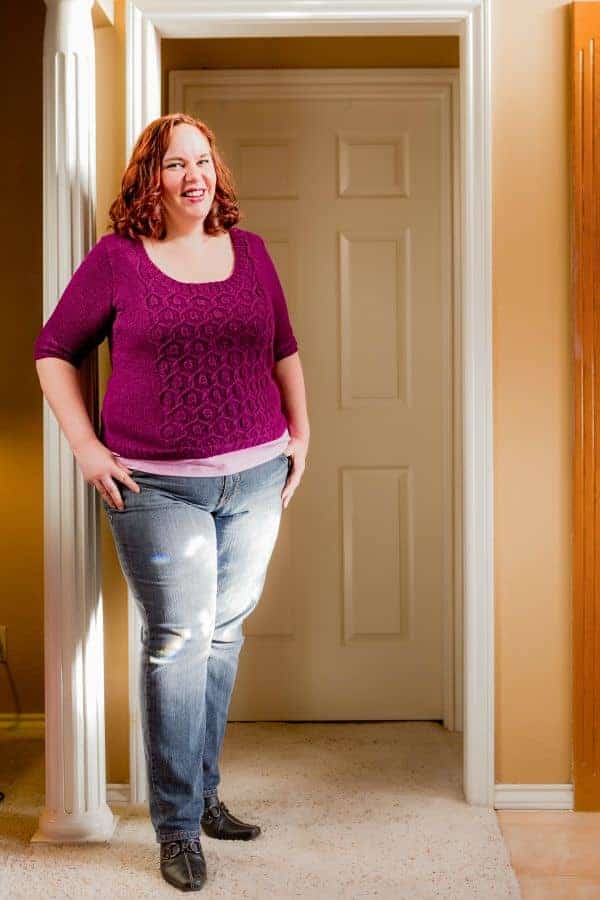 A CustomFit sweater by Jennifer.

What did creating the Custom Fit software entail?

As you can probably tell from my answer to the last question, it was a lot more complicated to build than I’d first thought it would be! When we built my original generator, I put in lots of assumptions about the target dimensions that aren’t actually true across humanity. Finding those, and generalizing the logic, was quite a process!

Because tackling the hardest stuff first is kind of how I roll, I started by developing a full set of logic for a sweater that would take any person’s figure and make them look what I call “moderately hourglassy” in my Knit to Flatter classes — that is, the combination of eases should provide the visual illusion that your bust and hips are larger than your waist to a moderate degree.

After I hashed out that initial specification, we worked on core pattern creation for a bit over a year before we had something I thought would work. We then hired out other programmers to develop the front end web framework, and spent about 3-4 months getting things ready to go live with the initial site.

And we’ve been refining and improving ever since! (For the code-curious among your readers, at this point we’ve got about 50,000 lines of code, mostly python, and our team is tiny! As of this writing, we have less than 40 hours a week of development time, spread across three lovely developers who all have other day jobs.)

You have a background in computer science. What have you done in your “techie” career and how does that influence your design work?

My degree is in mathematics, and I started work waaaay back when on computer security projects that used logic. We’d analyze and create designs for safer systems based on models that showed how information could flow through the systems under various assumptions. I’ve always loved speaking and presenting, so I moved fairly quickly into leadership roles, and eventually managed a large research team and portfolio (still within computer security) before leaving that part of the tech world.

I think that the most obvious influence my background has on my work is that my first instinct is always to automate as much as I can! If there’s a calculation I do more than a couple of times, I’ll make something to do the work for me.

I think that if you look further out, though, you’ll see more influences — the whole way I think about sweaters is very CS-oriented. I look for patterns and similarities between things, and try to help knitters see sweaters as combinations of different components that can be “swapped out” or changed (vs. a “design” as an unbreakable unit). I also prefer clean designs, that are created specifically to be easy to modify, instead of more organic constructions and very complicated stitch patterning. 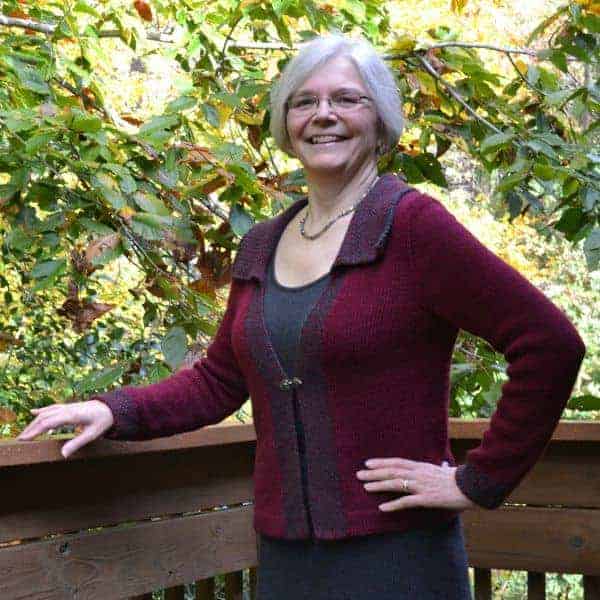 A CustomFit pattern by Kate.

Your Knit to Flatter class has been extremely popular, at Rhinebeck and elsewhere. How has it evolved with the creation of Custom Fit?

I love that CustomFit has allowed me to spend more in-class time on the things computers can’t do well. Fit is important, but let’s face it! A computer generated all of the numbers in a traditional pattern anyway — why not just have the computer do the correct work for you in the first place?

If I don’t have to spend a lot of time talking about how to calculate double darts, we can talk a lot more about why you prefer a V-neck to a scoop neck, or how you’d look in belled sleeves vs. tapered, and what you want to draw attention to on your body, and what fabric that design demands.

Which isn’t to say that I hate the math or anything — I’m a certified nerd that way and I adore the calculations — but most of us have knitting as a hobby because we fall in love with the fiber and the fabric, you know? Let’s spend more of our hobby time doing that.

I learned from the women in my family when I was very very young — I don’t really remember a time “pre-knitting.” I’ve always had trouble being still, and the story is that knitting, along with many other crafts, was introduced as a way to keep my hands busy. I didn’t really think much of it, and did more sewing than knitting by the time I was a teenager.

But when I was looking to take up a hand-craft again after my mother passed away in my early 20s, knitting suddenly seemed like the most natural thing in the world. Most of my memories of her involve a set of knitting needles and a cup of coffee. 🙂 So I marched to the nearest yarn shop, bought a sweater quantity of yarn, and never really looked back. 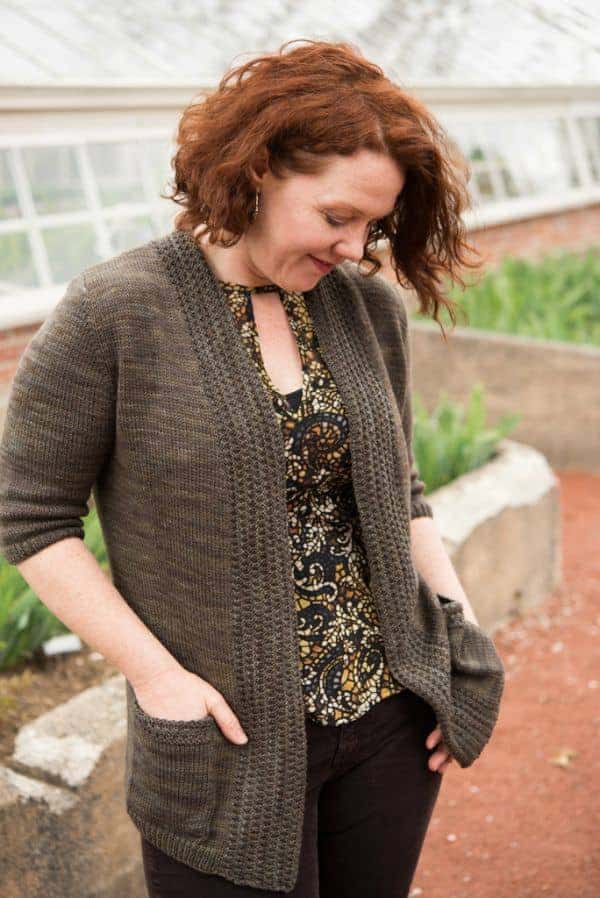 Who are some of your favorite indie dyers?

WOW, this is a hard question! At this very moment, I’m using a lot of Indigodragonfly, Woolen Rabbit, Spirit Trail Fiberworks and Eden Cottage yarns. I also adore Sweet Georgia, The Plucky Knitter and The Uncommon Thread.

Oh, yes! I’m a pretty dedicated maker. I sew (quilts and clothes and such), I can embroider reasonably well, I do a teeny bit of weaving, I can build basic stuff and I’m handy around the house. I also trained as a pastry chef for a while, and I make all of our own bread and so forth. 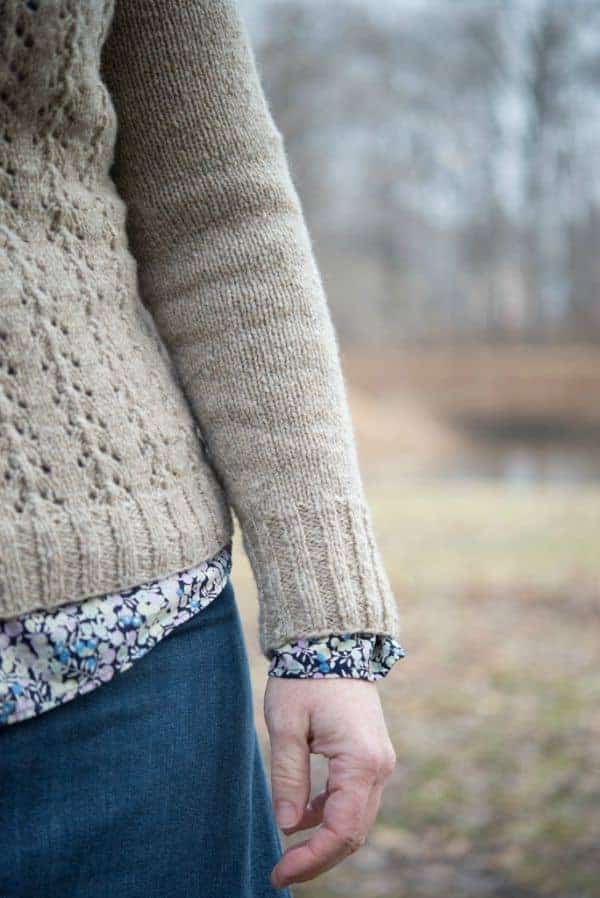 What’s next for Custom Fit and Amy Herzog Designs? Can you reveal any upcoming plans?

Oooh, yes, I can! This fall is pretty big for us! Up until now, all of the sweaters CustomFit has created were hourglass-shaped. We’re expanding the possibilities this fall! Look for straight, tapered, and A-line sweaters before holiday season rolls around, with collections of designs for men, women and kids. I’m super excited about it.

I’m also finishing up my third book with STC Craft this fall, though that won’t be out until next year. 🙂 It goes beyond the set-in sleeve construction and helps knitters of any skill level make a great sweater.