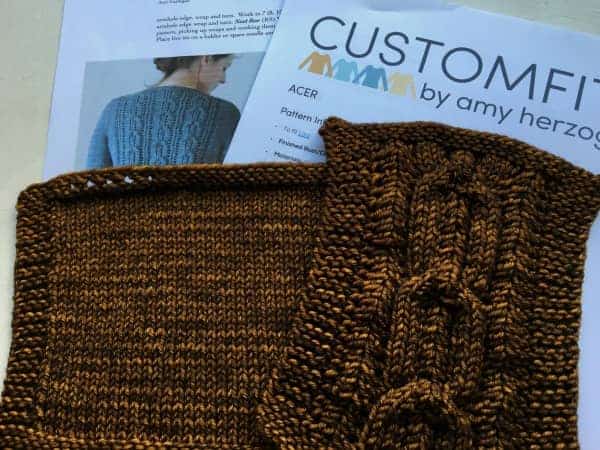 Tomorrow night marks the start of something I look forward to every four years — the Ravellenic Games! Yes, I do also love the games that start with the letter O (as a business, I do have to watch my wording), but I am more partial to winter sports, especially figure skating.

This year, I’m taking on a challenge I never thought I ever would have considered — knitting a cardigan. In pieces. With set-in sleeves. Backtracking a little, I have long wanted to knit an Acer Cardigan and I picked up a sweater quantity of Skeinny Dipping’s Journey Worsted at last year’s Rhinebeck Trunk Show to do just that, for this year’s Rhinebeck sweater. I knew I would be using Amy Herzog’s CustomFit, and after purchasing the Acer pattern, I generated a second pattern in CustomFit using my measurements and similar parameters: a crew neck cardigan with two inches of 2×2 ribbing and a 1-inch button band. The big difference is that CustomFit doesn’t account for stitch patterns that may affect your gauge. For cables, which generally compress stockinette, you have to add stitches to compensate. After gathering some advice from the awesome sweater-knitting experts in Amy’s Ravelry group, I knit a swatch in the cable pattern and then decided it would be less risky to knit the sweater in pieces, so that I would have a better idea of how it measured out before knitting too much of it.

I have set in sleeves on a CustomFit sweater before (it did take me several hours, but I did it!) so, in theory, doing the side seams should be a piece of cake. Still, I am a bit daunted by the prospect. My nightmare is that somehow not all of the pieces will block out to the right size and then won’t fit together. A couple of my knitting friends have offered to do some seaming handholding when the time comes, so I will probably take them up on it.

It didn’t help that last night, I attended a talk that one of my knitting groups held with designer Kristina McGowan, who developed a friendship with the fascinating Barbara Walker, a pioneer of top-down, seamless knitting. Barbara, Kristina explained, hated things like seaming and stranded colorwork, so she created her own innovative ways around them. Ultimately, as I’m a big follow-the-rules knitter, I will be sucking it up and seaming.

Since I already started the sweater, and most likely won’t be able to finish it in two weeks, I’m not planning for this project to be in contention for a Ravellenic medal. But, I am still considering this my Ravellenic project. Because the only way to grow, as a knitter, an athlete or just as a person, is to swallow your fears and jump in feet first (uh, or head first, if you’re a diver).