This is the third in a series of blog posts featuring the fabulous sponsors of Indie Untangled, taking place from October 15-24, 2021. Tickets are now available!

I know I’m not alone in being a sucker for hand-dyed yarn that tells a story. Rachael of Wool and Vinyl tells the story of rock and roll in her bright, fun colorways.

You can get a “backstage pass” and meet Rachael during our online show on Sunday, October 17 at 12 noon Eastern.

I originally wanted to learn how to dye yarn at the beginning of 2018 but was nervous to actually try, it would be later in the spring before I dyed my first skeins. My husband (affectionately known as Mr W&V) gifted me a trip to the Rock and Roll Hall Of Fame for Valentine’s Day that year. I wanted to make a rock and roll-inspired shawl or project to take with me on the trip but I couldn’t find anything that was really speaking to me. Which then got me thinking about how I could combine my love for both music and yarn together and Wool & Vinyl was born. And I got a ton of colorway inspo from the Rock Hall. 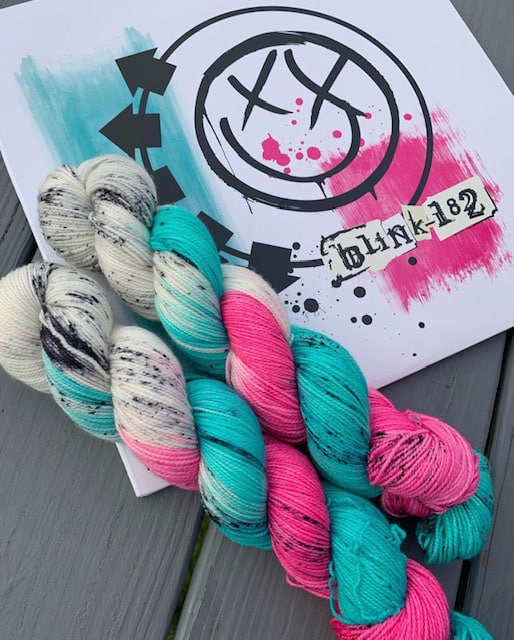 What inspires your colorways?

All of my colorways are named after rock and roll songs or artists and I put a lot of thought into which songs represent each color I dye. I usually listen to the song I’m dyeing for on repeat as I’m dyeing them. I’ve found that choosing a song first and then dyeing the colorway is easiest for me.

Some of my favorite colorways include November Rain, Noise Pollution, Highway To Hell, Dr Feelgood and Hotel California. I also have some really great solid colorways that are custom mixes of different dye powders so they are unique to W&V. Since I started dyeing I think I’ve really perfected my speckle technique so you’re getting skeins with those crisp little micro speckles which is one of my favorite parts of dyeing. Each speckled skein always ends up having a really cool section of all of these tiny little speckles. 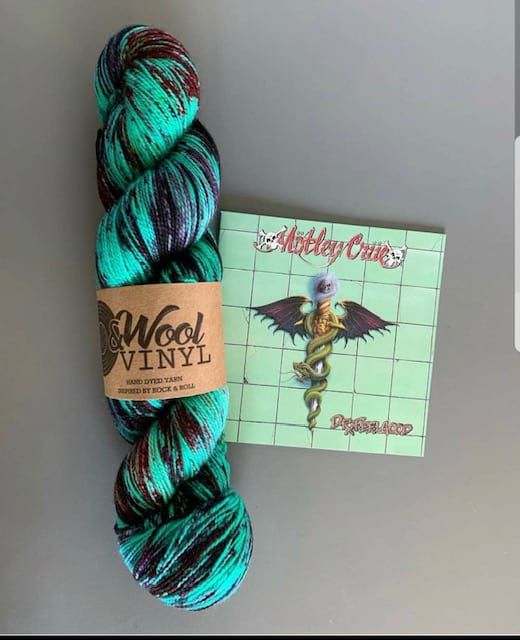 I’d love to dye more colorways inspired by album covers but sometimes they are difficult to execute depending on the album art.

What are some of your most popular colorways?

Some of my most popular colorways are also some of my favorites. I really love Dr Feelgood, the base color is a custom mix of dyes and the finished skein actually matches the album cover. I also have a Blink-182 colorway that matches their self titled album perfectly and its one of the colorways I’m most proud of. A few other popular colorways include Smells Like Teen Spirit, Go Ask Alice, Paranoid Android, All She Wants To Do Is Dance and my collection of Fleetwood Mac-inspired colorways which includes Dreams, Rhiannon, Gold Dust Woman and Stevie. 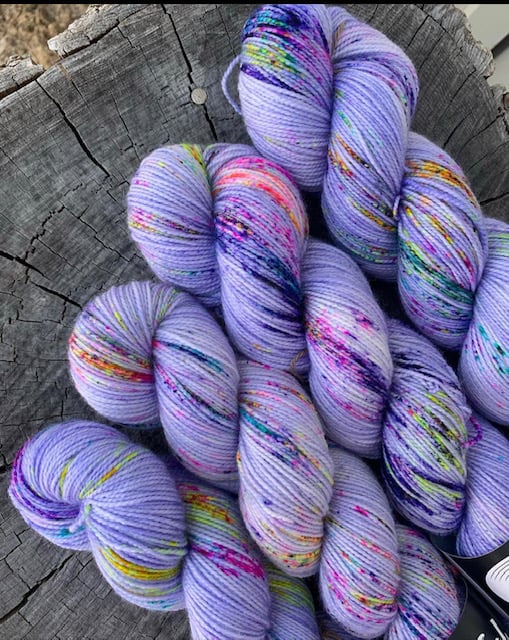 Can you share some of your plans for Indie Untangled?

I’ll be releasing two new bases during the show: Pop Punk Sock and DK bases, which are both rainbow tweed. I’ll also be dyeing up all of my Halloween-inspired colorways inspired by songs like Monster Mash, Scary Monsters & Super Creeps, Strange Magic, Moondance, Whistlin’ Past The Graveyard, Thriller and more. As well as creating some sock sets which is something I haven’t offered before. I’m also really looking forward to dyeing a special colorway for the show inspired by Rhinebeck itself. Visiting in the fall is one of my favorite things and I’m really excited to translate that feeling into color.

I was actually a crocheter first. My mom taught my sister and I to crochet when we were in elementary school and I eventually got the hang of it but didn’t stick with it. I later learned how to knit by using a kids learn to knit kit from AC-Moore that I was given for my birthday. I would take my knitting to school with me in my backpack and then knit on the bus on the way home. YouTube didn’t exist back then so unfortunately I was wrapping the wrong way so all of my stitches were twisted — something I’d find out years later after my mom learned to knit, too. 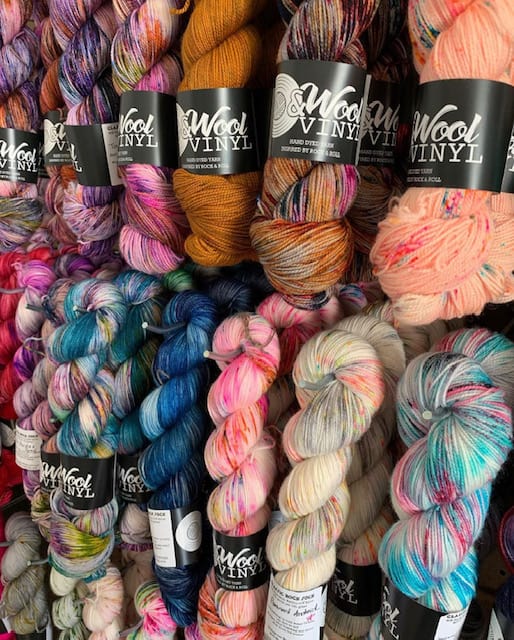 The collection of socks my customers have made is absolutely INCREDIBLE. There are so many different patterns that they’re all unique. I also tear up everytime someone makes a sweater out of W&V. Sweater knitting can be such a huge goal for a knitter and the fact that someone chooses to use W&V for a sweater always blows me away. Another favorite customer project is an Outline Tank By Jessie Mae in my Blink-182 colorway. The way that the yarn pooled in the finished garment is stunning.

What’s currently on your needles?

I don’t always have time to knit as I also work full time as well as dye for W&V but I’ve been working on a Parallelolamb by Stephen West using eight different W&V colorways.