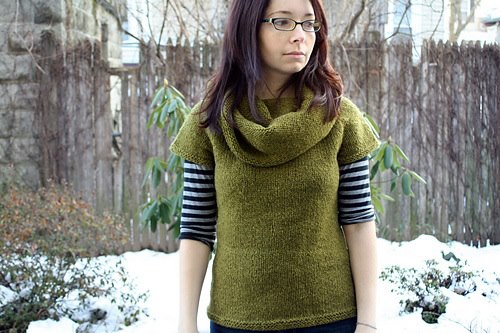 Skeinny Dipping was one of the first yarn companies to advertise on Indie Untangled, way back in 2014. I was smitten by Christine’s glowing colorways, particularly her rich reds and complex browns and greens (and I am generally not a brown or green person) and learned a little more about her when she vended at the first-ever Indie Untangled Rhinebeck Trunk Show that same year.

Christine’s background includes working in East Africa with the Peace Corps, which has inspired some of her colorway names (Malaria Dreams and Vervet), as have SNL (I Need More Cowbell and Space Pants) and food (Brown Butter and Blue Raspberry Slurpee).

When she’s not dyeing or traveling around the world with her husband and their adorable Chihuahua, Gracie, Christine knits incredible colorwork sweaters. Her yarn is currently available in the Indie Untangled Virtual Trunk Show.

Dyeing yarn was never on my radar. Like many dyers I had gotten to a point in my life where the normal job wasn’t possible and I had to find something to do.

What did you do in the Peace Corps?

I was an agroforestry extensionist in the Peace Corps. This was my primary assignment through the Kenyan Ministry of Environment and Natural Resources. I worked with other local Kenyan extensionists in my location (similar to a county) providing technical assistance to subsistence farmers in my region.

My area of expertise was agroforestry, which is a multi-purpose land use system that promotes fuel wood security and improved crop yields on subsistence-sized plots. Together with my Kenyan counterparts we also addressed water and sanitation issues, health education (such as HIV prevention) and any other issues that farmers encountered. I also had some secondary projects like teaching how to bake without an oven, which was a project that happened by accident.

What inspires your colors?

Sometimes it’s a word or phrase that inspires the color (Space Pants from SNL). Other times, it’s the parasitic diseases of tropical Africa or the nut sacks of Kenyan monkeys (Malaria Dreams and Vervet). If it’s disturbing, I’m pretty sure I’ll get a good colorway out of it.

I’m proud of them all in their own way, but my favorites are the ones that glow even though they’re extremely saturated and dark. Those take a lot of experimentation to get right, and I have to redo the recipes for each base since different fibers take the dyes differently.

My favorite color has always been green, and there were a lot of colors I didn’t like before I became a dyer, like yellow and red. But I found that I started to like them if I could get them murky and saturated, so I’ve come around to those colors. I still don’t like pink, though, except for Adobe Wan Kenobi, and that’s only because I’ve pushed that colorway to the line between coral and red. I love gray and black, too.

My grandmom first taught me to knit when I was seven. I only knew the knit stitch, and I had some horrid pink acrylic from Woolworths. Like a lot of kids, I was interested for 10 minutes and then put it aside till I was much older. I picked it up again during my pre-service training in the Peace Corps. We get three months of intensive training in-country before our service officially begins, and it was during this time that our trainers encouraged us to develop another hobby other than reading. We managed to cobble together the rest of the knitting basics like casting on and binding off from within our group. I made a lot of scarves and potholders until the next extension group of volunteers arrived. There was a hat knitter in that group and luckily she was based near me, so I learned how to make Anna Zilboorg’s hats. Aside from when I was in grad school and working full time, I haven’t stopped knitting since then.

I cannot dye less saturated colorways to save my life. I do have Salt Marsh, Zingbat, Vintaged and Blue Raspberry Slurpee but I hated all of them when I came up with them. But everyone else liked them, so they got to stay.

What are some of your favorite projects that you or your customers have made with your yarn?