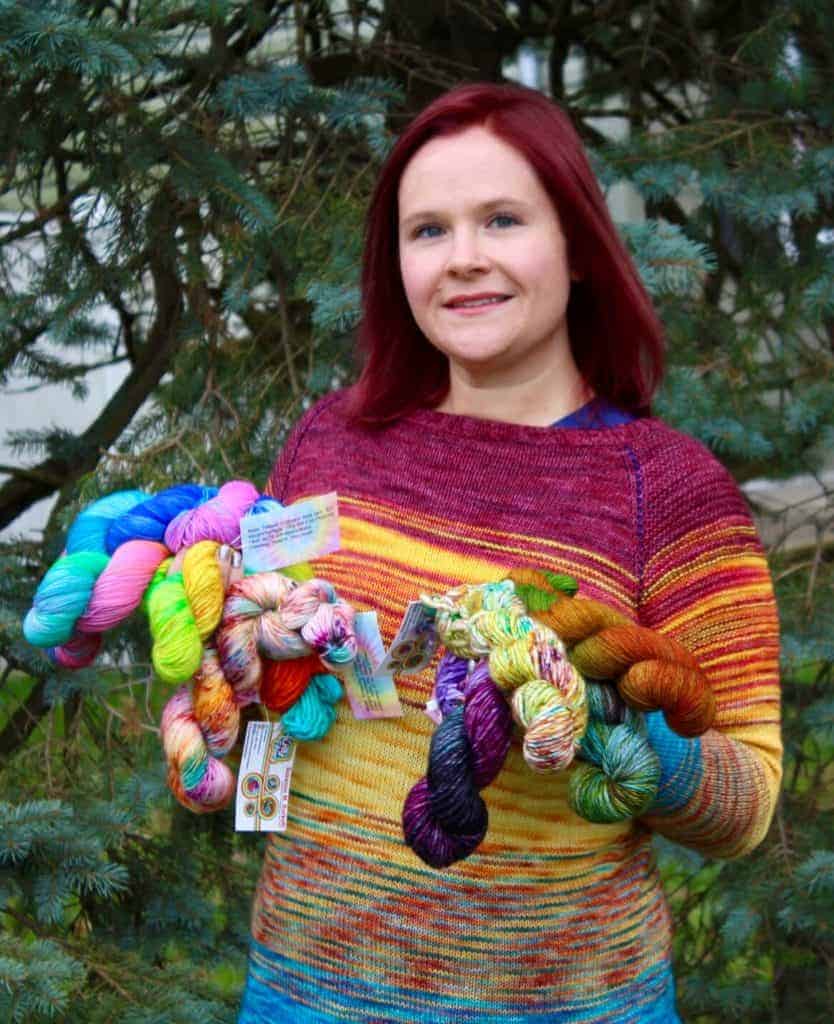 This is the ninth post in a series introducing the dyers who will be featured at the second annual Indie Untangled Trunk Show at Woolyn Brooklyn, taking place December 1-3.

Suzanne of Groovy Hues Fibers is a dyer based in my old stomping grounds of Long Island and she is a great example of what I love about my hometown (well, home land mass): friendly, funny and talented. Her colorways are random in the best possible way, inspired by things like movies and snarky phrases, but they are always colorful and Fun.

I think that my story is probably a little boring, because it is a version of the same story you hear from indie dyers over and over again! I taught myself to knit at the ripe old age of 25. It was during a brief time when I lived in southwest Florida, and there wasn’t much of a choice for yarn in general, let alone colors I preferred. This was before the popularity of Facebook crafting groups, but a Google search led me to discover that one could dye bare wool with food-safe coloring. I was hooked.

Then, life got in the way as it is prone to do, and I didn’t dye or knit for a long time. I met my now-husband in 2010, and he is an archaeologist specializing in textiles. He gave me a bunch of his natural dyes, and he taught me to spin. I picked up knitting again, and my first trip to Rhinebeck inspired me to try some acid dyes.

One day in our knitting circle, a woman grabbed a skein from my hands and demanded to know where I’d gotten the yarn. I told her I had dyed it, and she thrust some money in my face and begged me for it. How could I turn that down? I was working five jobs and could barely make ends meet. Several months later, my then-boyfriend-now-husband and I were at a beer, bacon, and bourbon festival held on the same fairgrounds as Rhinebeck, and the food-and-alcohol-induced idea came from Thaddeus that I should try to sell some yarn. I thought he was insane. I still do, but now for different reasons!

Up to that point, I had fully planned on trying to pursue a PhD in Biological Anthropology. He was already almost done with his PhD in Archaeology, and I had only done a little bit of fieldwork with monkeys in Costa Rica and Nicaragua. It was fun, but I did genuinely long for a “normal life.” (Little did I know that being a dyer is anything but normal!) I bought some extra dye and extra yarn, and there it sat. For months. I was petrified that it would fail. Several months later, I mustered the courage to post some extremely terrible photos of my yarn (I hadn’t learned to photograph it yet!) in a few Facebook groups, and people wanted it. Not quite six months after that, I was able to quit the other four jobs and work on Groovy Hues Fibers full-time! I haven’t looked back! 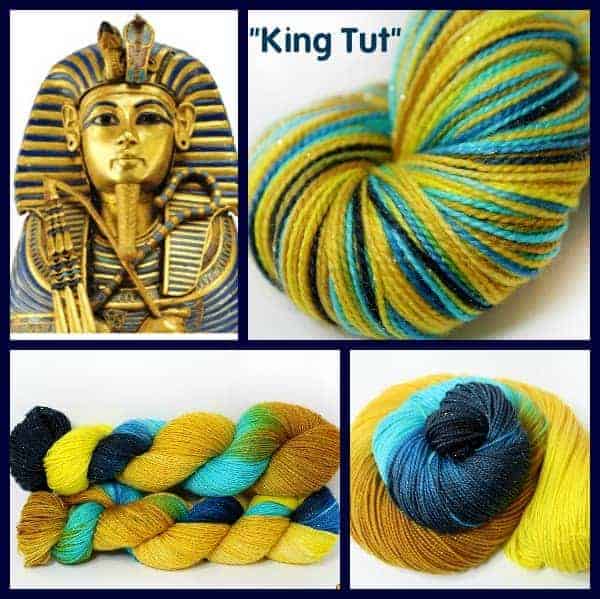 I’m weird. There is absolutely no question of this. When you see my colorway names, most of them are pretty fun. I have puns, I have movie quotes, song titles, television show themes, snarky phrases, and much more. Sometimes I have an idea in my head and take the dye to the yarn, but most of the time I dye the yarn and then try to figure out what it says to me. I love food-inspired yarn, because I live to eat. My husband and I plan fiber show vending based upon how good the breweries and restaurants are where we will be selling! I can’t lie — I do have several mundane, boring colorway names. If you see a boring name slapped on my yarn, you know that the yarn was named sometime around 2:30 in the morning the day of a fiber show, as I panicked and tried to get it all done in time!

My business name is Groovy Hues Fibers – we embrace the rainbow, and every color under it. I try to give equal attention to the insane, psychedelic brights as I do the earthy, tree-hugging tones. That said, I personally love orange. It’s a happy color. I tend to dye a lot of it, and I’ve been told that I do it in an inoffensive way, whatever that means! Ha! I am not a fan of hunter green — I have my reasons. But I force myself to dye it for those of you who do love it. As I’ve grown as a dyer, I personally have gravitated to making things for myself that are less bright, and more earthy. I noticed this at a few of my latest shows, so now I have to revisit the idea of putting brights out there for everyone else again. Not everything can be selfish dyeing. Or can it???

Is there a color that you would love to dye, but that you find is challenging to create?

I think a lot of things are challenging to create. The perfect gold and the perfect green. Many people have ideas of what these colors should be — I know that I have my own set attitude about them. It’s often hard to translate something from my head onto the yarn, because you never know exactly how the fiber and the mixed dyes will marry. Mostly, I do what I want. I work very hard at it, and I put everything into creating a skein that I’d be proud to use. If the colors are giving me trouble, I overdye them and pretend that I fully intended for them to look exactly the way that they did! Sometimes what I thought were my worst dye days turned out to be the biggest sellers I’ve ever created. 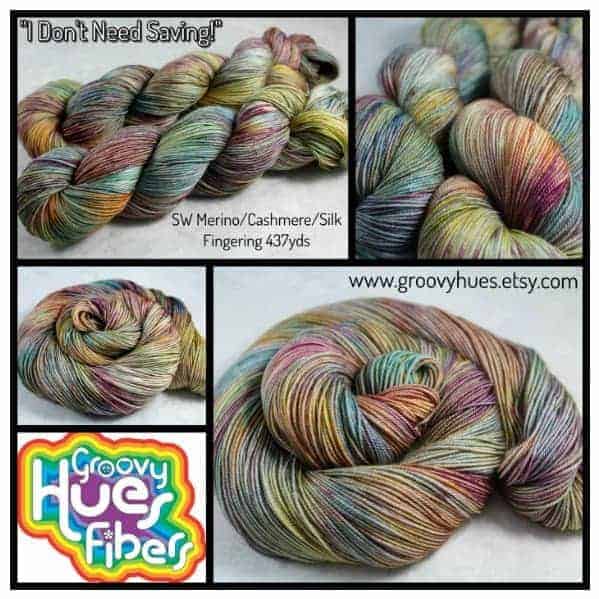 How often do you update your online shop?

That’s a really good question! My only answer is, “whenever I can.” Some people can say they’ll update every Saturday night at 8 p.m. I have no such delusions of that kind of organizational skill. I do a lot of fiber and trunk shows, so during the spring and during the fall, I update the shop sporadically as I usually hoard inventory for these events. During the summer and winter, my online customers see a lot more updating from me. There are days I’m so excited by what I’ve dyed, that I update the shop as soon as the yarn is dry and I can take the pictures. I try to never keep the shop entirely bare, because that looks sad to me! The days of less travel are upcoming, so I plan to have far more yarn available for my online Groovies.

Is dyeing your main business, or do you have another job?

As far as making money goes, dyeing is my only business. But, last year, my dog died suddenly and unexpectedly. To get out of my own head, I took up running. For some crazy reason, I kept on doing it. Most of the time, I feel like that is a job! I’ve been training for several big races. In March 2018, my husband and I will be running the Rock ‘n’ Roll 1/2 Marathon in Washington DC under the Groovy Hues name as St. Jude Heroes — we’ve raised almost $3,000 from customers and friends for St. Jude Children’s Research Hospital! This coming weekend, I’ll be completing at 10K in Central Park for the Save The Elephants foundation. On Thanksgiving, we have chosen a Turkey Trot 5K to benefit the Nissequogue River State Park Foundation. I suppose I have settled for a second job in charity! If I were to name a third job, it would be dyeing yarn for my husband. He is the designer for his growing brand, Archaeology Knits Designs. When you see gorgeous designs in my booth, chances are that he is the one who designed it. I’ve designed exactly one thing, and I hated doing it. I’m done now. As long as I keep him knee-deep in yarn, he’s a happy dude. 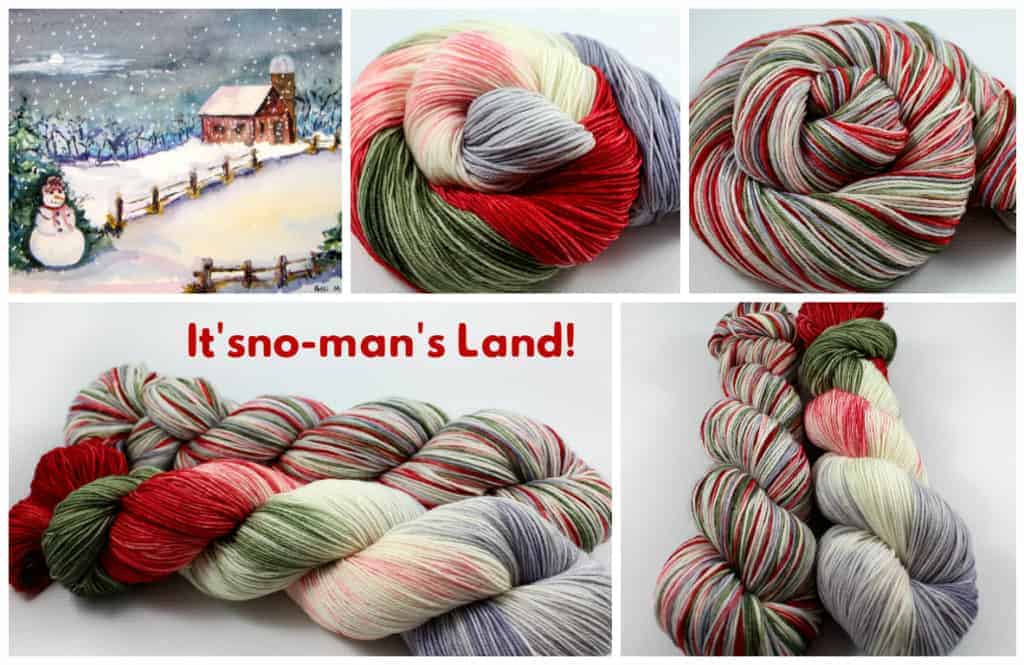 What are some of the best things you’ve learned running your fiber business?

Honestly? To do mostly what makes ME happy. If I try to chase after every yarn trend to fill whatever the Ravelry pattern du jour is, it will be inconsistent and people will not know what to expect from me. If I do what I love, then chances are, someone else will love it, too. I do speckle yarn. I do make yarn for fades, and doodlers, and whatever everyone else wants to make — but I do it my way.

I’ve also learned to never scoff at any application of the fiber arts. I don’t believe in yarn snobbery. If someone comes into my booth and he/she has only ever worked with acrylic and needs help, I help them. Even if they don’t buy from me. I am all about keeping the fiber arts alive — that’s what’s most important to me.

I’ve also learned that we can never know what people want. I can dye a colorway that I hate, and it will sell out at a show. I can dye something that, on paper, should sell in seconds, and it goes untouched for several shows! Not knowing what to expect keeps it fresh.

One of the biggest things I’ve learned about owning a business is that I absolutely have to make time for myself, or I will begin to resent that which I’ve worked so hard to build. Taking more than a week off to get married and go on a honeymoon was really, really hard for me this year — but I’m so glad I did it. I came back with a refreshed love for what I do.

Lastly, I’ve learned that I can sell all of the yarn in the world online, but it doesn’t make me as happy as when I am vending at even the smallest of shows. Meeting with people and watching them touch my products is the most satisfying feeling in the universe. I love watching people buy things that sing to them. It reinforces that I made the right decision in life! Playing with dye and chatting with fiber crafters is so much better than examining monkey poop in the jungle!