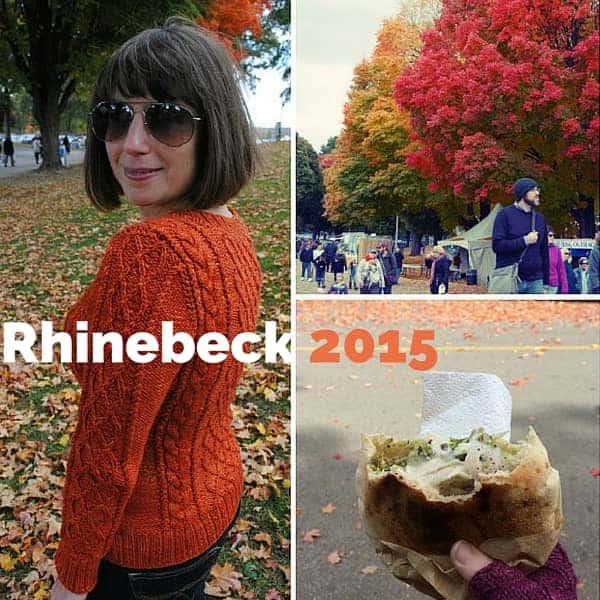 You would think that every year, the NY Sheep & Wool Festival would feel a little bit Groundhog Day-esque. In some ways it is — there’s that same wind instrument playing in the background, the same blazing trees, the same Jennie the Potter line. But, each year, my Rhinebeck experience is always a bit different. I go shopping with different friends, or try a new edible treat.

This year, I spent the Saturday of the festival with my mom, who had come up from Long Island to help me with the trunk show. It was also her first Rhinebeck — she was supposed to go with me my first year, back in 2011, but there was a change of plans. My mom is a knitter (we actually started to learn around the same time, and I became much more obsessed than she did) but she hasn’t moved much beyond rectangles. She is, however, interested in getting back into weaving, which she learned in college when she was studying to be an occupational therapist. With that combination, I saw Rhinebeck with somewhat new eyes. Usually, I don’t stop in every booth, since I did that my first year and because I have an idea of which I want to hit. But, without the frenzy of waiting for a Jennie the Potter mug or making a beeline to Miss Babs, I got to see some beautiful woven products, smell wonderful soap and admire the pretty baskets that I usually passed on my way to Dragonfly or Melissa Jean.

I also took advantage of my mom’s enabling. I ended up stopping by the BeadBiz booth, which is relatively new to the festival, and my mom convinced me I should try a project with beads. So, I picked up a set of beautiful purple and golden ones, which you’ll see in the haul photo below. Then, a short time later, when I headed to the Merritt Bookstore booth to get my copy of Pompom Quarterly, I saw the most beautiful sweater sample — with a beaded neckline (Cicely by Jemima Bicknell). It was fate. 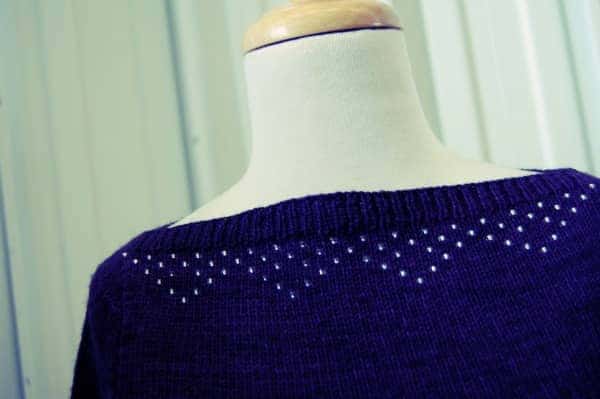 We also caught a sheep auction, waited in epic lines to get artichokes French (which I passed over last year in favor of quicker pierogi) and apple cider doughnuts, which my mom agreed were worth the wait. She also made the smart decision to share a half dozen, and I ended up bringing the third one with me the next day, so no need to stand in yet another line. 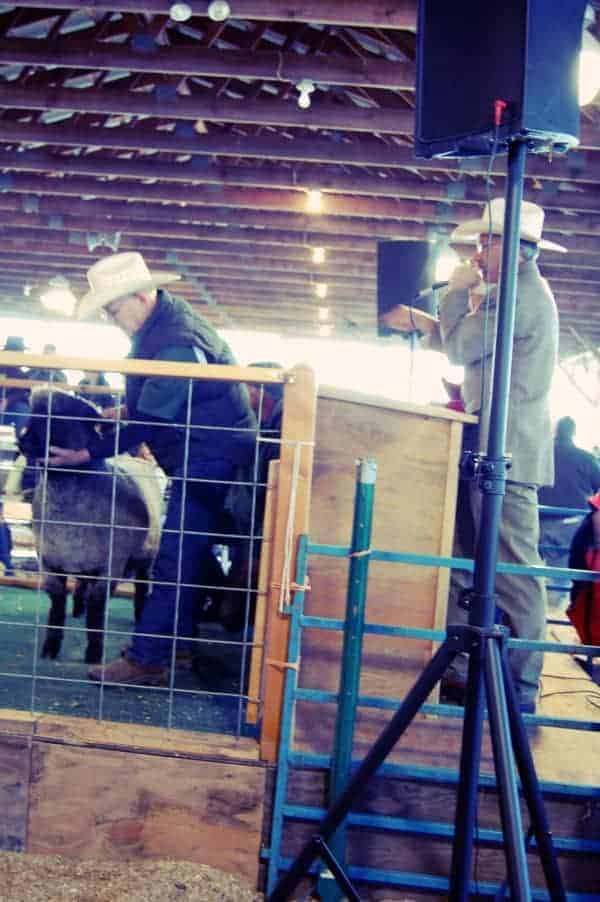 The next day, I spent mostly with my friends Dorothy and Jillian, and we started off with a stop at Taste Budds, so I finally got to try their famous chai, which was every bit as delicious as I had hoped. While I had eaten some breakfast at the hotel, Dorothy, and then Jillian, and then I decided that 11 a.m. was the perfect time to try the famous falafel, without the lunchtime lines. Perfect brunch. 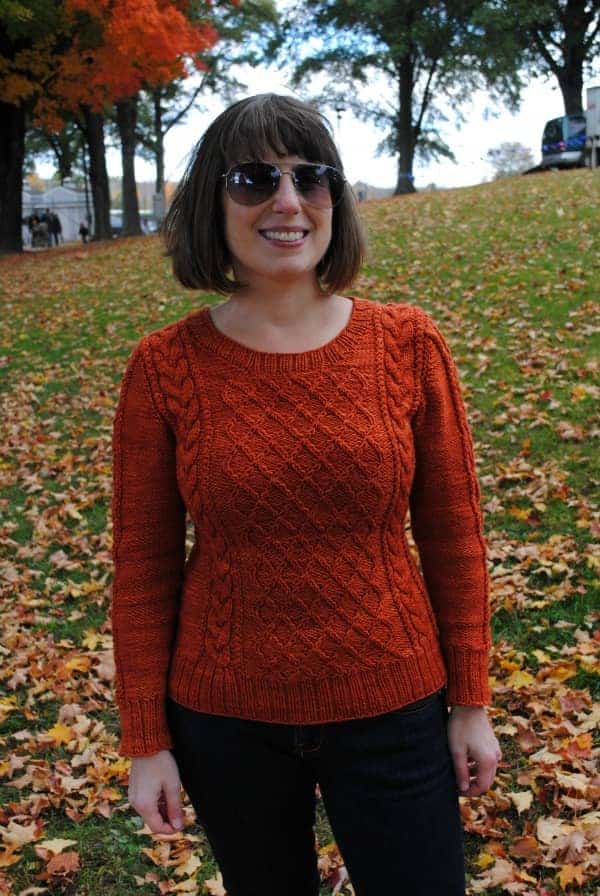 Of course, no Rhinebeck would be complete without a Rhinebeck sweater, and this year I had two! On Saturday, I wore my West End Girl, a pattern that my friend Yelena put out earlier this year. I knit it out of Jill Draper Hudson that I purchased at this year’s VKL NYC, in a colorway that just screamed Rhinebeck — and was completely out of my color comfort zone. Leave it to indie dyers to expand my horizons! On Sunday, I wore my Rhinecliff, a pattern by Laura Aylor, with Miss Babs Heartland I had purchased two Rhinbecks ago.

I made sure to set up a time in advance with Connie, LemonTango on Ravelry, for a quick photo shoot of my West End Girl, since I love her FO photos. While waiting, I documented the Tosh Stalkers rainbow photo shoot. 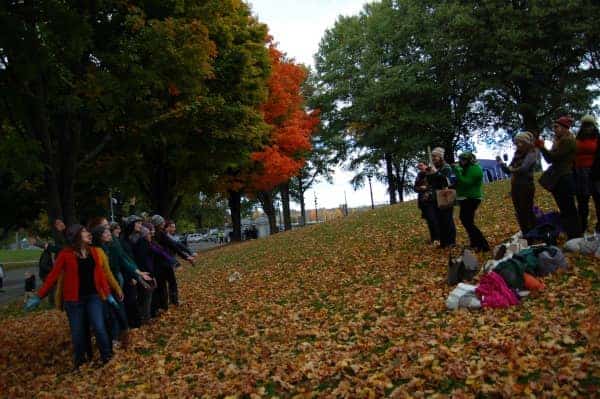 And had fun taking artsy snaps with my DSLR. 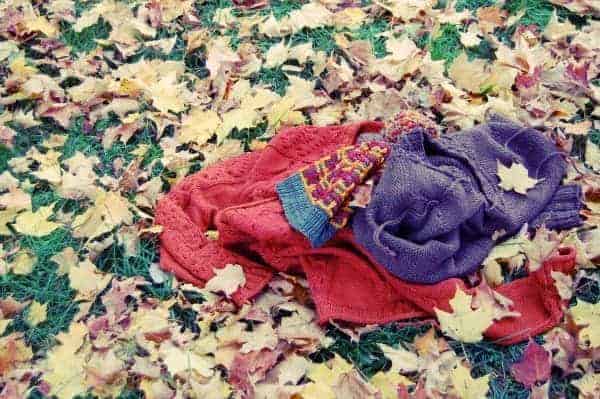 Aside from the beads and copy of Pompom, my actual Rhinebeck haul also included two skeins of Dragonfly Fibers Dance Rustic Silk, which will make a lovely tee, as well as a felt bag by Julia Hilbrandt, whose products I had been admiring ever since my first Rhinebeck. My mom agreed they were beautiful and decided to get me one as an early Hanukkah present. I also stopped by the Jill Draper open studio on Saturday night, and while I thought I might pick up some of her Mohonk Cormo, I ended up with four skeins of Rockwell to make Thea Coleman’s new sweater design, Dobbs Ferry. Thea was there wearing the sample and even helped me pick out colors (which included another very unlikely Lisa pick of green). My mom was the one who convinced me that I had to make it — I guess enabling runs in my family. 🙂 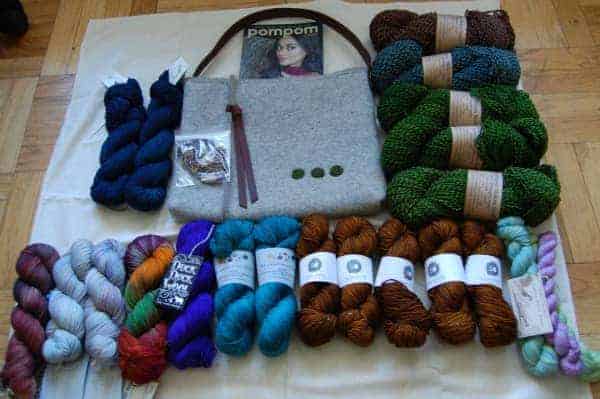 4 thoughts on “Another year, a newer Rhinebeck”