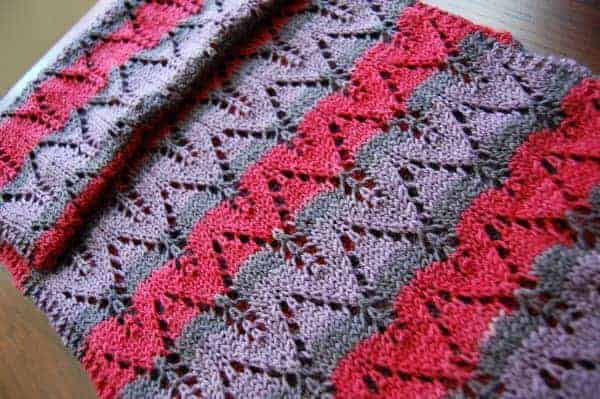 I’m not a sock knitter.

I certainly don’t have anything against handknit socks. The one pair I have, which a friend kindly gave me during a purge at Rhinebeck of FOs that she no longer used, are a godsend in the winter. I will probably knit a pair someday, but, for now, I enjoy making things that are more easily show-offable.

Which is why, when I approached Michelle of Berry Colorful Yarnings about a project using her self-striping sock yarn, I knew I wanted something that a non-sock knitter like me would want to make, so her beautiful colors wouldn’t get lost under my boots. Michelle had collaborated with designer Lara Smoot before on the Despicable Socks made with Michelle’s Despicable Me self-striping yarn, so we looped her in and tasked her with designing a lacy infinity scarf using a pattern that showed off the stripes.

“I do love to make self-striping yarns,” Michelle said in a recent Ravelry post explaining her dyeing process. “The idea that I have an infinite set of color combos is the biggest thrill to me. I have made the stripes on my yarns wider then the average stripes so that the knitter is not limited to just socks for their project. I love to knit hats and cowls, and these wide stripes will stripe up very nicely in both types of projects. Some knitters have made smaller shawls and several baby sweaters… Although they rock in socks, too.”

I knew I wanted to offer Michelle’s Indie blue colorway, which she dyed up as part of a giveaway after the site launched last year, and which also sold out at the Indie Untangled booth at last year’s Rhinebeck trunk show. We also decided on two others: Cafe au Lait and Berry Pie.

Test knitting commenced after Maryland Sheep & Wool, and I decided to knit mine in Berry Pie, which I’ve had my eye on since spying it in a Facebook post, but I was waiting for project inspiration to strike — which it did, in Lara’s Untangling scarf. The lace pattern was perfect: just complex enough to keep my interest, but easily memorizable, which was great because I took it everywhere. The only snag I ran into was when I unzipped my provisional cast-on, which was a crocheted cast-on where you knit into the back bumps of a crochet chain. I think it would have been easier if I had done Judy’s Magic Cast-on, which leaves the stitches on a needle or stitch holder instead of waste yarn. But, I persevered, and rocked the kitchener stitch (this video is a godsend to help you memorize it). 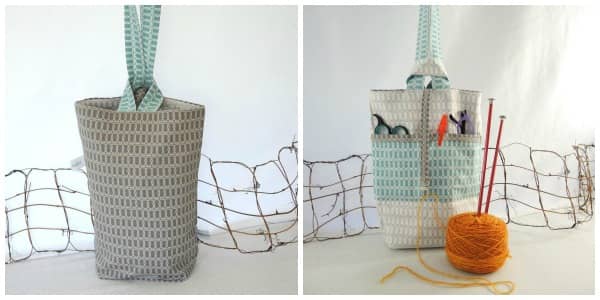 I also knew we needed a project bag to tie this all together. So, I of course called on Vicki Moss of That Clever Clementine. Even as a fairly monogamous knitter, I never have enough project bags and I’ve always loved Vicki’s, ever since I got one of her drawstring Belle bags with a beautiful New Orleans map fabric in the coveted Jackson Square shawl kit she collaborated on with Margaret of French Market Fibers and designer Beth Kling. Not to mention the yarn ball bags Vicki created in honor of Indie Untangled. The lined bags are so well made, keep my projects safe and I feel like I make a fashion statement whenever I carry around my knitting.

I knew I wanted a different kind of bag for this kit, so we all scoured fabric websites (honestly, I’m so glad I don’t seriously sew, because I’d be spending a lot of money at Hawthorne Threads) and eventually agreed that the beautiful loop fabric, in complementary colors of grey, white and aqua, would perfectly represent the Untangling theme we had come up with — and as a bonus, it works really well the loop-handled bag.

Orders have been steadily coming in for the kit since they went on sale earlier this week, and you have a chance to snag one of your own until the end of the day Sunday, June 21. I’m so proud of this collaboration, which will be the first of many indie exclusives that I will be enabling you wit–, erm, bringing you through Indie Untangled.