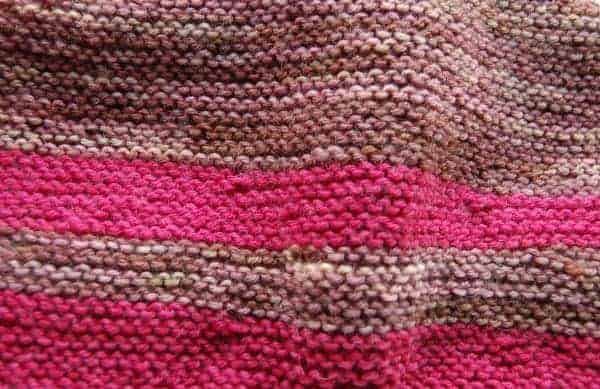 I’ve never really been the type to make New Year’s resolutions. If I resolve to do anything, I tend to just pick a date and do it, like deciding to start working out again (constantly sitting at a desk wasn’t doing me any favors) or reorganizing my stash (well, more like finally putting my Rhinebeck purchases away… in an entirely new box).

My knitting resolutions have been similarly immediate. On Christmas morning, I was trying to decide what to knit while I wait for new yarn for my mom’s hooded scarf. I so wanted to try out the Quince & Co. Lark that the pattern called for, but as I started knitting with it, I decided it was a little too rough for wearing around the neck. My husband, who wears his Bugga! scarf much more than his Brown Sheep Lamb’s Pride one, felt the WIP and even agreed that it was a little rough (and I hate to sound stereotypical, but if your husband is encouraging you to buy more yarn…).

Anyway, I was looking at my project page, and realized I had a project that’s been hibernating since 2013. It was the Scalene that I cast on for on the way back from Australia (the yarn is from Rhinebeck 2012), and then messed up the increases for while knitting during a VKL class. Every time I pulled it out of the closet, I resolved to finish it. This time, I decided to repurpose it. So, I frogged the quarter-done shawl and cast on for Amy Miller’s Pendulum. greentrianglegirl, AKA A Playful Day, had called it a soothing knit, and she was right. The mindless garter is perfect for this more relaxed time of year, and the short rows keep it interesting. I probably won’t finish it in time for the Indie Untangled Winter KAL (which you still have the rest of today to enter. Read: PRIZES), but this is something I don’t really need to rush.

I could have cast on for the Myrtille shawl as part of the Swiss Delights KAL with the Siidegarte kit, but it starts on Jan. 6, so I figured I would be good and wait. I made this my own Hanukkah splurge, and I’m so glad I did. The yarn, which arrived really quickly for an international package, is lovely and silky, and I can’t help but take it out every now and then to admire it.

Speaking of 2015, there are also some really cool things happening knitwise early next year. First off, some really exciting news about Gauge + Tension: On Feb. 7, Michele is moving the former pop-up shop to a permanent space inside the Brooklyn Craft Company! This is a crafting space in Greenpoint with all sorts of different classes (they also have knit wallpaper they designed themselves!) and I keep meaning to go, so hopefully this will give me the kick in the butt I need.

Michele has also been organizing some really fantastic trunk shows (I really wanted to attend the Jill Draper and Queen Bee Fibers events, but I had my friends from Italy in town and then I had to work. Sigh.). If you’re Plucky obsessed, then you probably already know about the Plucky Knitter trunk show taking place at the old G+T space on Saturday, Jan. 24. Then, the next day, the store is going to be filled with yarns from Miss Babs (but, alas, no Babs herself).

If that’s not enough, on Jan. 25, Maria from the Subway Knits podcast, along with Sarah of KnitYorkCity, Kristin from Yarngasm and Marsha from One Geek to Craft Them All, are speaking at a panel on yarn crafting and blogging, organized by the Brooklyn Knit and Crochet Guild. It sounds like an amazing weekend! And that’s not even factoring in that Vogue Knitting Live is the weekend before.

I think I need to resolve to make another trip to The Container Store.