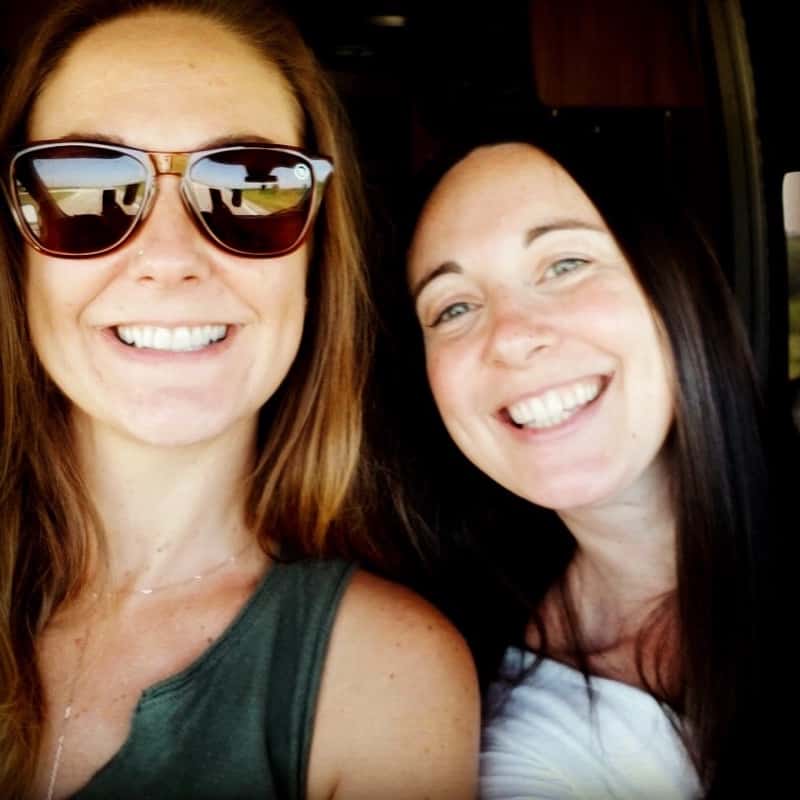 This is the third in a series of blog posts featuring the fabulous sponsors of the 2018 Rhinebeck Trunk Show.

You may know designer Melissa Kemmerer by her adorable sheep-y sweaters. You may not know that she and former yarn shop owner Becky Beagell are creating a new knitting magazine, called Nomadic Knits, that will focus on local regions and feature indie dyers, producers and designers. Their first issue, which will look at the knitting scene in Florida, is set to be released in the coming weeks.

How did the idea for Nomadic Knits come about?

Becky loves to travel, and recently sold her house and closed her yarn shop, The Glitter Ninja, to explore the country in a van with her poodle, Bubba. Melissa loves knitting and has been designing for several years. We wanted to find a project that could incorporate both of these passions while allowing us the freedom to expand the idea and grow with it as we discover new possibilities. There may have been a few cocktails involved as the original idea came to life.

Aside from designs, what will the publication include?

Each issue will feature local dyers or fiber producers, as well as articles about the local knitting scene and some interesting finds. The Florida issue includes information about fibers that are great for knitting in warm weather, a cocktail made with local ingredients, and tips for knitting on the beach.

Why did you decide to focus on Florida for the first issue?

Both of us happened to be spending last winter in south Florida, not far from each other, and we wanted to share all of our knitting fun with the rest of the fiber community. We also wanted to correct the misconception that no one knits in Florida. It’s actually full of amazing dyers and passionate knitters!

Can you reveal what regions other issues will focus on?

Our second issue is focusing on New York, specifically upstate (everything north and east of NYC), where we both grew up. After that, we have plans to explore the southwestern United States. From there… the world!

Melissa: My aunt taught me the basics when I was 16, and after a year of garter stitch scarves, she introduced me to patterns and how to read them.

Becky: After a few failed attempts at learning from family members, I taught myself to knit on a circular loom. Then one day I decided it was time to learn to use sticks and I grabbed a copy of Stitch ‘N Bitch by Debbie Stoller, and I was off and running. Or knitting.

We both LOVE shopping for craft supplies, a hobby in itself! Melissa dabbles in cross-stitch, and wants to learn more advanced embroidery and basic sewing. Becky is your standard maker, trying anything she can get her hands on.

Melissa: I crocheted an enormous acrylic blanket while I was in college. It took me about four years to complete it, as it was entirely in single-chain, and I only worked on it sporadically. The tension changed from year to year, and one end is loose and wonky, while the other end is so tight, it’s almost bullet-proof. My dad proudly displays the blanket on his couch, and I have never crocheted another thing.

Becky: A few years ago I made what I thought was going to be a trendy, chunky sweater. It became lovingly known as the Wooly Grimace at The Glitter Ninja. Does anyone remember Grimace, the McDonald’s character? Anyway… it was LARGE and purple and ridiculous. It probably weighed about forty pounds. We kept it around for comedic relief and threatened to make grumpy knitters wear it during knit club.

Where are each of your favorite places to knit?

Melissa: In theory, I love to knit outside, soaking up the sunshine by the pool or on the beach, but in reality, I can usually be found knitting in a cozy chair, binge watching Netflix.

Becky: I love knitting in the car. Unfortunately, Bubba can’t drive, so I usually only get to do that while Melissa and I are on yarn tour and she’s at the wheel. Qualified drivers, feel free to submit your applications.