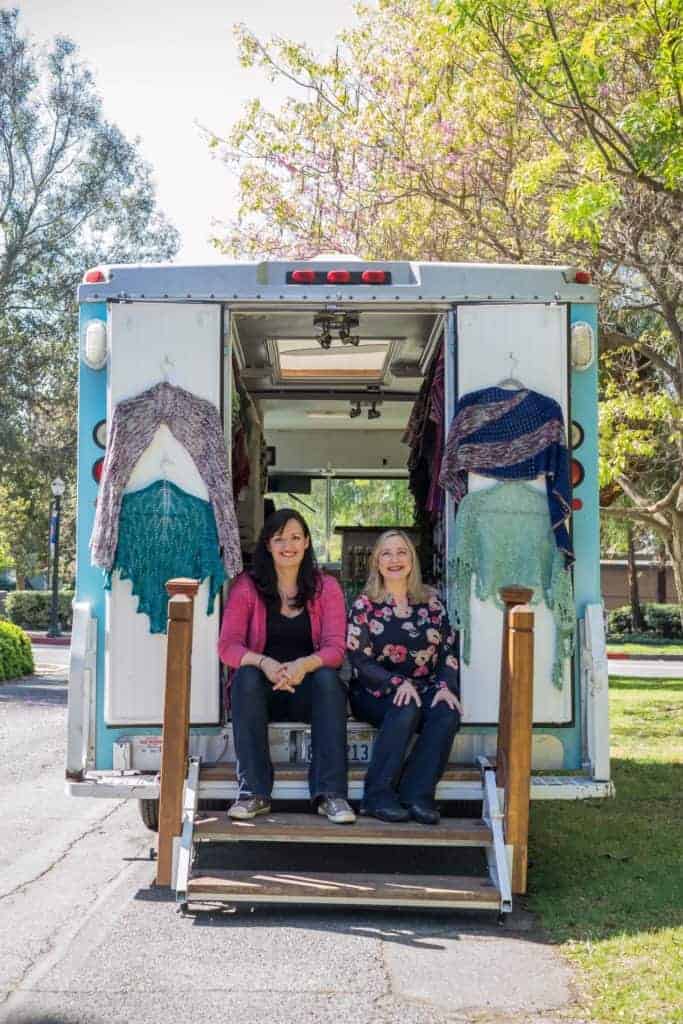 This is the fourth in a series of blog posts featuring the fabulous sponsors of the 2018 Rhinebeck Trunk Show.

There’s a meme I’ve seen floating around social media about how great it would be to have a truck that would drive around your neighborhood ringing a bell and selling yarn. Well, the Yarnover Truck is that meme come to life.

Based in Southern California since 2013, the Yarnover Truck is the brainchild of Barbra Pushies and Maridee Nelson, two knitting friends who realized the dream of owning a yarn shop with a unique business idea. They outfitted a former Little Debbie snack truck with cubed shelving and offer a large selection of indie dyers, including several who post on Indie Untangled, and set up shop at breweries, parks, fiber festivals and special events. I had the pleasure of visiting a few years ago and it was everything I dreamed it would be.

Tell me how the idea for the Yarnover Truck came to be.

Barbra and Maridee were friends from a knitting group. One night at group, Maridee mentioned she was thinking about opening a yarn store. She had a name and a location all picked out, but the financial realities of a brick and mortar yarn store seemed overwhelming.

Later that week during her weekly knitting class at work, Barbra brought up her friend’s yarn store idea. It was always a dream of Barbra’s too, but like Maridee, it always seemed just out of reach. One of the members of the knitting group suggested a yarn truck and immediately Barbra was enamored with the idea. Hours of Google research on mobile retail business and one overwhelmingly long email to Maridee later, they found themselves on Melrose Avenue in Hollywood talking with one of LA’s first mobile boutiques. On July 5, 2012, the idea of the Yarnover Truck was born and the Truck launched March of 2013.

What did each of you do before you became yarn shop owners?

When we started the truck both of us were working in the entertainment industry. Barbra had worked in animation production management for Walt Disney Studios for seven years. She was lucky enough to assist with the knitting portions of Disney’s 50th animated feature, Tangled and on the Winnie the Pooh movie. Both Rapunzel and Kanga were “taught” to knit by Barbra.

Maridee worked in marketing for a variety of different companies in Minneapolis (where she grew up) and in Los Angeles, most recently working in theatrical advertising for Warner Bros. Studio for many years on many popular movie franchises. Jumping in to run the Yarnover Truck full time felt very natural taking all the knowledge learned in a variety of industries and putting it into running our successful venture. 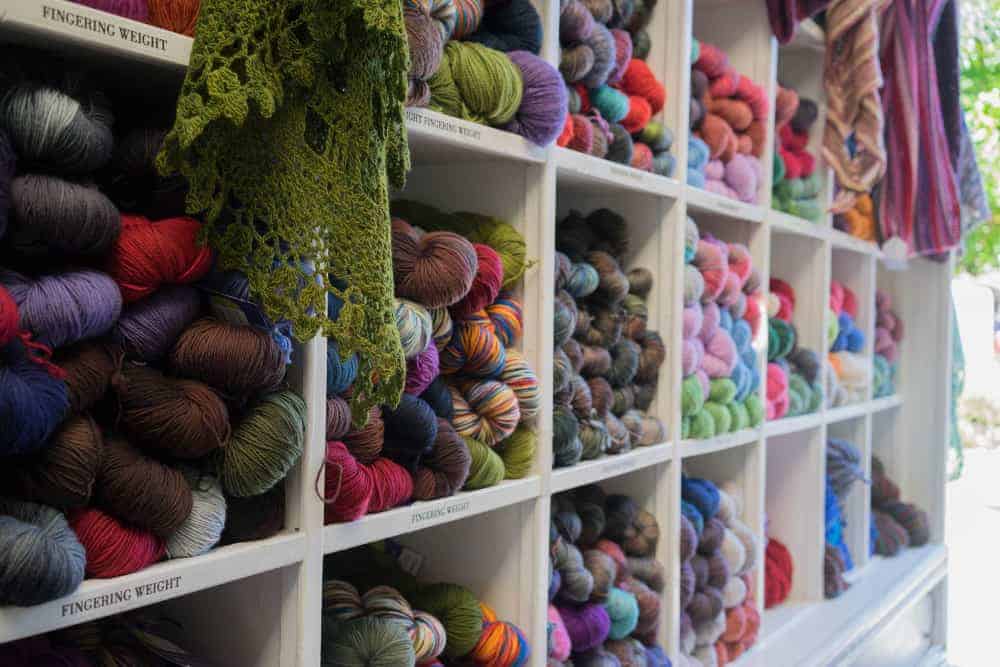 How did you choose the dyers and brands that you carry?

When we started the Yarnover Truck, indie dyeing was still growing and starting to get more popular every day. We decided to make the focus of the products we sold on the truck hand-dyed yarns and work hard to showcase as many other small companies as possible.

Our goal is to find unique and talented dyers and show them off to our customers. We try and have things on the Yarnover Truck that you won’t see in many other shops in our area. We know that shopping with us takes a bit of effort from our customers so we work hard to make it worth their while and have thing they won’t find anywhere else.

Our biggest challenge is to find locations where we can bring the truck to reach the most people. We cover a large area in Southern California going from San Diego up to Santa Barbara with visits to Palm Springs and the Inland Empire occasionally too. It’s hard to know all the best spots in such a large region so we rely on our customers who know their neighborhoods best to help us find good spots.

Our greatest rewards follows along this same storyline – we have some of the greatest customers around! We have lots of loyal yarnies who are willing to come and find us in all of the different locations where we bring the truck. They often tell us how they love to “stalk” us and to check out the new places we find for the truck.

Since you’re in Los Angeles, have you had a lot of celebrity customers?

We haven’t yet had many celebrities come on the truck and we think because we move around so much and are rarely the same spots often. We do dream of getting Julia Roberts on the truck one day and are still working our industry contacts to hopefully make it happen someday.

But being in Los Angeles, with ties to the entertainment biz has enabled us to be “knitting consultants” for a major motion picture called “Backseat.” Last fall we received a call from the prop master on this film set in the 1970s. He was looking for help to teach the extras used in the scene to knit and crochet properly and to provide some props to be included in the scene. The film is set to release near the end of this year so we won’t know how much of our work will be seen but it was a great time and definitely something we hope to do again someday! 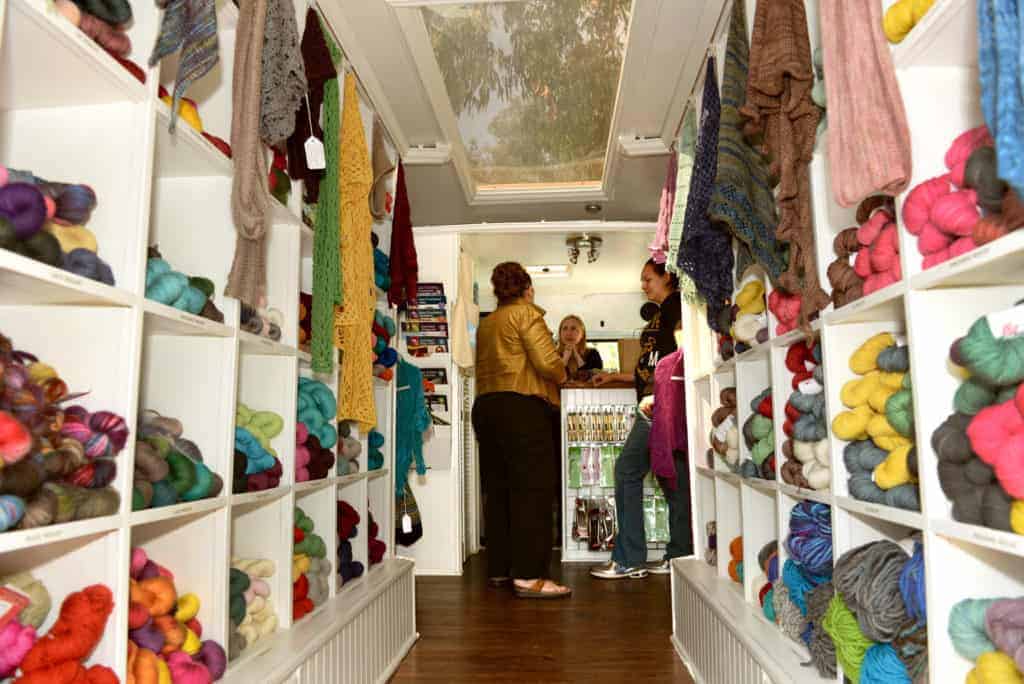 Can you talk about any new products the shop is going to carry or special events in the works?

The truck is gearing up for fall and we have lots of fun things planned. In addition to our regular schedule, we will be part of the San Diego Yarn Crawl in September featuring a trunk show from indie dyer Destination Yarns. We’ve worked with Jeanne to create a special colorway just for the crawl too.

Plus, we will be bringing the truck to the Stiches SoCal show in Pasadena in early November. We get to drive the truck right onto the showroom floor and we will be featuring the wonderful work of Dragonfly Fibers in our booth. Plus we will be launching a new exclusive color we’ve developed with Kate and her team. We love working with the talented dyers to create new and special colorways whenever we can!

Barbra is a self-taught knitter and over the years, she has worked hard to teach herself new techniques and challenge herself with large projects. Both her grandmother and grandfather were excellent knitters and Barbra always wished they had lived to see her become the skilled knitter she is today. Her favorite thing to knit is sweaters, always adding extra length for her long arms.

Maridee has been crocheting since she was 12. Her grandmother first taught her the craft as something to help pass time during an extended hospital stay. Fifteen years ago, she took up the craft again and this helped lead to the creation of the Yarnover Truck. She had Barbra teach her to knit, too, so she is a bi-stitual crafter these days 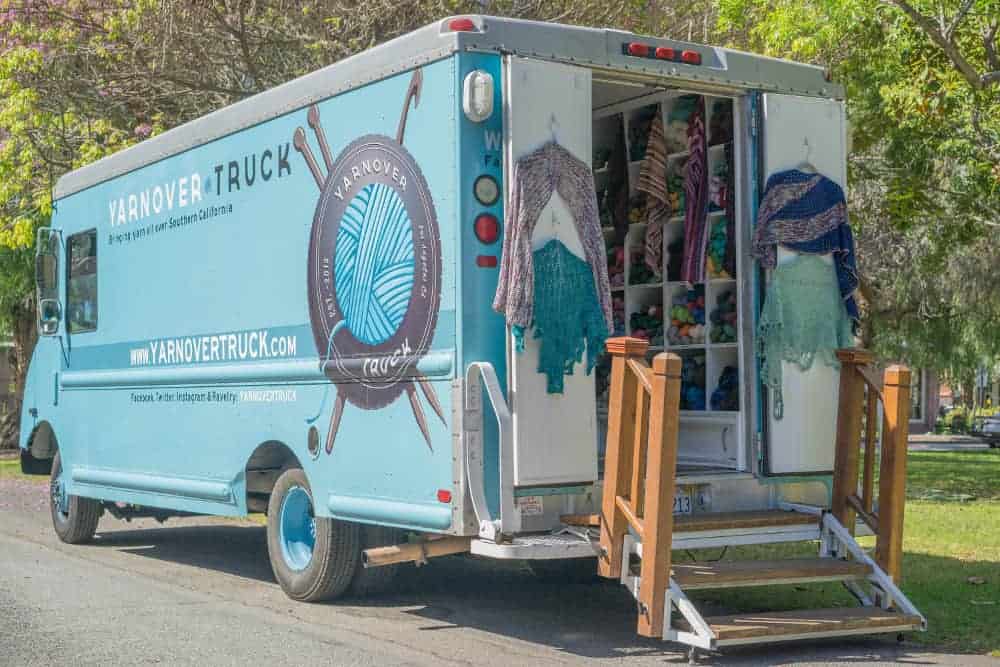 Owning a yarn shop means that most of the projects we work on are shop samples. We love being to show off the beautiful yarns we carry on the truck and know how a great sample can really help us sell lots of yarn!