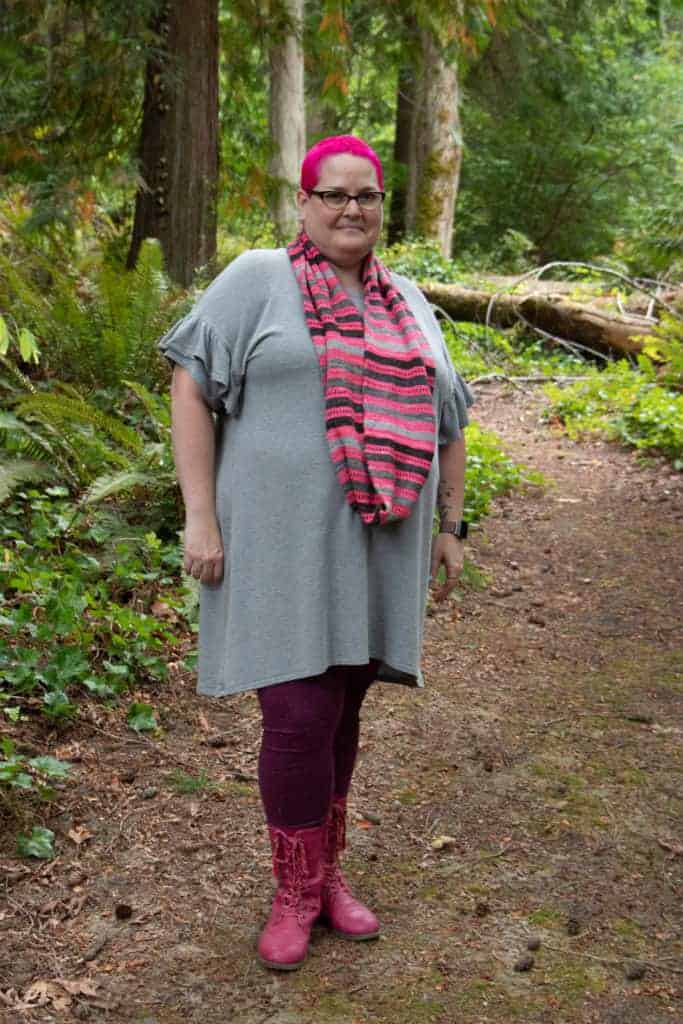 Knitting and caffeine seem to go together like, well, yarn and needles. C.C. Almon of Javapurl Designs takes that to the next level with her designs, many of them coffee related, or with a geeky twist. There’s also a bit of Gilmore Girls thrown in (again, coffee) as she often collaborates on collections with her daughter, Dami.

C.C. also often works with dyer Julia of Pandia’s Jewels, and for this year’s Where We Knit yarn club, she created two items: her Brackett’s Landing socks and cowl are now available to purchase.

I’ve always been crafty having grown up with a great-grandmother who did needlework, a grandmother who painted and sewed and a momma who did lots of crafts including cross stitch. I dabbled in lots of crafts over the years, but had always wanted to learn to knit. Why? I’m not sure. I didn’t know anyone who knit. It was just always calling to me.

So I finally answered the call in 2005 when I purchase a Learn to Knit kit from a big box store. I was instantly in love! The first few years, I knit mostly blankets and hats.

Things exploded in 2012 when I took a sock knitting class. In 2013, I released my first big pattern (Rescue Me, Chin Boy, & Show Me the Stars – a Doctor Who-inspired Socks) after I was gifted a gorgeous skein of yarn that I knew needed to be a certain pattern, but I couldn’t locate one, so I made it up.

Since then, I’ve designed 60 patterns (mainly socks, but also shawls, cowls, and a few miscellaneous things).

What did you do before becoming a designer and how does it inform your design work?

My final job before I became disabled was as a hospital chaplain. My primary unit was the Neonatal Intensive Care Unit (NICU). I desperately miss working with those wee babes and their families. As a way to continue to bless them, I designed my Top Down Preemie Hat pattern (free on Ravelry) with seven sizes from 24 weeks to full-term. Since 2014, I have knit one preemie hat each week which I then donate to a local hospital.

How did you decide to team up with your daughter, Dami, and how do you work together on your designs?

My Dami (she’s 19 years old and a freshman in college) is a prolific knitter. For a couple of years, she helped me by knitting the samples for my designs. In 2016, she had an idea for a pair of socks inspired by the TV show Elementary. Once she designed those, she continued with eight further patterns and she is now working on a collection of patterns inspired by one of her favourite musicals, Hadestown. We haven’t both collaborated on singular designs, but rather design our own things that then come together in a collection or book.

Our pattern design inspirations range from geeky things like Doctor Who and Elementary, to TV shows such as Gilmore Girls and Outlander, to coffee, to colourways that demanded to be something, to locations such as the city of Edinburgh, and more.

I need to connect to the specific thing that inspires me (whether it’s a TV show or a colourway or a location or a coffee drink) first and then the design flows out of that.

PINK!!!!!!!!!! Always PINK!!!!!! (Although I have surprised some people recently by sharing that my second favourite colour is orange, not bright orange, but rather that autumnal burnt orange.) I love PINK so much that we designed an entire book inspired by the colour (Tickled PINK ~ two designers, four indie dyers, eight PINK-tastic patterns).

In a coffeeshop with a cuppa coffee (what kind varies by the season, pumpkin spice lattes are my absolute favourite) with either a good friend to chat with or a good book to read or an intriguing podcast to listen to.