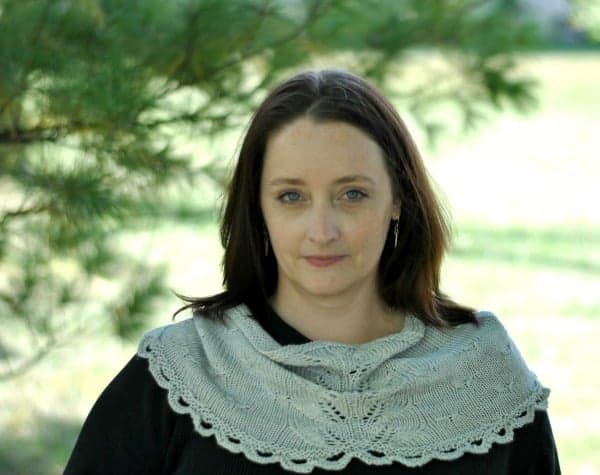 When designer Mindy Wilkes first posted to my site in January of 2016, I was thrilled. I of course knew Mindy from her Holden shawlette, which was one of the first shawls I considered knitting (it’s still in my Ravelry favorites to knit… someday).

I was also thrilled when Mindy agreed to be one of the four designers for the 2017 Where We Knit yarn club. I decided to pair her with Victoria of Eden Cottage Yarns, and I knew she would make Victoria’s soft colors sing. Her design for the club, The Magic Hour, is now available for sale. I still have to block mine, but it is the perfect spring/summer shawlette, and would look great in either a subtle color or a bold semisolid yarn. I recently spoke with Mindy about how she became a designer and what inspires her elegant accessories:

Your first design, Holden, was actually recommended to me by an LYS owner when I first started knitting! Can you tell me how the design came about and how it took off?

I designed Holden because I wanted to knit a shawl that was mostly stockinette with a wavy edge at the bottom. I searched Ravelry for almost a year thinking that someone had designed something like what I wanted, but I couldn’t find it. I ran across an online class called “Design Your Own Shawl” that was taught by Stephanie Japel, and Holden was the result of that class. I had no idea the pattern would become as popular as it did and that it would result in me working as a designer. I’m still kind of in shock now, almost seven years later, that the pattern took off like it did.

I taught myself how to knit from Debbie Stoller’s Stitch n’ Bitch book back in 2004. I had an odd work schedule with days off in the middle of the week, and I was looking for something to fill my time during those days and ran across the book one afternoon at a bookstore. I initially passed it by, but the next week I ended up buying the book. I had some old acrylic yarn and needles tucked away on a shelf already so I just started following the instructions in the book. I learned to knit and purl by knitting endless swatches. Swatch after swatch after swatch. I wouldn’t let myself start an actual project until I felt like I had “perfected” everything so I knit garter stitch swatches, stockinette swatches, ribbed swatches, moss stitch swatches, and on and on for several months.

What did you do before becoming a knitwear designer and how does that inform your work?

After graduate school, I worked as a microbiologist in a consumer product testing laboratory for five years. When my son was born, we decided that I would stay at home instead of working at an outside job. I designed Holden when my son was not quite 3 years old. Writing a pattern is a lot like scientific writing. It’s all a form of technical writing, and I use those technical writing skills every time I write a pattern.

It depends. Inspiration can come from a color or a picture. It can come from a TV show. Sometimes it comes from a stitch pattern in a stitch dictionary; one that I might have passed by a hundred times becomes just right the very next time I see it. Everything I do always has some draws from where I’m from. I’m originally from the Huntington, West Virginia, area, and I’m really inspired by and connected to Appalachia. There’s a very unique culture and tradition of handcrafts in Appalachia, and I’m exploring that more and more in my work.

I usually start with the charts. Sometimes it’s as easy as charting the pattern and casting on. More often than not though, I play around with the charts, switching up stitch patterns, altering shaping, until I think it will work. I might jot down a few notes on construction, yarn choices, and colors as I go, but charts almost always come first.

My favorite colors for knitting are always changing. When I first started designing, I loved deep jewel tones. I remember a short phase where I was really into dark greens. Right now, I can’t get enough pastels — light pinks, peaches, mint green. I like almost all colors, though. There are a few shades of yellow and orange that aren’t my favorite, but I’ll work with anything as long as it works for the design.

Do you have any plans to design sweaters or other garments, or do you prefer to stick with accessories?

I’m not much of a sweater knitter. I never have been. Accessory knitting has always been my preference so I’ll probably only do accessories. However, there is a sweater quantity of Green Mountain Spinnery Alpaca Elegance sitting next to me on my desk, and there’s a sweater idea that’s been hanging out in my head for a while. So never say never.

I usually knit in the evening on the couch while I’m watching Netflix. That’s my everyday reality. My favorite place to knit is on the front (or back) porch, with a cup of tea, visiting my family at home. At my mom’s house, I try to knit on the back porch where you can hear the coal trains coming and going. I’d give anything to knit on my Grandma’s front porch in the evening, totally surrounded by the hills.